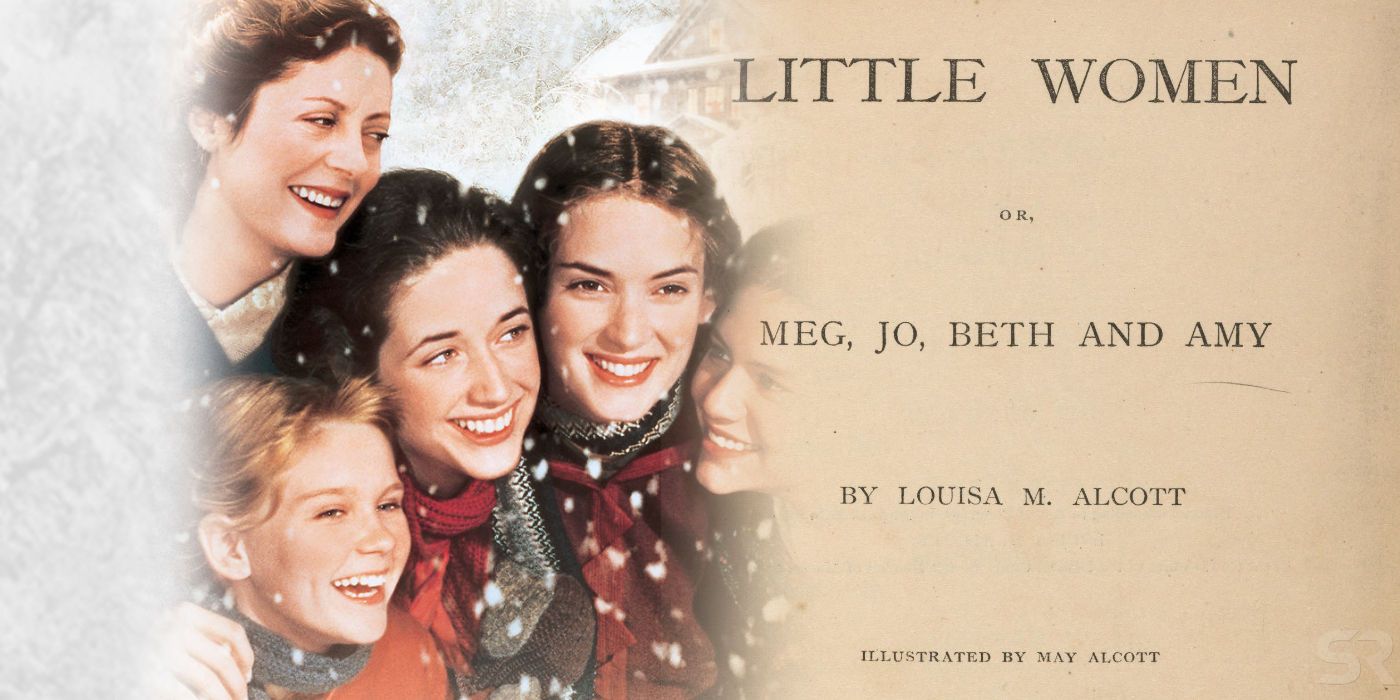 The 1994 movie adaptation of Louisa May Alcott’s classic 1869 novel Little Women, directed by Gillian Armstrong and starring Winona Ryder, is the seventh movie adaptation of the work, and it contains major differences from the source material. The beloved 1994 Little Women movie is often considered by fans to be the definitive version in a long line of adaptations that began in the silent film era and that are still appealing today – with Greta Gerwig’s adaptation of the March sister’s story being the latest iteration.

The new Little Women film, starring Saoirse Ronan, Timothee Chalamet, Emma Watson, Laura Dern, and Meryl Streep, will no doubt invite comparison to the 1994 version, and to the book itself.  Clocking in at just under two hours, the 1994 Little Women movie condenses and changes key elements of the novel for the sake of brevity. It does so brilliantly, and there is good reason Little Women fans return to Armstrong’s version again and again. However, some of the changes to the story affect the overall narrative and meaning of the novel; namely, the novel captures the character growth of the whole March family, while the movie primarily deals with Jo March’s romances.

Little Women is a bildungsroman – essentially a coming-of-age tale. First explored by Goethe in novels written at the turn of the 19th century, bildungsroman typically dealt in the ways a singular male protagonist related to society, and became a man. But Alcott did something new and exciting with Little Women; she focused on the character growth of not just one little woman, but a group of sisters as they came into themselves and their places in the world. In so doing, the March sisters and Alcott’s novel became foundational for girls in America, then and now. It is about the power of family ties, society’s expectations, and of love in all of its forms.

The 1994 Little Women movie uses these themes as a beautiful backdrop, and they’re present in the warm tone throughout the film, in the sister’s relationships, and in Ryder’s excellent performance as Jo March. She’s empathetic, passionate, and strong-willed, just like the Jo from the novel. The movie’s precise focus on Jo’s character and romances takes a sprawling, 500-page, multigenerational novel, and streamlines it into a tight film. However, it also has the unfortunate effect of sometimes playing into tropes on women’s rolls that Alcott’s novel purposely subverted.

Amy & Laurie’s Romance Is Different In The Movie

A prime example of this is the surprising, maybe off-putting, and definitely rushed courtship between Amy and Laurie in the 1994 Little Women movie. In the film, they bump into each other while in Europe: Amy while studying painting with Aunt March, and Laurie while traveling (post-heartbreak) with his grandfather. Within minutes of seeing Amy again, Laurie says he doesn’t love Jo, and begins to pursue Amy. This feels unearned, and frankly a bit callous coming from a character that up to that point had been passionate and sincere, if a bit immature. Although the film implies that time has passed by giving Christian Bale a mustache, Laurie’s explanation for loving Amy is lacking if not a bit creepy – he didn’t love Jo, but is just meant to be a part of the March family.

In the Little Women book, however, Amy and Laurie’s budding romance is allowed to develop over the course of many chapters. Readers can see how much Amy has grown from spoiled child to committed artist, and has matured into an improving moral influence. And Laurie has a lot to improve. His immaturity and laziness, combined with his hurt feelings, have left him mopey and aimless. But through talks with Amy, he is stirred to be better. When Laurie goes to London to become worthy of Amy, it is because he genuinely wants to improve himself, in addition to wanting Amy’s acceptance.

The 1994 Little Women movie, without the context of their deepening relationship, isn’t as effective in showing that Laurie is really changing from the inside. Instead it can seem like he’s just going to London as a means to an end. While this streamlines the marriage plot, it does so at the expense of Laurie’s character growth, making his maturation feel shallow, and allowing the film to spend more time on Jo.

The two proposals Jo receives also differ from the book. When Bale’s Laurie confesses to Ryder’s Jo in the woods, it is passionate and heartbreaking. It’s difficult not to want Jo to just say yes. In the book, however, the ill-advised proposal devolves into petulant bickering, demonstrating the tendencies that would make them a disastrous married couple. In Alcott’s novel, the scene ends with Laurie sulkily paddling off in a boat, and Jo having gone through a rollercoaster of emotions, including anger and frustration. This gets lost in the movie, with Ryder’s performance feeling more conflicted than anything. Her words about their incompatibility seem hollow, and Laurie’s disregard for Jo’s words gets lost in the romantic moment.

The Bhaer proposal is also altered. Both the movie and book versions are very romantic, but just in different ways. The movie has Jo running after Professor Bhaer in the rain, him having unexpectedly dropped by and gotten the mistaken impression that she was married to Laurie. She corrects him, and he tells her he is leaving to go west for a bit. She asks him not to go, and he proposes. She says yes, and they kiss.

In the book, he hasn’t just dropped by, but has been visiting Jo and her whole family for two weeks. They get to know him, he gets to know them, and Jo gets to know what it would be like to have him there all the time. When he proposes, she isn’t chasing after him, and he isn’t chasing after her. In a rejection of this trope, they are walking together, and when the time comes for them to part, Jo can’t bear to see him go. This is the opposite of Laurie’s proposal. Instead they are peers in their feelings – two people who love each other, and can meet each other half-way.

Bhaer and Jo came together while Jo was a governess in New York. This period of the story differs wildly between the book and movie. In the Little Women book, she is seeking adventure, intellectual stimulation, and money to help Beth in her illness. She isn’t running away, but is instead running towards the life that she wants for herself. She does sense that Laurie might be interested in her, and likes the idea of putting distance between them, but that is not her primary goal in going to New York. Critically, Laurie doesn’t propose until after she has returned home.

In the Little Women movie, it is the opposite. Laurie flees to Europe, and Jo goes to New York, like a sort of fresh start after Laurie’s failed proposal. This transforms Laurie’s romantic interest in Jo from an aspect of their relationship, to being a main motivator in her life, complicating the theme of women’s self-determination that was so important to Alcott.

Alcott’s Little Women book ends with the March family altogether – three generations – celebrating Marmee’s 60th birthday. Readers can see how much has changed from the opening of the novel; the little women are without Beth, with children and husbands, and with a wealth of new experiences. Meg, Amy, Jo, and Marmee take stock of their lives, and decide that they are happy. The Little Women movie ends instead with Bhaer’s proposal to Jo and their kiss; romance and its impact on Jo’s life remains central. This makes for a heartwarming, satisfying ending, but also shows a clear shift in storytelling priorities.

Both endings make for impactful coming-of-age stories, and both are close to fans’ hearts. But the fact that the 1994 Little Women movie focused so heavily on Jo’s romances lays bare all of the opportunities in the source text that remain to be explored. It will be very interesting to see how Gerwig’s interpretation takes up the multitude of themes in Alcott’s Little Women, and how that compares to the classic films that came before.

More: Every Movie Releasing In December 2019

Emily Injeian is a writer based in NYC. Her projects include a hodgepodge of copywriting, entertainment content, and the occasional self-deprecating blog post. She has soft spots for cozy British murder mysteries, good acting in bad shows, and movies where the dog survives to the end. She is currently writing on all of these topics and more for Valnet, Inc. as a part of Screen Rant.