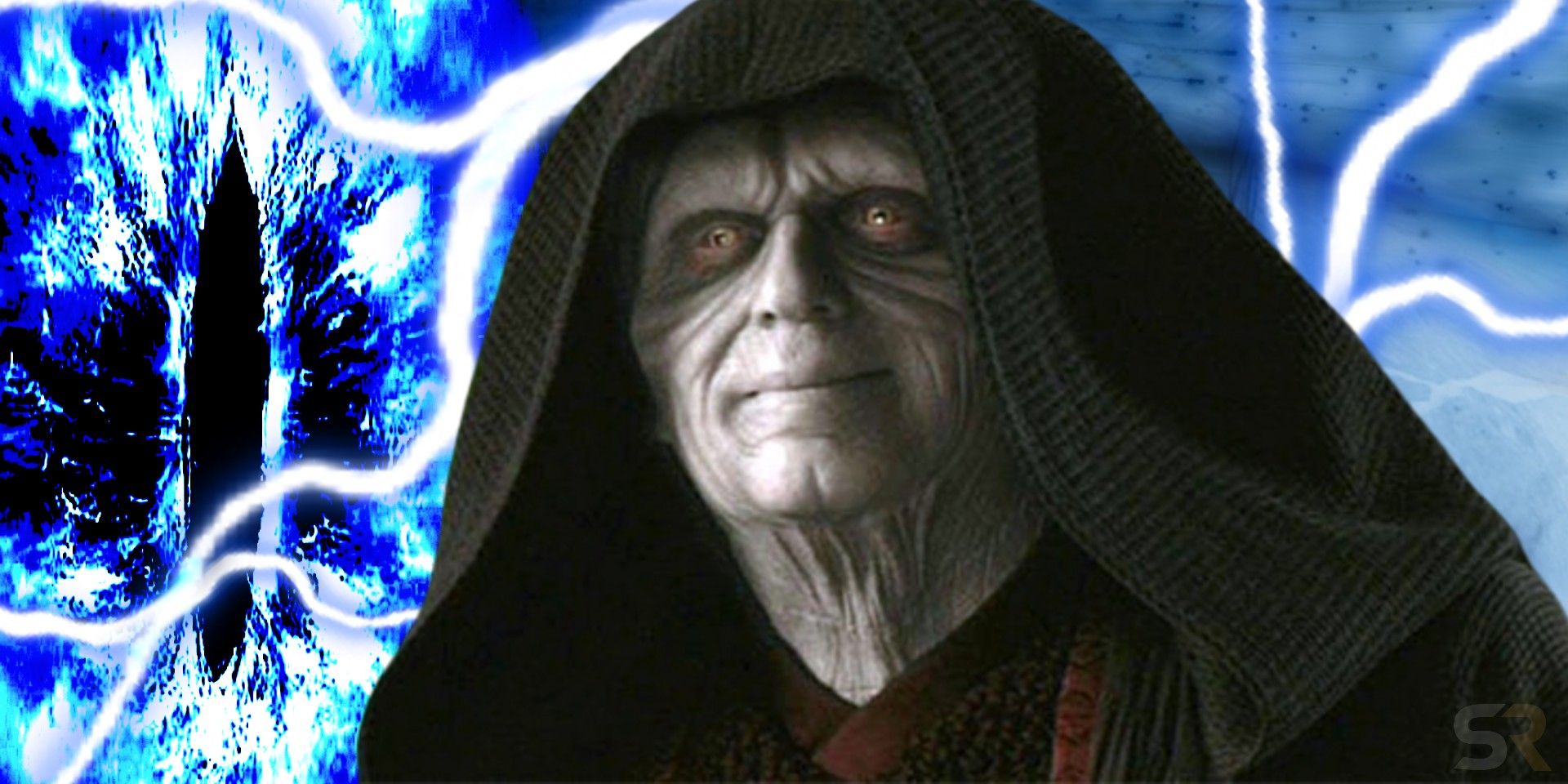 Star Wars: The Rise of Skywalker could reveal that Palpatine has survived death due to becoming an avatar of the dark side. The greatest Dark Lord of the Sith, Palpatine has essentially become the great villain of the entire Star Wars saga. The prequel trilogy is about his rise to power, the original trilogy about his apparent defeat, and now the sequels tell the tale of his return.

But just how has Palpatine come back from the dead? Lucasfilm is keeping this mystery close to their chest, to the extent that they’re avoiding showing even a glimpse of Darth Sidious in the trailers. The best look to date was in a poster released at the D23 Fan Expo, in which Palpatine looked frankly cartoonish. Even voice-overs have been limited to strangely ambiguous dialogue – right up until a final trailer released in the immediate build-up to Star Wars: The Rise of Skywalker. In this clip, Palpatine tells Kylo Ren that he is the one responsible for seducing him to the dark side. “My boy, I have been every voice you have ever heard inside your head,” the Dark Lord declares, his voice alternating between Palpatine, Supreme Leader Snoke, and Darth Vader.

But in order to understand the mystery of Palpatine’s resurrection, it’s necessary to look beyond the films themselves. Back in February 2017, Lucasfilm published Chuck Wendig’s novel Aftermath: Empire’s End. It featured a plot by Palpatine loyalists to “enflesh” the Dark Lord of the Sith once again. At the time, they were dismissed as the ramblings of madmen, corrupted by the dark side; but looking back, these books could have already explained away just how Darth Sidious has come back from the dead.

Palpatine’s Ultimate Goal Was To Conquer The Dark Side

It’s important to begin with an understanding of the difference between a Jedi and a Sith. A Jedi submits themselves to the will of the light side, allowing it to lead them and to guide them. In contrast, a Sith seeks to exert their own will upon the Force itself; the dark side is as much a manifestation of their ego and lust for power as anything else. Palpatine was the greatest of the Sith, and as such he succeeded on a scale that’s never been seen before. The prequels reveal that he successfully bent the Force to his will, so much so that Yoda talked about “the shroud of the dark side” concealing everything from the Jedi. He ultimately conquered the entire galaxy, establishing an Empire that ruled by fear and constructed planet-destroying superweapons.

But Darth Sidious didn’t just intend to be Emperor for a time. He sought a way to make his rule eternal, and Star Wars canon has already shown his interest in everything from essence transfer to cloning. All this is perfect in accordance with Star Wars: Episode III – Revenge of the Sith, where Palpatine seduced Anakin Skywalker with the Tragedy of Darth Plagueis the Wise. ”The dark side of the Force is a pathway to many abilities some consider to be unnatural,” Palpatine observed, as he spoke of the possibility of eternal life. Those words now seem prophetic.

Palpatine Sought The Source Of The Dark Side

The various Star Wars tie-ins have also demonstrated that Palpatine was obsessed with an area of space known as the Unknown Regions. Aftermath: Empire’s End describes this as “an unexplored infinity… closed off by a labyrinth of solar storms, rogue magnetospheres, black holes, gravity wells, and things far stranger.” There was a reason for his fascination; it was because, as he grew in the dark side of the Force, Palpatine sensed something out there in the Unknown Regions. One of the Emperor’s closest aides, Yupe Tashu, remembered:

“The Emperor was convinced that something waited for him out there — some origin of the Force, some dark presence formed of malevolent substance. He said he could feel the waves of it radiating out now that the way was clear. The Emperor called it a signal — conveniently one that only he could hear. Even his greatest enforcer, Vader, seemed oblivious to it, and Vader also claimed mastery over the dark Force, did he not? Rax believed Palpatine had gone mad.”

It all sounds similar to a concept explored in The Clone Wars, where Anakin Skywalker, Ahsoka Tano, and Obi-Wan Kenobi found themselves meeting with beings who were avatars of the light and dark sides of the Force. In Palpatine’s case, though, he wouldn’t seek out “some origin of the Force” purely out of interest; he’d have wanted to find it in order to conquer it, to bend the Force itself to his will. If he succeeded in finding this mysterious Force nexus, then it’s entirely possible he essentially became the dark side.

What Happened When Palpatine Was “Killed?”

If this theory is correct, then it’s no wonder Palpatine wasn’t killed in Return of the Jedi. You can no more kill Darth Sidious, after all, than you can destroy the dark side itself. All you can do is destroy his body; his consciousness would remain, dwelling within the darkness, manipulating everyone and everything. That would explain why, in Aftermath: Empire’s End, Leia sensed a dark presence already watching over the child then in her womb; Palpatine knew that the line of the Chosen One was powerful, and had already decided what he must do. From that moment on, the dark side was manipulating Ben Solo, carefully seducing him. That fits perfectly with the trailer for Star Wars: The Rise of Skywalker; ”I have been every voice you have ever heard inside your head,” Darth Sidious observes. Finally, one fateful night, Jedi Master Luke Skywalker came to his nephew’s room and sensed the darkness. Did he actually detect the dark side in Ben, or did he – for a fleeting moment – become half-aware of Palpatine’s presence? If the latter, it’s no wonder Luke triggered his lightsaber, unwittingly playing into Palpatine’s hands.

The Destruction of Hosnian Prime Allowed Palpatine To Return

The various trailers for Star Wars: The Rise of Skywalker appear to suggest the Emperor has regained physical form. The old Expanded Universe may offer a hint as to how; one of its more interesting concepts was that of a “wound in the Force,” a tear created by a moment of significant death. Obi-Wan Kenobi sensed such a wound when Alderaan was destroyed in the first Star Wars film, and it’s the reason certain locations – like the cave of Dagobah in The Empire Strikes Back – have a lasting dark side taint. One Star Wars comic has recently incorporated this back into the canon. In theory, then, all it would take is an act of destruction on a planetary scale to so damage the Force that Palpatine could restore himself.

This almost happened in the Aftermath trilogy itself, which revealed Palpatine’s Contingency, a horrendous plan he had put in motion in the event of his demise. The Contingency culminated in a battle over the planet Jakku, with the remaining Imperial forces waging war against the armies of the New Republic. In reality, Jakku was a trap, the entire world primed to explode and destroy every starship around it. Meanwhile, Palpatine loyalists were preparing to perform a mystery ceremony – potentially one that would allow Palpatine to take advantage of the carnage and recreate his body. Fortunately, the plan went wrong; the planetary detonation was averted, and the ceremony was interrupted.

But Palpatine wouldn’t have given up. From within the dark side, he would have continued manipulating events to create another opportunity. In the end, the First Order could have provided it when they fired Starkiller Base, and destroyed Hosnian Prime. Such an ecumenopolis would presumably have a population of billions; it may even have been comparable to Coruscant, which had a population of over 1 trillion at its height. This horrific act of destruction could well have secretly served Palpatine’s purposes, the sacrifice he needed in order to incarnate himself.

If this theory is correct, then the prophecy of the Chosen One finally makes sense. Palpatine truly is the one who knocks the Force out of balance, simply because he is the Sith Lord who successfully bends the dark side itself to his will. Given Anakin Skywalker became a Force Ghost, at one with the light side of the Force, it’s entirely possible that he is yet to fulfill his destiny as the Chosen One – and that he will do so from beyond the funeral pyre, as he somehow helps Rey in her battle against the Emperor returned.

More: Everything We Know About Palpatine’s Role In Star Wars: The Rise Of Skywalker

Tom Bacon is one of Screen Rant’s staff writers, and he’s frankly amused that his childhood is back – and this time it’s cool. Tom’s focus tends to be on the various superhero franchises, as well as Star Wars, Doctor Who, and Star Trek; he’s also an avid comic book reader. Over the years, Tom has built a strong relationship with aspects of the various fan communities, and is a Moderator on some of Facebook’s largest MCU and X-Men groups. Previously, he’s written entertainment news and articles for Movie Pilot.
A graduate of Edge Hill University in the United Kingdom, Tom is still strongly connected with his alma mater; in fact, in his spare time he’s a voluntary chaplain there. He’s heavily involved with his local church, and anyone who checks him out on Twitter will quickly learn that he’s interested in British politics as well.

Hideo Kojima Reveals Halted Project Similar to “The Boys” That Would’ve Starred Mads Mikkelsen
The Best Hair Dryers Of 2022 To Level Up Your Locks
The doctor will see you now… Henrik Fexeus
Hayden Christensen Shares How His Daughter Helped Him Prepare for Obi-Wan Kenobi
Ahead Of His Zeus Debut In Thor: Love And Thunder, Russell Crowe Is Joining A Supernatural Thriller