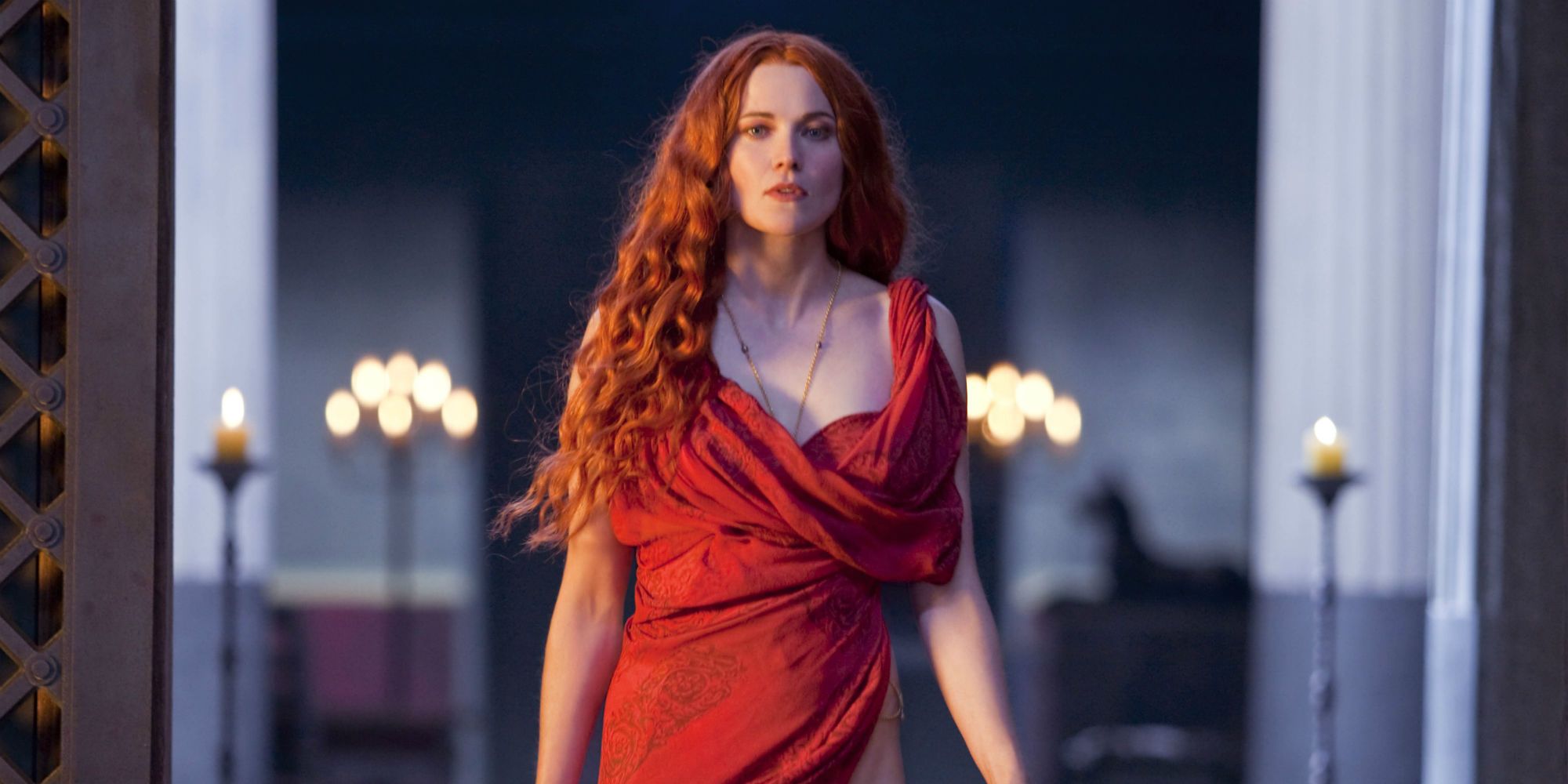 With her performance as the power-hungry Lucretia on Spartacus, Lucy Lawless crafted one of TV’s most complicated yet compelling villains. Perhaps surprisingly for a series set in uber-patriarchal Ancient Rome with more than its fair share of sex and violence, Spartacus had plenty of strong and multifaceted female characters – both villainous and otherwise. One of the show’s standout female antagonists was Lucretia, the upwardly mobile wife of gladiator trainer Batiatus (John Hannah).

Lucretia spent most of the first season, Spartacus: Blood And Sand, plotting and scheming to elevate her and Batiatus’ status in Roman society. Her Machiavellian ways were made clear when Lucretia masterminded a situation that placed her higher-ranking frenemy Ilithyia (Viva Bianca) in the palm of her hand. After Ilithyia expressed an interest in a night of passion with Lucretia’s gladiator lover Crixus (Manu Bennett, Arrow), she instead tricked her into sleeping with her husband Glaber’s (Craig Parker) mortal enemy Spartacus (Andy Whitfield). After Lucretia and noblewoman Licinia (Brooke Harman) accidentally-on-purpose caught her in the act, Ilithyia brutally bludgeoned the latter to death for mocking her. Conveniently, Licinia’s murder gave Lucretia something to blackmail Ilythia and Glaber with, which resulted in her and Batiatus moving a couple of rungs up the social ladder.

While Lucretia emerged as an unscrupulous character at first, the prequel season Spartacus: Gods Of The Arena delved into parts of her past that went some way to explain the villain she became. A softer side of Lucretia came out as she mourned the death of closest friend Gaia (Jaime Murray) and she was heartbroken to learn her beloved husband Batiatus was disappointed she hadn’t given him an heir yet. Thanks to a layered performance from Lucy Lawless, Spartacus’ prequel season had viewers feeling sympathy for a character that previously didn’t seem deserving of any.

Even in her more depraved phases, Lucretia was more than just a one-note villain. At the end of Spartacus season 1, Lucy Lawless gave an amazing turn as a pregnant Lucretia was stabbed by Crucix – killing the baby he fathered she was going to pass off as Batiatus’ heir – and again when she watched her husband die by Spartacus’ hand. In the second season, Spartacus: Vengeance, Lucretia was both scheming and tragic. While clearly devastated by her social downfall and possibly driven mad with grief over the deaths of Batiatus and her unborn child, Lucretia nevertheless spent most of the season plotting her revenge against Ilithyia for her part in the House of Batiatus massacre.

By the end of Spartacus: Vengeance Lucretia’s arc was complete. In her final insane moments, Lucretia stole Ilythia’s newborn son – believing him a gift from the gods to replace the child she lost – and threw both herself and the child off a cliff in the hope they’d be reunited with Batiatus in the afterlife. Yet even during her disturbing death scene as she took out an innocent baby with her, Lucy Lawless’ performance made Lucretia one of the most compelling and complex villains not just on Spartacus but TV overall.