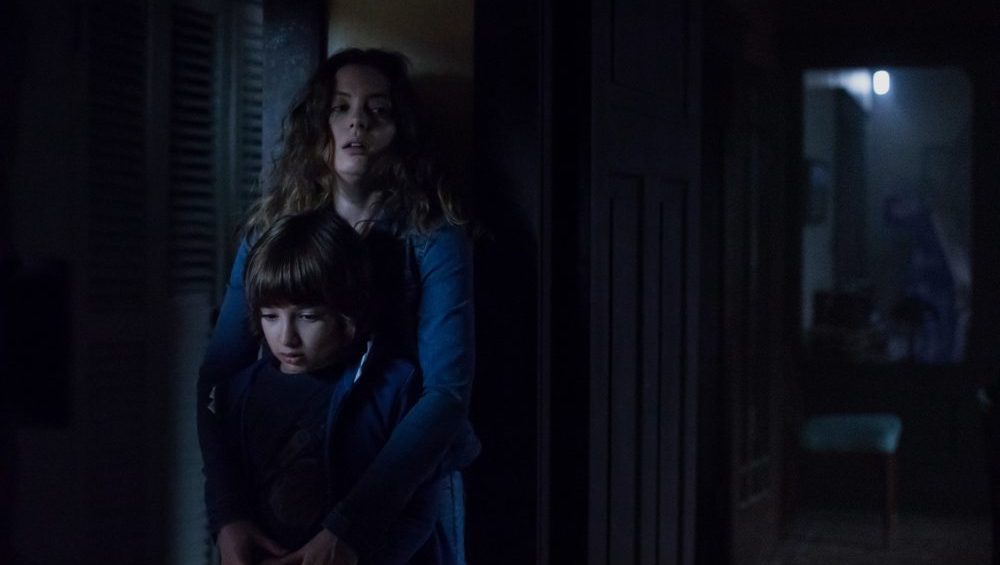 This weekend is Halloween and Focus Features is delivering some scares with the Jacob Chase-directed horror Come Play, which opens in theaters starting today.

Come Play is based on Chase’s 2017 short film Larry. The feature version which is dubbed as “a terrifying new vision in horror” follows Oliver (newcomer Azhy Robertson), a lonely young boy who feels different from everyone else. Desperate for a friend, he seeks solace and refuge in his ever-present cell phone and tablet. When a mysterious creature uses Oliver’s devices against him to break into our world, Oliver’s parents (Gillian Jacobs and John Gallagher Jr.) must fight to save their son from the monster beyond the screen.

The horror film was set to open in theaters on July 24, but like all movies, the release date shifted due to the pandemic. However, to release the movie on Halloween weekend seems more appropriate. Sony opted to release their Halloween fare, the witchy sequel The Craft: Legacy on PVOD while Netflix’s His House (more on that below) debuts on the streamer today. So, Come Play is one of the only horror pics opening in physical theaters this weekend.

Audiences will be able to take a bite out of The Donut King this weekend. Directed by Alice Gu and produced by Ridley Scott, Greenwich Entertainment will release the docu in select theaters and virtual cinemas starting today.

The Donut King, which was honored with Special Jury Recognition for Achievement in Documentary Storytelling at SXSW, tells the unlikely story of Ngoy, a Cambodian refugee who arrived in America in 1975 with nothing and set out to build a multi-million-dollar empire by baking America’s favorite pastry, the donut.

Ngoy soon found himself living a classic rags to riches narrative after sponsoring hundreds of visas for fellow Cambodian immigrants, helping them get on their feet in a new land by teaching them the ways of the donut business and amassing a small personal fortune. By the mid ’90s, Cambodian-Americans owned nearly 80% of the donut industry as a result of his influence. The Donut King tells us the ups and downs of Ngoy’s pursuit of the American Dream. It also explains why there are barely any Dunkin’ Donuts or Krispy Kremes in the greater L.A. area.

The True Adventures of Wolfboy is self-explanatory — for the most part.

Directed by Martin Krejcí and written by Olivia Dufault, Jaeden Martell stars as Paul, who lives an isolated life with his father in upstate New York. He finds making friends impossible and feels like an outcast due to a rare condition he has known as congenital hypertrichosis – an affliction that causes an abnormal amount of hair growth all over his face and body. But things change on his 13th birthday. He receives a mysterious gift that compels him to run away and seek out the mother he has never known.

The film marks the feature directorial debut of Krejcí and the first feature script for Dufault, who served as executive producer on the third season of FX’s Legion. Dufault has been writing the script for nearly seven years. She learned of hypertrichosis (aka Werewolf Syndrome) while in college and felt that it shared some similarities to experiences she was having with body dysphoria while reconciling her transgender identity. She began crafting the story about a “wolfboy” that was navigating the challenges of being different in a two-dimensional world.

The critically acclaimed horror His House is set to bring scares to Netflix.

Marking the feature debut for Remi Weekes, who also wrote the screenplay, the film stars Gangs of London’s Ṣọpẹ́ Dìrísù, Doctor Who alum Matt Smith and Lovecraft Country queen Wunmi Mosaku. The film follows a young refugee couple escaping from war-torn South Sudan. They arrive in a small English town thinking that the worst is behind them, but as they adjust to their new life in their new home there is an unspeakable evil lurking beneath the surface.

His House, which came from a story by Felicity Evans and Toby Venables, made its world premiere earlier this year at Sundance in the Midnight Section. Netflix got the jump on it and acquired the world rights before it was even seen by an audience. Based on the trailer and its timely premise, His House is serving up some serious Get Out meets Conjuring vibes. It’s another pic to send chills down your spine this Halloween weekend.

Based on a true story, Blackjack chronicles the basketball legend Jackie Ryan (Greg Finley), who was also known as a hot-tempered and self-centered Brooklyn native. His dreams of playing professional basketball seem to have passed him by after years of hard partying and neglect.

He works construction alongside his overbearing father (David Arquette), and his best friend Marty (James Madio). After being spotted at the famous West 4th basketball court for his incredible talent, Ryan is invited to try-out for the New Jersey Nets and is forced to confront his inner demons, family conflicts, relationship drama, and turn his life around

The documentary Wolfman’s Got Nards has an interesting title, but a particular generation of adults knows exactly what the catchphrase is referring to. Wolfman’s Got Nards puts a behind the scenes spotlight on the 1987 cult classic The Monster Squad — and it’s only appropriate that Andre Gower, the star of the movie, directs. Gravitas Ventures released the docu on demand on October 27.

When it was first released, The Monster Squad was deemed a flop, but over three decades it amassed a huge following and eventually turned into a cultural phenomenon. Wolfman’s Got Nards (a popular quote in the movie) explores the relationship a dedicated audience (including celebrities and filmmakers) has with the movie. The documentary takes an in-depth look into the film’s conception, response, cult status and revival. Through interviews with the cast, crew, screenwriters, directors, academics and original reviewers as well as through never-before-seen footage, it turns the lens on an audience of self-proclaimed misfits who have kept The Monster Squad alive for more than 30 years. The documentary features Fred Dekker, Shane Black, Seth Green, Ryan Lambert, Ashley Bank, Adam F. Goldberg, Heather Langenkamp, Chuck Russell, Adam Green, Joe Lynch, among others.

First-time filmmaker Hasan Oswald debuts his Slamdance film Higher Love on November 3. Following the lead of Robert Rodriguez’s zero-budget strategy to make the film, Higher Love follows Camden native Daryl Gant. He is a father of eight and a printing press operator. He was raised by a single mother and strives to be a better father than his own, who abandoned him at birth.

His girlfriend, Nani, is the love of his life but struggles to cope with a crippling crack and heroin addiction. More troubling is that Nani is pregnant with their new baby boy, Darnez. As the two struggle to reconcile their past with their present, Daryl tries to rescue Nani from her close-knit group of drug users. It becomes Daryl’s new-found purpose to forge a better future for them and their baby boy.