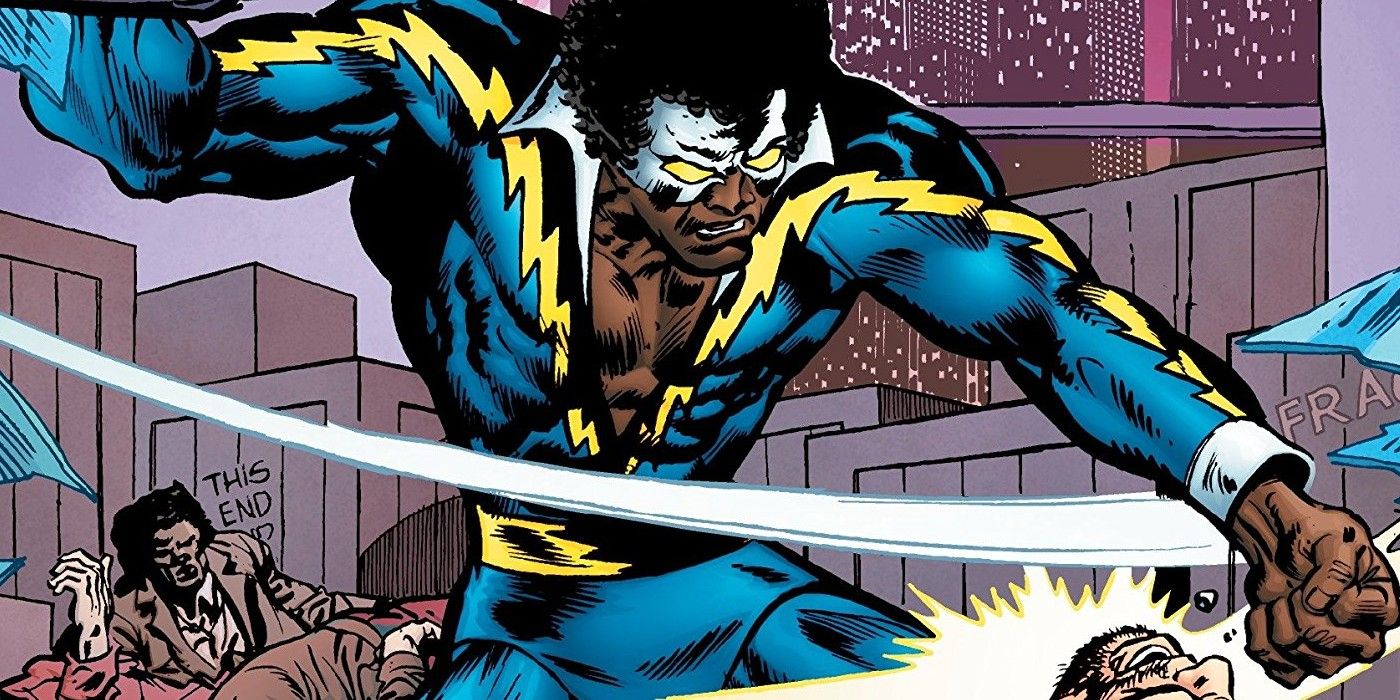 In screenwriter John Ridley’s upcoming miniseries The Other History of the DC Universe set decades in the past, Black Lightning will return to his instantly recognizable iconic 80’s costume.

The Other History is written by Ridley (12 Years A Slave, American Crime) and will be illustrated by Giuseppe Camuncoli (Hellblazer, The Amazing Spider-Man) along with Andrea Cucchi. The Other History of the DC Universe was inspired by a series of a similar name, published in 1986 called History of the DC Universe which followed a wide selection of popular Justice League members. With The Other History, Ridley will bring to light the oft-neglected perspectives of DC’s minority superheroes, such as Bumblebee, Herald, and Renee Montoya’s the Question among a few others.

Related: Black Lightning is Getting An Amazing Upgrade in DC Comics

In a recent interview with Entertainment Weekly, Ridley discussed what readers can expect in the miniseries, citing his own experience as a black man. He also revealed The Other History’s first official preview, which depicts Black Lightning taking on street-level crime, dressed in his memorable 80’s costume which was fashionable for the times. While on the job and gaining popularity in newspaper headlines, Superman takes notice and visits Black Lightning. The preview can be seen below:

It seems that Black Lightning’s superhero career will be contrasted with Superman, who has always represented American ideals, especially in this time period as the Christopher Reeves movies were going strong. Now that Black Lightning has crossed paths with the Man of Tomorrow, it raises a few questions as to how their relationship might be depicted. As Superman hovers over and Black Lightning looks up, the dynamic comes across as potentially tense. Superman recognizing the hero could either be an endorsement of his crime-fighting, or it could be setting up a thread of mistrust and division which could develop throughout the miniseries. This potential dynamic hints that it might be in the same continuity as the 1986 series that Ridley had referenced, which opens up an entire range of possibilities as the five issues have been said to focus on memorable DC events.

Since the miniseries is being published through DC Black Label, known for more mature content set outside mainstream continuity, readers can expect an honest and uncensored approach to the material. With the current political season, The Other History of the DC Universe will surely offer commentary to issues of humanity that aren’t typically explored by the publisher. As far as Black Label goes, this is the first book taking serious advantage of the opportunity to depict matters of race and is unlikely to be the last. After being in the works for the past two years, the five-issue miniseries starring Black Lightning will finally debut later this month on November 24.

More: Black Lightning is Officially One of DC’s Strongest Heroes

Timothy Mably is a comics news writer for Screen Rant. His passion for storytelling was instilled at an early age, and has evolved into his pursuit of journalism. He recently graduated from the Walter Cronkite School of Journalism with a degree in communications. Timothy currently lives in Los Angeles, California.