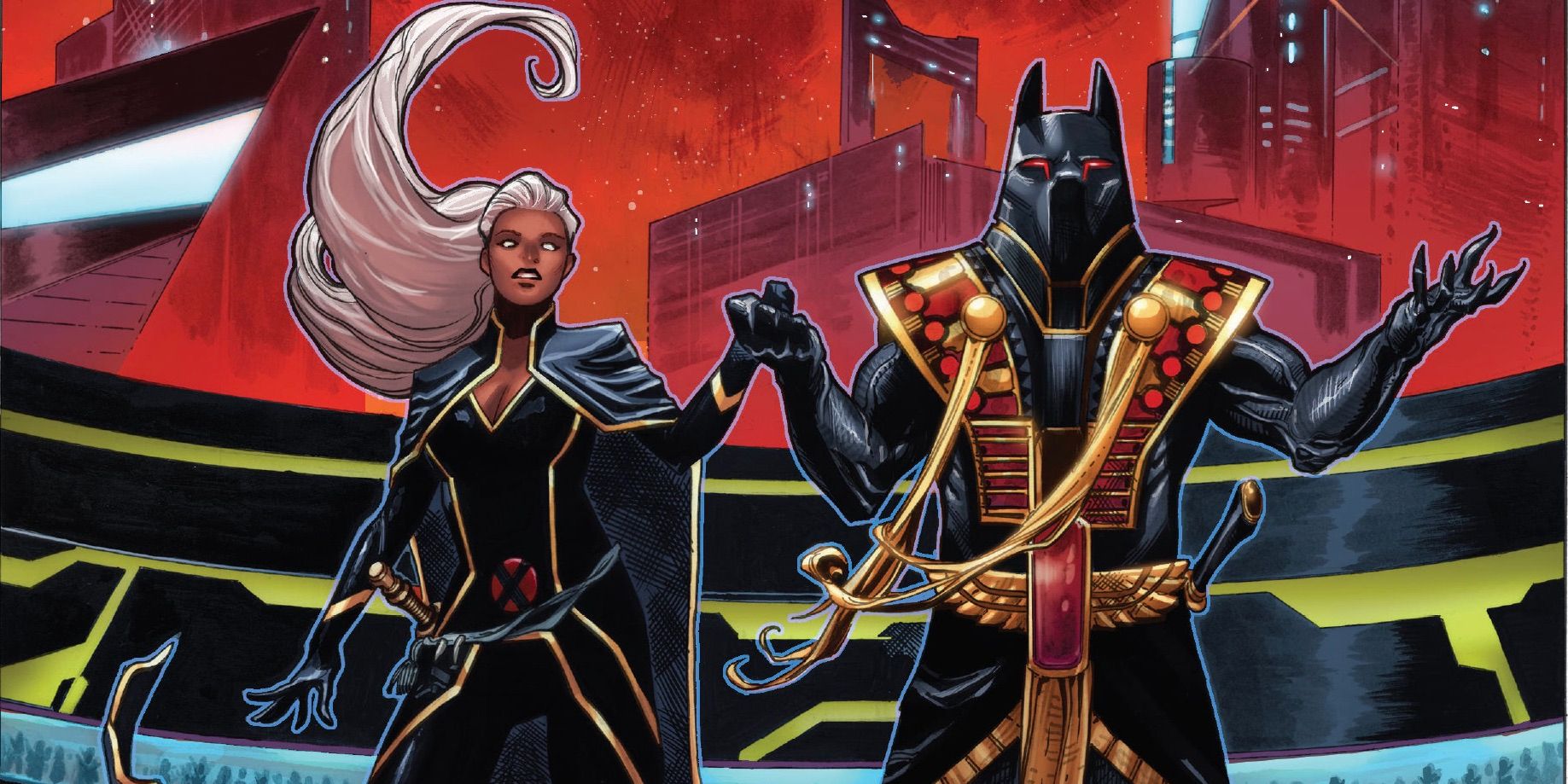 Marvel’s X of Swords event is currently sprawling across the X-Men titles, making each feel like an extension of the others as the tournament cannons towards its conclusion. There have been many surprising moments so far, but X-Force #14 just arrived to remind fans exactly why they should root for the home team. This month’s X-Force #14, written by Benjamin Percy and Gerry Duggan, with art by Joshua Cassara, offers readers a glimpse of what X of Swords could’ve been; an epic high-concept duel between two powerful champions.

In the same issue that sees Krakoa lose a disco-dancing contest, Wolverine lose a fashion show, Magik lose a spelling bee, and Gorgon attempt to have sex with a magical boulder, readers get a brief glimpse of greatness. The next duel to the death pits the X-Men’s Storm against the Horseman of Apocalypse known as Death. If that weren’t enough, the other team isn’t interested in playing fair.

Related: The X-Men Are About To Face The Army That Killed The Avengers

In last week’s Wolverine #7, by the same creative team, Storm and Wolverine appeared together in a bar somewhere in the Crooked Market for a friendly drinking contest, after an exhausting day of ludicrous challenges. Unbeknownst to them, however, the proprietor had been bribed by Death of Arrako to slip them the Otherworld version of a Mickey Finn. Flash forward to X-Force #14, and a hungover Storm is teleported to her next arena. She quickly discovers that she has been more than poisoned by whatever foul brew was served to her and Logan, because her powers have been mysteriously depleted. She can’t fight; in fact, she can barely stand.

And yet, Storm finds herself facing Death in a staging ground surrounded by a horde of vampiric undead. It’s a duel in which the first drop of blood will whip the thirsty creatures surrounding them into a frenzy – the exact kind of high-concept, high-stakes battle X of Swords has been promising from the start. Turns out Death was right to stack the odds in his favor: even without her powers, Storm is a force of nature. The two trade blows, and appear evenly matched, but the tide quickly turns when she destroys her opponent’s sword.

It’s at this point that the Horseman of Arrako decides to remove his helmet and use his powers on Storm, but it’s too late and Storm presses her advantage and delivers a piercing stab deep enough to make Death bleed. Smelling blood, the ravenous vampires descend upon the fallen Horseman, prompted by Storm. This isn’t just the coolest duel in X of Swords by far; it may be very well be Marvel’s coolest duel ever. In an event where many fans have complained that the majority of competitions have felt like comedy filler, this clash makes it clear Jonathan Hickman – Marvel’s Head of X -  is rightly assured that the event has the stand-out moments to deliver on its premise. Meanwhile, Storm proves once again that her powers aren’t what make her powerful, bolstering the argument that she’s perhaps the most essential member of the X-Men when the chips are down.

Next: The X-Men Are Prey To The God Of The Symbiotes

Christian is a lifelong comic book reader, cinephile, and storyteller, whose passions led him to studying creative writing in university. Since then he hasn’t stopped exploring new ways to write and share what he loves with readers. He’s recently finished writing the first volume of his own graphic novel, which is currently being illustrated. Until that’s all done, you can find him writing comic book news and features for the good people at Screen Rant.

[Trailer] ‘Mortal Shell’ DLC “The Virtuous Cycle” Arrives August 18th For Consoles And PC, Including Steam
DaBaby dropped from Lollapalooza lineup and replaced by Young Thug after ‘homophobic’ HIV rant
DaBaby issues meagre apology for his ugly homophobia after being dropped by yet another festival
Tierra Whack Shares New Song “Walk the Beat”: Listen
Book Riot’s Deals of the Day for August 3, 2021