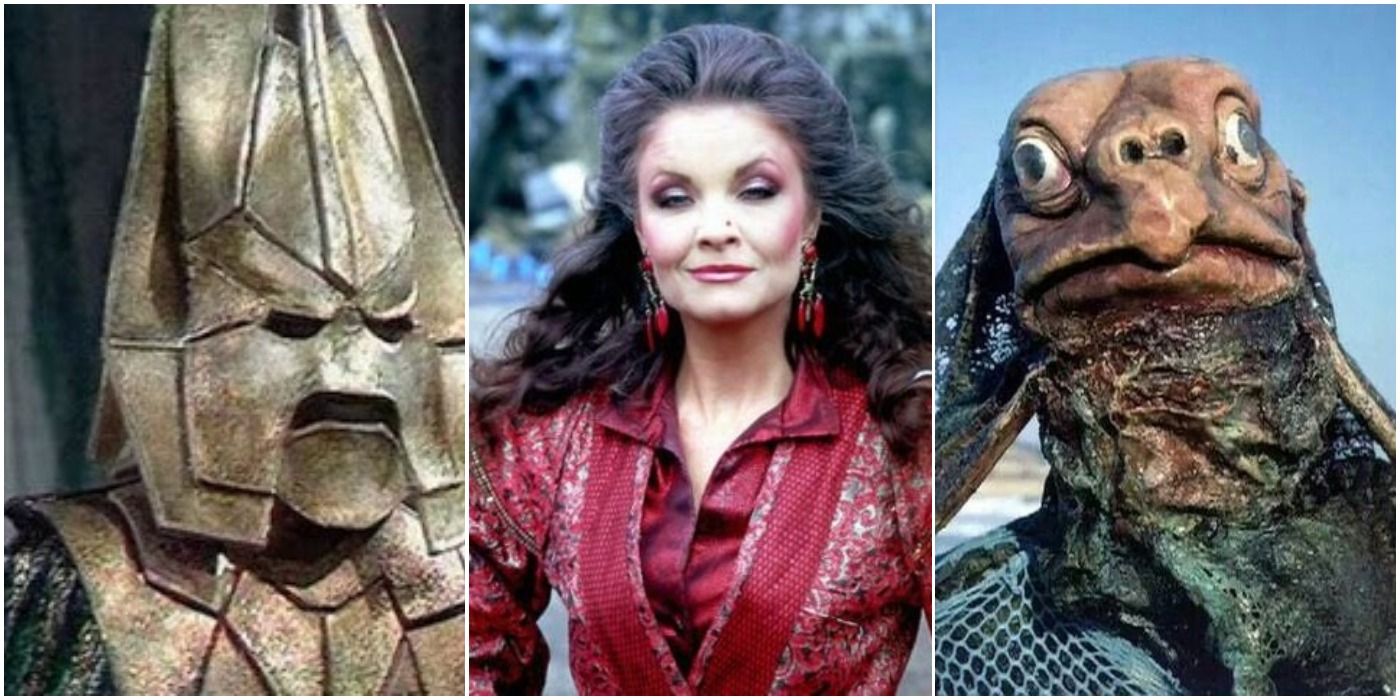 Doctor Who fans have had many reasons to hide behind their sofas over the years. The Time Lord has had to face a variety of monstrous villains, and many of them have been undeniably scary. Unfortunately, some of the villains from the classic era of the show have become lost in time.  The Daleks pop up regularly, of course, and we have seen different versions of the Master. But there are some early Who villains that still haven’t been seen in the rebooted episodes of the show.

RELATED: Which Doctor Who Villain Are You, According To Your Zodiac?

We currently have no idea as to what villains will be in series 13, but here’s hoping some old faces return. While it is right that the program makers should make changes from the original run to refresh the content of the show, we still have hope that the following villains from the classic era are given the opportunity to return.

Okay, so they hardly rank as the greatest villains in Doctor Who history and they are far from the scariest too. But these giant ant-like creatures, who appeared in the 1965 William Hartnell story, The Web Planet, are certainly memorable.

In this classic adventure, the Doctor was caught in the middle of a civil war between the Zarbi and the Menoptra (giant butterflies), with the Zarbi being the foes that caused the Doctor the most trouble. The special effects were pretty terrible at the time, but as technology has now improved, the sight of a revamped Zarbi army marching across the screen would be quite a sight to behold.

First appearing in the Colin Baker serial, Trial Of a Time Lord, The Valeyard proved to be quite an imposing figure. At first, he appeared to be just another Time Lord, albeit one who was hired as court prosecutor in a plot to do away with the Doctor. But there was a twist! The Valeyard was actually a darker version of the Doctor himself who, in the timeline of the series, was supposed to appear sometime after the Doctor’s twelfth regeneration.

Of course, we are unlikely to ever see the Doctor become the Valeyard on the screen, as it would change the course of the show. However, it would be great to see Jodie Whittaker face off against her future self, unless, of course, The Valeyard was one of those previous regenerations that showrunner Chris Chibnall recently introduced into Doctor Who lore.

In the context of the show, Omega was the founder of the Time Lords and according to Jon Pertwee’s Doctor,  he was their ‘ greatest hero.’ But after becoming trapped within the Anti-Matter universe for centuries, Omega’s mind changed, and in his insanity, he started to seek revenge on the Time Lords for ‘abandoning’ him.

RELATED: Doctor Who: 10 Most Iconic Scenes From The Show, Ranked

This vengeful villain first appeared in The Three Doctors, the first-ever multi-Doctor story, and later in The Arc of Infinity. Seemingly destroyed by the Doctor, he has popped up again in the novelized adventures of the Time Lord, so there is still scope to bring him back. Being both the founder and the sworn enemy of the Time Lords, his return could cause major disruption to the life of the Doctor.

The Axons are a favorite of former Doctor, Peter Capaldi, as he once said: “I’d quite like the Axons to show up again, but done with our modern CGI and the make-up techniques that we now have available to us.” Fans are on Peter’s side, as these Jon Pertwee-era villains made a considerable impact when they first appeared back in the 1971 serial, The Claws of Axos.

These beautiful, gold-skinned creatures from space came bearing gifts, but like an unwelcome Christmas visitor, they had a hidden agenda. They turned out to be monstrous, tentacled parasites, hell-bent on consuming the Earth. The Doctor imprisoned them in a time loop, but surely now is the time for their return.

The Sea Devils might look slightly silly, with their reptilian fish-like features. However, the sight of them emerging from the ocean in the classic Jon Pertwee serial was pretty terrifying. Their rasping, whispering voices also sent chills down their spine.

It would make sense to bring them back, as they are distant relatives of the Silurians, who have already made an appearance in the rebooted show. They could be adapted for the new generation of Who fans and one is sure fans of HP Lovecraft would be thrilled to see the Doctor face off against these scaly foes too.

In a serial now lost from the archives, the Celestial Toymaker made an appearance during the William Hartnell-era of the show and proved to be a worthy opponent to the Doctor. With the ability to bend reality at will, the Toymaker created a number of puzzles and games for the Doctor to tackle, but being evil, of course, he rigged these conundrums to his favor.

While only making one appearance in the show, his name has been mentioned by both Colin Baker and Peter Capaldi’s incarnation of the Doctor, so it’s clear he hasn’t been forgotten. With his malevolent use of toys and games, this is one villain who would be ideal for one of Doctor Who’s Christmas episodes.

Morbius was yet another renegade Time Lord, and like the Master, his intentions for the universe were typically evil. Unlike his time traveling counterparts, however,  he was eventually captured and executed, though his brain was removed by one of his followers and given new life in a monstrous form.

Seemingly killed after falling from the edge of a cliff during the Tom Baker serial, The Brain of Morbius, it was later revealed in Doctor Who fiction that he survived. The Doctor called him “one of the most despicable criminally-minded wretches that ever lived,” and for that reason alone, he deserves a TV comeback.

When the White Guardian tasked Tom Baker’s Doctor with a mission to find and reassemble the ‘Keys of Time,’ his counterpart, the Black Guardian was never too far away from our heroic Time Lord. The villain thwarted the Doctor at every turn, and while eventually foiled, he did return to the series to face off against Peter Davidson’s Doctor.

Being the embodiment of evil and chaos, the Black Guardian is a formidable villain that deserves a third opportunity to face off against the Doctor. Despite being consumed in flames during his final appearance, one knows he still exists somewhere in space and time. The White Guardian warned the Doctor that both he and his evil counterpart would continue to exist as long as they were needed, and as the show needs a bit of a boost to its ratings, they are never more needed than now.

Forget the Daleks and The Weeping Angels. The scariest Doctor Who episodes featured these horned creatures. They made their appearance in the eighth season of Doctor Who and were seemingly summoned from the pits of Hell by the Master.

While there is an obvious resemblance to the Devil, Jon Pertwee’s Doctor revealed that they were actually part of an alien race. Still, as the serial featured such things as black magic rituals and gruesome gargoyles, the allusions to Hell were many. And as the Daemons scared many Doctor Who fans, it would be great to see their chilling return in a future episode.

Fans have seen several different incarnations of the Doctor and the Master, so why not have a new regeneration of the Rani? This villainous Time Lady was brought to life by Kate O’ Mara in the later seasons of classic Doctor Who, and she proved to be just as treacherous and evil as the Master.

The Rani was the cause of the seventh regeneration of the Doctor, and as Jodie Whittaker is allegedly leaving the show soon, it would be great to see her battle it out with this classic villain in the next finale.  It would be a fantastic nod to old Who if the Rani is behind her regeneration, and it would set up this fan-favorite character as a series regular for future episodes.

NEXT: Doctor Who: Every Finale, Ranked By IMDb Score

Next
10 Most Unlikely Friendships On TV

Lee Brown is a UK-based freelance writer, and has written movie-related articles for such websites as Flickering Myth, Blasting News, TheThings, and So The Theory Goes. In his spare time, Lee continues to write, focussing on story writing, playwriting, and poetry. Some of Lee’s work has been published in printed and eBook formats, and he has had one play transmitted over local radio. He is an avid movie buff and TV binge-watcher, and probably spends more time than he should sat on the sofa!

Gunna Got Family and Business Affairs In Line Before Turning Himself In
The Rookie Season 4 Episode 22 Review: Day in the Hole
‘Diary of Pamela Voorhees’ – ‘Jason Lives’ Director Reveals His New ‘Friday the 13th’ Idea [Exclusive]
Say “Hi” with These Heartstopper Accessories
“What We Do in the Shadows” Season 4 Premieres on July 12th!