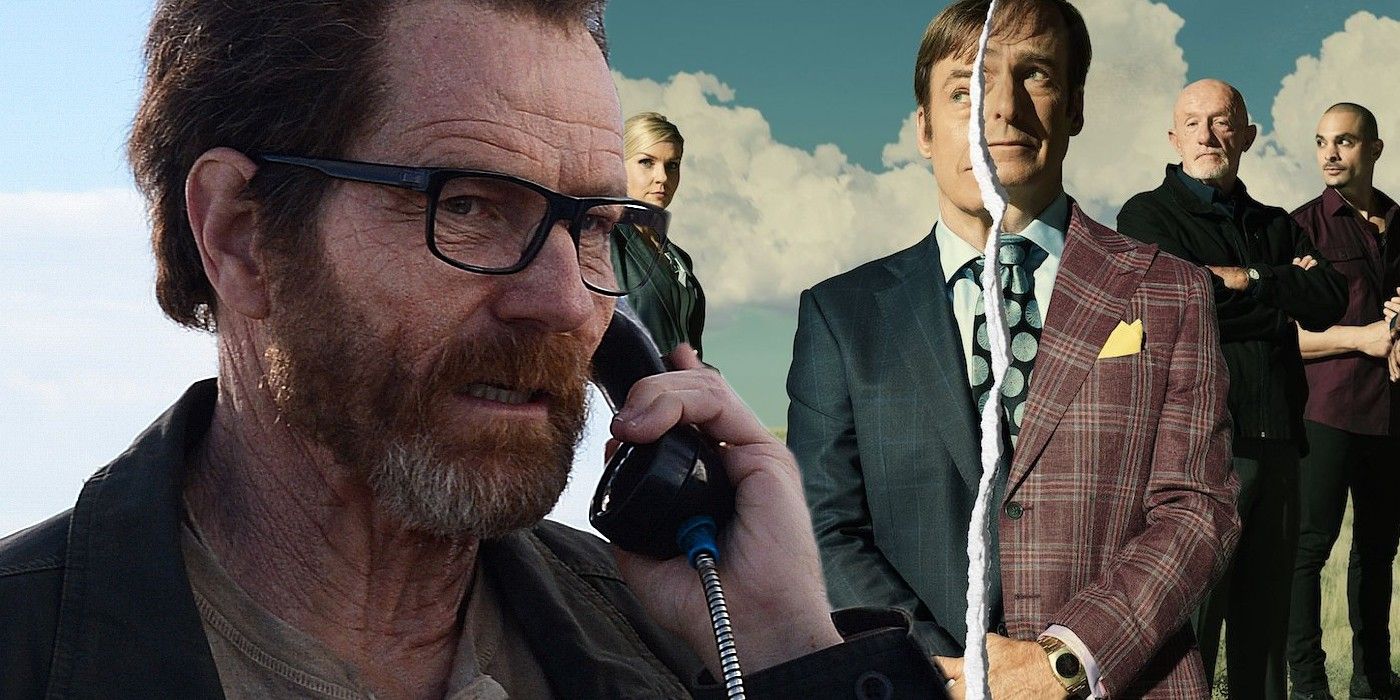 With season 6, Better Call Saul can finally overtake Breaking Bad. Starring Bryan Cranston as a cancer patient turned meth cook, and Aaron Paul as his youthful criminal accomplice, Breaking Bad earned its place among the television greats long before the final season premiered in 2012. With a mixture of timeless performances, expert writing and memorable cinematography, Breaking Bad was a worldwide sensation and a critical darling, and an acclaimed ending cemented the show’s legendary status. Needless to say, Better Call Saul had an incredibly high bar to match.

The prequel (and sequel) adventures of Saul Goodman might not have garnered the same mainstream attention as Breaking Bad, but over the course of five seasons, the spin-off has achieved something close to the quality of its predecessor. Both a fantastic show in its own right and a worthy compliment to Breaking Bad, Better Call Saul has one final season to let out of the bag (and into the river). And since Better Call Saul is already considered more or less on-par with the chronicles of Walter White, season 6 could potentially tip the balance, allowing the student to surpass the master.

Related: Better Call Saul: Every Theory On Where Nacho Is During Breaking Bad

Unless Better Call Saul‘s final season goes incredibly wrong, both shows will be remembered as examples of TV excellence, but what does season 6 need in order to push the spin-off past Breaking Bad?

Far too many good TV shows have been ruined by a sketchy final episode. Whether it be making strange creative choices in an attempt to subvert expectations, or leaving too many storylines open-ended, there’s many a pitfall waiting to ensnare an unsuspecting television finale. Breaking Bad is an all-too-rare example of a concluding episode that mostly everyone loved. Crucially, “Felina” prioritizes satisfying storytelling instead of shock and awe. Most viewers might’ve guessed correctly who would live and who would die, but instead of killing off a major character for shock value or delivering a game-changing nonsensical twist, Breaking Bad‘s finale gives each character a logical, meaningful ending, and a pay-off worthy of the previous four seasons.

In the same way, Better Call Saul‘s final episode will define season 6. It’s almost scary how easily a solid narrative can be knocked down by a naff resolution, and even if every other episode of Better Call Saul season 6 has critics weeping with joy, a lackluster finale could rapidly undo that hard work. Better Call Saul has earned the right to carve its own path, but there are certain notes the spinoff should take from Breaking Bad‘s “Felina” – the Godfather-inspired pacing, the balance between action and emotion, avoiding the temptation to throw in all the ideas just because it’s the last episode, etc. Put simply, Better Call Saul can never eclipse Breaking Bad if the final moments don’t strike a similar sweet spot.

Better Call Saul Season 6 Needs To Up The Intensity

By any measure, Better Call Saul has been a slower burn compared to Breaking Bad, with early seasons closely examining Jimmy McGill‘s legitimate legal career and gradually introducing new faces such as Kim Wexler and Howard Hamlin. Only in its third season did Better Call Saul seriously begin existing within the same criminal sphere as Breaking Bad. This subtler approach has been a double-edged sword – some enjoyed the unique change of pace, while others were disappointed Saul wasn’t waving a gun in his Y-fronts by episode 2. Better Call Saul season 5, however, ramped the intensity right up to the level Breaking Bad fans are accustomed to, and the spin-off’s tone is now far closer to the glory years of Walt and Jesse.

Related: Better Call Saul: Everything That Needs To Happen Before The Ending

Better Call Saul season 6 needs to find that extra gear and kick things up one more notch. Breaking Bad and Better Call Saul both excel at building tension season upon season, leading to a grand crescendo of drama and mayhem. Although the spinoff might’ve started a little lower down on that scale, the final season is perfectly primed to stomp down firmly on the metaphorical gas. Lalo Salamanca is on the warpath, Kim Wexler is more reckless than ever, and Jimmy is fully immersed with the cartel. As long as Better Call Saul continues on its current course, fans should have no worries here.

Connecting The Dots To Breaking Bad

Compared to its successor, Breaking Bad had a massive advantage – the only plot threads in need of resolution were its own. The curse of the prequel dictates that Better Call Saul must not only tidy its own mess, but also lead neatly into the Breaking Bad era, ensuring everything adds up ahead of Walter White’s first foray into the meth game. On one side, Better Call Saul must resolve the fates of Kim and Nacho, force Jimmy to confront Chuck’s death, and play out the plot to ruin Howard Hamlin. In order for the two shows to coexist, the final season must then explain the whereabouts of Lalo Salamanca (and Jimmy’s line in Breaking Bad season 2), address Mike’s loyalty to Gus, and wring out the last of Jimmy’s decaying morality.

Better Call Saul has impressed with its knack of enhancing Breaking Bad while avoiding any glaring contradictions or inconsistencies. Many prequels fall victim to the trap of retconning established continuity in the name of telling more interesting storylines in the here and now, but Better Call Saul delicately treads a fine line, keeping the overall timeline surprisingly tight (if not absolutely foolproof – see Chuck and Jimmy’s ages). When Better Call Saul season 6 gets busy tying up loose ends and connecting to Breaking Bad, any dangling threads or narrative gaps will undermine the entire operation.

Better Call Saul season 6’s most important episode may be the finale, but there’s a very close contender for second place. When fans discuss the standout episodes of Breaking Bad, “Ozymandias” is often touted as the best Vince Gilligan’s magnum opus has to offer, currently boasting a perfect 10/10 score on IMDB. As well as featuring one of the show’s most dramatic death scenes (arguably the most dramatic), “Ozymandias” marks the moment hell breaks loose ahead of Breaking Bad‘s finale. This landmark episode is where the fuse of five entire seasons ignites.

As much as Better Call Saul might have its own style and approach, season 6 would be far weaker without an explosive episode in the “Ozymandias” mold. With the fate of Kim Wexler hanging in the balance and the ongoing war between Lalo and Gus heading for its inevitably bloody climax, there’s plenty of gunpowder in the Better Call Saul barrel. Rather than packing everything into one over-sized finale, the spin-off should once again look toward its parent series for advice, delivering a third-act episode that leaves viewers open-mouthed and excited for the ending.

One of Better Call Saul season 6’s most important elements will undoubtedly be the Gene timeline. Thanks to Breaking Bad, viewers already have a clear idea of where Saul will end up in his prequel story – he becomes a lawyer, Kim disappears, Gus wins, the whole meth-y operation continues. Set after Breaking Bad, the Gene timeline is where Better Call Saul can enjoy some freedom, and the final season should make the most of this. Until now, Jimmy’s secret life as Gene Takavic has played out in small, black and white increments, and it’s impossible to tell which direction this side of the narrative will swing. Will Jimmy die, as El Camino hinted, or will he be added to the small list of characters afforded a hopeful ending?

With so much still to cover in Gene’s world, Better Call Saul surely needs to spend more time there in its final season. Jimmy’s post-Breaking Bad future has been told predominantly through each year’s premiere, but that tradition needs to go in season 6. Not only is there too much story to fit into a single “Gene scene,” but revealing the ultimate fate of Jimmy McGill in the opening of Better Call Saul season 6 makes little sense. By bringing the Gene timeline firmly into focus, Better Call Saul can take a huge stride toward the impossible – bettering Breaking Bad.

More: Better Call Saul: Why Jimmy Is Working In A Cinnabon (As Gene)

WandaVision: Why Billy Could Hear Vision But Not Wanda
Related Topics

Craig first began contributing to Screen Rant in 2016, several years after graduating college, and has been ranting ever since, mostly to himself in a darkened room. Having previously written for various sports and music outlets, Craig’s interest soon turned to TV and film, where a steady upbringing of science fiction and comic books finally came into its own.
Craig has previously been published on sites such as Den of Geek, and after many coffee-drenched hours hunched over a laptop, part-time evening work eventually turned into a full-time career covering everything from the zombie apocalypse to the Starship Enterprise via the TARDIS.

Since joining the Screen Rant fold, Craig has been involved in breaking news stories and mildly controversial ranking lists, but now works predominantly as a features writer.
Jim Carrey is Craig’s top acting pick and favorite topics include superheroes, anime and the unrecognized genius of the High School Musical trilogy.