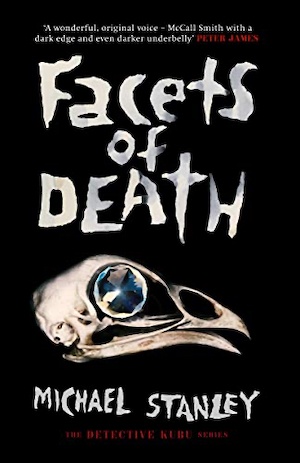 Have you met Detective David ‘Kubu’ Bhengu? You haven’t? Well, you are in luck, because Michael Sears and Stanley Trollip decided to write a prequel to their six-novel series featuring Kubu and Facets of Death is exactly where his story starts.

The first thing you need to know about the inimitable Detective Kubu is the origin of his name. Kubu is Setswana for hippopotamus and even though it’s an accurate indication of his size and appetite, Kubu is neither as dangerous nor as aggressive as his animal counterpart. Nevertheless, his persistence and thorough investigative skills should not be underestimated – a fact the slew of criminals he lands behind bars can attest to.

Readers will certainly draw parallels with Alexander McCall Smith’s No1 Ladies’ Detective series since both are set in Botswana. However, despite its amicable main character, Facets of Death isn’t cosy crime fiction. It’s serious, socio-political topics, violence and dense, complicated plot veer towards noir and don’t always make for a light and easy read.

Facets of Death is set in the late 1990s, with bright-eyed and bushy-tailed Detective Kubu fresh out of university. By impressing the right people he’s taken a shortcut directly to a detective position at Botswana CID – much to the irritation of his colleagues, in particular Detective Sergeant Matthew Neo. Luckily he’s a likeable guy, and with a little effort Kubu cracks even the toughest nut.

In two shakes of a lamb’s tail, Kubu’s youthful enthusiasm, inquisitive nature and spot-on observations come to the attention of his boss, Assistant Superintendent Mabaku, and the case he is initially assigned to – the disappearance of luggage at the airport – takes a back seat to a crime that’s considerably more exciting.

A Cessna aeroplane due to transport a large consignment of diamonds catches fire during take-off. It belongs to Debswana, a partnership between the De Beers mining company and the Botswana government and its engine explodes, injuring the pilot. Under pressure and behind schedule, the mine’s manager Major David Chamberlain and head of security Eddie Tau hastily approve an emergency backup plan. The diamonds are to be transported in armoured vehicles by a cash-in-transit company. The plan goes off the rails when the three vehicles – two carrying crates of stone chips, another with 100,000 carats of diamonds – are intercepted. The truck with the diamonds is stolen, and three security guards killed.

Staff at neither the mining nor the security company knew which vehicle had the diamonds. So how did the criminals know? Clearly it must be an inside job. But when one of the main suspects dies under suspicious circumstances, the sharp-eyed detectives have to revisit their initial theory. Their search leads them from the director of CID to a witch doctor, while the mastermind behind the heist is methodically eliminating any witnesses. Kubu might be as big as a hippopotamus, but he’s as smart as a fox – and not even a witch doctor can throw him off the track of a criminal.

Meanwhile, Kubu still has to find time to woo the beautiful Joy Serome, a woman working at the police records department and someone who we will see more of in the rest of the series. Part of the charm of the Kubu character is his childlike naivety. He has his feet planted firmly on the ground, a close relationship with his parents, is content with his second-hand Land Rover and frequently sings along to opera whilst driving it. Not exactly a tortured, alcoholic detective with relationship issues.

Balancing against Kubu’s cheerful character is a plot with darker elements – witchcraft, corruption and of course, multiple murders – and a cast of unsavoury characters. References to traditional practices and beliefs will appeal to adventurous readers looking for something new and unfamiliar. The occasional use of Setswana and Afrikaans words adds flavour, but doesn’t distract from the plot. The meaning of most of these words is easy to deduce, but if it gets too complicated, there’s a glossary at the back where you can also pick up a few handy words for your next trip to South Africa. Similarly, readers might find it difficult to keep track of the large number of characters – more so because their names will be unfamiliar to the non-African ear – however, there is list with pronunciations to refer to at the start of the book.

If you enjoy an intricate plot with a varied cast of characters, in an exotic setting, with a pinch of social and political spice, Facets of Death is a good place to start. Then you can immediately continue on to the remaining six books in the Detective Kubu series.

Also see Three Bodies by NR Brodie and Reconciliation for the Dead by Paul Hardisty.