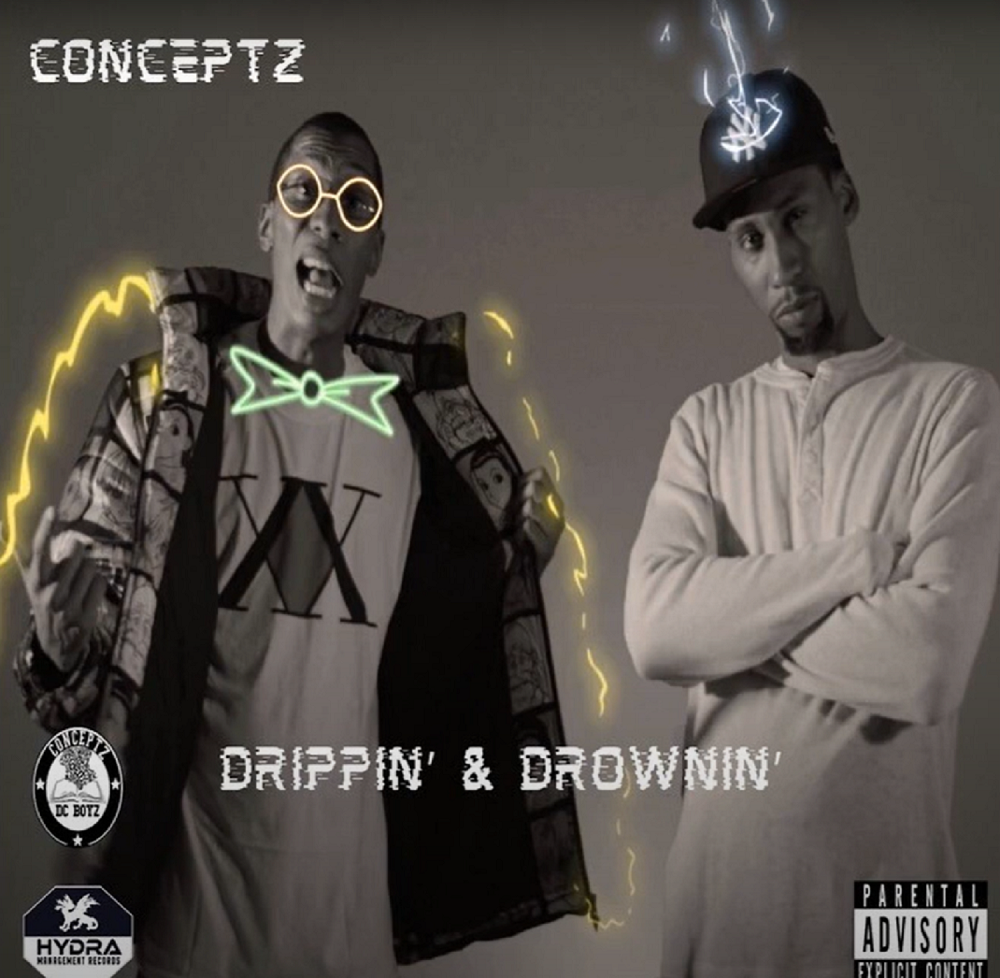 Conceptz have seemingly captured lightning in a bottle, once again, on their new single, “Drippin And Drownin.” Though the song is slightly out of the box, it is incredibly well arranged, and MC, HighRowGlyphFix, once again delivers a stellar performance. Conceptz make cerebral Hip Hop, that is cleverly formatted to showcase the exceptional skills of both its members. To this point, it seems as though their message is a blender full of thoughts and statements, that amount to a well presented variety article.

Conceptz is a group based out of Orange County, but not the one you’re thinking of. Funny enough, there is an OC in NY, and these brothers are putting it on the map. That’s right, Conceptz is a brother duo. One of them, performs, and one of them creates. Much like Erik B and Rakim, their work is conscientious, with occasional doses of self-congratulatory passages.

Forming in 2012, the pair has released several singles, but to date, not an official album. Their work has been featured on BET and MTV, and they have collaborated with names like Wiz Khalifa and Gucci Mane. Though their progress has been steady and much is owed to their sterling creativity and quality of work, they do seem to have enjoyed a stroke from the magical brush of luck. Luck will only get you so far though, and these two have certainly taken care of the rest. On their new single, they take a slightly different approach, and the results are once again, exceptional.

“Drippin And Drownin” is a pulsating, almost slinky piece, but in a German Cinematic way. Actually, the low vibrational foundation of the song, is similar to the music Gasper Noe used in the highly controversial French film, Irreversible. It’s said that the music was specifically used to create panic and anxiety for the audience. Conceptz new single is most likely not designed to induce panic or trauma, but it does give you a slightly uneasy feeling, as it almost effortlessly hypnotizes you. HighRowGlyphFix Eminem like cadence over the top of the score, gives this a juxtaposed quality that most couldn’t dream up.

I’m Drippin/they drownin/the kicks is sick/I’m drippin and dowsin. As previously touched upon, a great deal of Conceptz’ lyrical content is centered around boasting. It’s evident of youth and posturing, and I believe they will eventually move past it, as they are capable of more. Nevertheless, it doesn’t reduce the enjoyment of the piece, as on the contrary, it can be quite moving in a competitive sense. There is so much to take in with Conceptz , that an occasionally blunt decree is refreshing.

Conceptz seem one breakout hit away from stardom. It could be one of their existing tracks, such as “Drippin And Drownin,” or it could be something yet to be penned. Regardless, the body of work they are putting together, now, is an integral part of their long term identity. With each ensuing single, they outdo the previous effort, in terms of sheer inspiration and focus. It’s only a matter of time before the drip becomes a trickle effect to greatness.