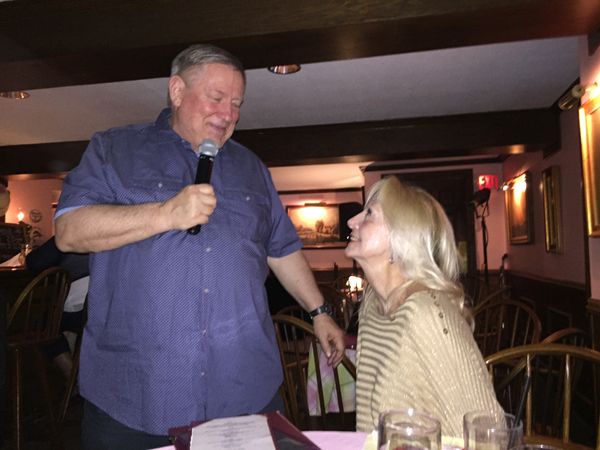 Ladies and gentlemen, Mac is back! Hughie Mac, known for his comprehensive albums of familiar standards, classics, and hits all titled some variant of “Sings Some Great Songs,” returns to the frontlines of classy music covers with his fourth stab at the concept. Standing tall at a whopping seventy-minute runtime, Hughie Mac Sings Some Great Songs, Pt. 4 contains a total of twenty-three tracks ranging from Sinatra homages via lounge singing, to comfy Jimmy Buffett and Zac Brown Band vacation rock. It’s all there for the taking, and Hughie Mac isn’t shy with his approach.

Based just outside of Philadelphia, PA, Mac is considered a very in-demand act, frequently performing at bars, restaurants, private parties, and senior centers. With such a wide array of hit songs at his fingertips, it’s easy to see why a singer like Hughie Mac has no trouble finding places to showcase his art: Mac is clearly in love with what he’s doing, and has taken the last five years to polish his form and continues to come out swinging. Most could see a concept growing worn and tired after the third attempt but Hughie Mac isn’t afraid to quote the old mantra, “if it ain’t broke, don’t fix it,” as he arrives on the scene with his fourth iteration. The aesthetic brought to the album covers across projects keeps this core thought by holding the same classic pose and picture.

Hughie Mac Sings Some Great Songs, Pt. 4 opens with Mac’s spin on “Almost Like Being in Love,” a familiar tune tackled by countless musicians, most notably perhaps Nat King Cole and Gene Kelly. Following this, Hughie veers towards Johnny Mathis with a cover of “The Twelfth of Never.” Cover albums can be a dime a dozen, with the artistry hinging completely on the approach of the singer helming the track, which brings up a minor complaint: throughout twenty-three songs, Hughie Mac doesn’t offer any new perspectives on the material he’s showcasing. This can be fine and works out overall as the album is so evidently a passion project, but the audience might tune out when dealing with a runtime that exceeds seventy minutes. Then again, it’s safe to say that the audience tuning in for a cover album knows what to expect and Hughie Mac comes offering a wide variety of music for a wide variety of moods, ultimately not intended for consumption in one sitting.

Length and auteurism aside, listeners will generally be pleased with Hughie Mac’s fourth outing in this particular series. Mac also has a Christmas album under his belt, as well as an album of classic Irish standards worth giving a shot, and according to his website, plans for upcoming live shows seem like a distinct possibility, which will only help elevate the album more. It’s extremely evident that an act like Hughie Mac knows his audience and his niche better than anyone, and he’ll only continue to further enjoy polishing it for himself first and foremost. I’m certainly looking forward to seeing Hughie Mac sing some more great songs in volume five!