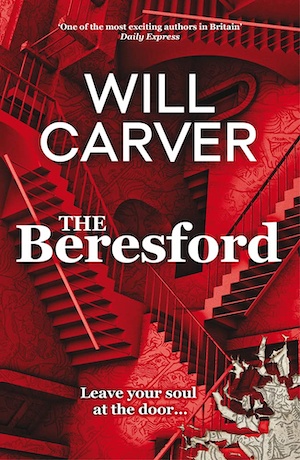 Will Carver’s literary thriller has more than a dollop of devilish doings. The author’s last few novels such as Good Samaritans, Nothing Important Happened Today and Hinton Hollow Death Trip have loosely or more closely focused on the work of his darkly troubled police detective DS Pace, but here Carver cuts a new furrow with a standalone that explores slightly different themes. He’s certainly an author to look to for innovation, alongside a very dry sense of humour.

The Beresford is a grand old pile at the edge of an unnamed city. The bottom two floors contain the landlady’s quarters, the library and four furnished flats. The building’s third floor is empty and used for banquets, with perhaps eight floors of apartments above that. Along with a creaky elevator of antique design, these latter spaces are accessed by a side door, well away from the attentions of the residents of the first two floors, who are the centre of the tale. Their flats are spacious, airy and cheap, and the landlady, Mrs May, has no difficulty keeping them filled. In fact, from the time a tenant permanently departs, no more than 60 seconds expire before a replacement rings the front bell.

When the story opens, Mrs May has two tenants in residence and a third arriving momentarily. One of the residents is the insufferably pretentious conceptual artist Sythe, né Aidan Gallagher, desperate to escape his Irish farm-boy roots and even more desperate to become a famous painter. He makes heavy use of Mrs May’s immaculate back garden and its burning bin, where he destroys piles of disappointing artworks.

A longer-term tenant is Abe Schwartz, whom the narrator introduces by saying, ‘Your daughter brings home Abe Schwartz and you’re pleased. Not for her.’ He’s polite, normal, nice. So of course Abe interrupts the important task he’s engaged in to help the new tenant, Blair Conroy, shuttle her boxes up the Beresford’s imposing staircase. Blair hopes for a new start at the Beresford, away from the suffocating religiosity of her small town and, especially, her parents.

After a week or so, she notices that although she’s heard a lot about Sythe she hasn’t met him. Nor will she, as Abe has murdered him. When she arrived that first day, he was busy figuring out how to dispose of the body.

Despite the grim situation, Carver’s deft touch maintains an upbeat tone. The romance that blossoms between Abe and Blair offers hope for redemption, until he kills her too. Now he’s something of an expert in dismembering a corpse and disposing of the remains. Meanwhile, the oblivious Mrs May keeps her rigid schedule, which involves numerous glasses of wine during the day, violent prayer and an afternoon siesta.

Around this time you may hear a bizarre echo of the song Hotel California: ‘You can check out any time you like, but you can never leave.’ At least not in one piece. Carver’s device of introducing new characters as one by one tenants are dispatched keeps the story moving along briskly. New people to meet, some whose tenancy will, you can predict, be rather short. They’re all initially charmed by the building and their dotty new landlady, which conjures up another line from the same song: ‘This could be Heaven or this could be Hell…’ and leaning distinctly toward the latter.

When newcomer Gail arrives, replacing Blair, she upends the uneasy equilibrium. She’s escaped an abusive husband, and she and Abe incinerate her cell phone (a literal burner phone) to stop his offensive texts. Complicating matters, Gail is unexpectedly pregnant.

Carver leads off his novel with an epigram credited to Charles Bukowski: “Some people never go crazy. What truly horrible lives they must live.” This may lead you to wonder about the extent of crazy at work at the Beresford. Being overcome by madness is referred to several times, even when Abe muses about his affection for the late Blair. For the most part, he thinks, love is interchangeable with madness, but nobody would ask to be mad. As Gail obsesses on the future of her unborn child, she too is increasingly unhinged.

How much does ancient Mrs May know? Or suspect? You’ll start to wonder that during the awkward dinners she hosts for new arrivals. She challenges her guests with Faustian questions like, ‘What do you most want in the world?’ and its dangerous corollary, ‘What would you do to get it?’

This is an entertaining book, full of surprises. Odd as this may sound, it’s fun. Carver’s smooth writing style and the hothouse environment he’s created prevent you from being troubled by certain logistical details. At the end, don’t be surprised if you recall a third Hotel California lyric, ‘They just can’t kill the Beast.’

We interviewed Will Carver back in 2012.