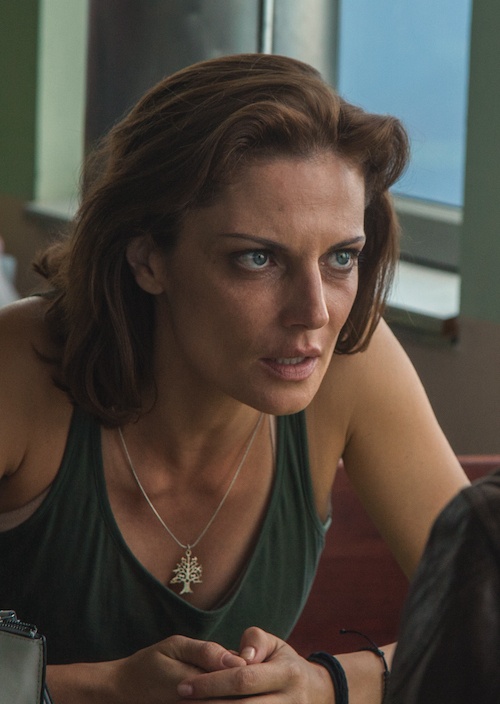 COVID-19 has limited travel options for just about everyone except Barnard Castle tourists, but one thing we have been able to do is travel the world via subtitled crime shows. It’s something readers of Crime Fiction Lover have been doing since long before the pandemic. Sweden, Germany and France have been big destinations but we’ve also been to Mexico, Brazil and Australia. One country that’s new on the itinerary is Bulgaria. Here at CFL we haven’t come across many books set in Bulgaria, let alone TV series. That’s just changed, thanks to Walter Presents, the Channel 4 streaming service which last week launched The Devil’s Throat.

This 12-part procedural is fast-moving and complex, but the first thing you’ll feast your eyes on is the glorious setting. The backdrop here is the Rhodope Mountains, with their pine forests and rugged cliff faces. The second thing you’ll see is a lot less glorious – the bloated, naked corpse of a 65-year-old man floating in a lake. Like all good crime shows, The Devil’s Throat starts off with a victim, and attending the scene is Kommissar Philip Chanov (Vladimir Karamazov, above) of the Smolyan police, along with his team.

This is a strange murder. There are no traces of a struggle around the lake, so he wasn’t killed or even carried there. It seems the victim was dropped from above. But access by plane or helicopter is difficult due to the mountains and trees. The victim has been stabbed and his eyeballs have been removed and then, it seems, put back in their sockets. He’s also been circumcised post mortem. He is identified as Petar Karakehayov, a retired border policeman.

While Chanov deals with the postmortem, young detectives Donka (Lydia Idjova) and Asen (Hristo Petkov) are dispatched to inform the family. Heavily pregnant, Donka adopts the unusual tactic of accusing the dead man’s son of incest with his mother – which is almost as shocking as the state of the corpse. But her stir-it-up approach yields results and she discovers that the victim had run off with his mistress. Potential motives begin to surface.

Meanwhile, a journalist starts sniffing around the case. Using similarly audacious tactics, Mia Nedelcheva infiltrates the crime scene and soon afterwards gains access to the body by claiming to be a family member there to identify the victim. She vomits on the coroner so that he has to go and change, then starts doing her own forensics on the body. Maybe she’s more than just a journalist? She has already intimidated a young Iraqi man into divulging the name of the region’s new smuggling kingpin – Petar Karakehayov.

Although details of the case are introduced quickly and abruptly, and some of the characters adopt unlikely and often unbelievable tactics, The Devil’s Throat is deeper than it appears. The ritual nature of the killing, followed by a visit from a Muslim mystic who fears that an evil has been awoken by the lake, gives it creepy and dangerous atmosphere. Fear is one of the themes of the programme, which becomes clearer when the investigation veers towards a Syrian refugee. Apparently he was smuggled into the country by Karakehayov’s network, but now he is the number one suspect. The subjects of immigration and xenophobia add new dimensions to the plot.

Then there are Kommissar Chanov’s personal demons. He might be the lead detective in Smolyan, but his bossy and overbearing father is the head prosecutor. Dimitar Chanov (Vasil Banov) is more than happy to pin the murder on the refugee, even though his son knows that there is a lot more to the case. When a shelter for migrants is set on fire, tension escalates and the pressure on Chanov increases. Mia Nedelcheva turns out to be a national security agent investigating people trafficking, but it seems even she can’t help Chanov clear the way to justice with his father trying to pull the strings.

If you’re in the UK, you can stream The Devil’s Throat on Walter Presents on Channel 4. In the US it is available through PBS Masterpiece. It consists of 12 45-minute episodes and originally aired as Djavolskoto Garlo in Bulgaria in 2019.