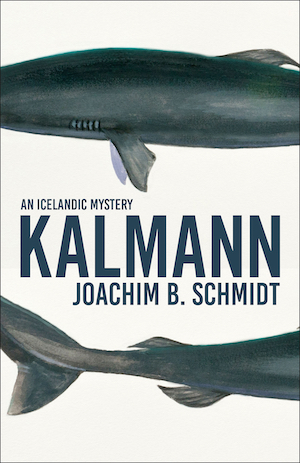 Translated by Jamie Lee Searle — In Kalmann, the Swiss-born journalist and author Joachim B Schmidt brings us the story of a local man’s disappearance from the remote village of Rauferhöfn in northeast Iceland. However, this isn’t your typical gloomy Nordic noir crime mystery. Schmidt’s take on a small community and its inhabitants is refreshingly unorthodox and quirky, despite its sombre and serious plot.

Hotel owner Róbert McKenzie’s disappearance and the events that follow are from through the perspective of Kalmann Ódinsson. Kalmann isn’t the narrator we’re used to in crime fiction. He isn’t a detective or private investigator. He’s not a journalist or part of an intelligence unit. In fact, Kalmann is different from most other adults. At 33 he has the mental ability of a six-year-old. He was told that the wheels in his head ran backwards and, according to him, sometimes his brain just switches off, which can lead to bouts of anger and losing control.

Our first introduction to Kalmann is when he is stumbling across the Melrakkaslétta plain, hungry, exhausted, confused and smeared in blood. He has been hunting Schwarzkopf, the elusive blue fox, up at the Arctic Henge monument when he finds a pool of blood in the snow. Kalmann follows the blood trail, but there is no body in sight. He doesn’t want to get involved and decides to keep quiet about his gruesome discovery.

The disappearance of a man of Robert McKenzie’s stature doesn’t go unnoticed for long and when the police are called in to investigate, Kalmann has no choice but to show Detective Birna, all the way from Reykjavik, where he saw the blood. Proudly wearing his cowboy hat, sheriff’s badge and Mauser pistol he looks like the Sheriff of Raufarhöfn and acts the part even though he is frequently ridiculed for doing so. He wears these items with pride because it’s the only connection he has to his estranged American father who was briefly at the US military base outside Reykjavik.

Even though Kalmann’s brain is wired differently there are a few things he’s very good at. Hunting the Greenland shark is one of them, hence the book’s unusual cover. However, it’s been getting more difficult to find them due to the increasing water temperature and he often returns to shore empty-handed. When he does catch one he uses his family’s secret recipe to make hákarl, the fermented fish Iceland is known for. He’s proud that his his hákarl is almost as good as his grandfather’s and regularly takes some to him in the retirement home, even though his grandfather doesn’t recognise him any more.

Kalmann’s relationship with his hunter-fisherman grandfather is the most important part of his life. He was Kalmann’s only male role model growing up and the person who taught him to trust his gut when he was unsure of what’s right or wrong. He also instilled in Kalmann a love and respect for the sea. He tries to visit his grandfather as often as he can get a lift from the talkative Magga. That is, until Magga, who was once involved with Róbert McKenzie and pregnant with his child, unexpectedly dies.

Through the portrayal of Kalmann’s life and his observations of the town’s people, critical information is gradually revealed. For example: Róbert McKenzie planned to take the last fish quota to Dalvik which would lead to the only remaining income generated in town disappearing. Rauferhöfn thrived during the herring boom, but stocks were depleted and the fisherman had to broaden their search until there was almost nothing left. Could McKenzie’s plans have been enough reason to kill him?

Or, was he mauled by a stray and hungry polar bear swimming all the way from Greenland as Kalmann wants everyone to believe?

Occasionally you might forget that this is a crime fiction novel. Schmidt so cleverly builds up his characters that they are often more interesting than the disappearance that’s being investigated. It’s also an extremely handy diversion technique. Likewise, Schmidt’s descriptions of the landscape and the animals inhabiting it are vivid and even interesting. These details are something native Icelandic crime writers might not necessarily consider as interesting for readers outside the country. Perhaps a Swiss author who has been living in Iceland for the past 13 years brings a fresh outlook?

The use of a narrator that’s naive, yet astutely observant, and a slow developing plot results in a pleasantly unique, less dark and gloomy and mainly character-driven novel which is unlike any Nordic noir you’ve read before. Moving, intriguing and different, Kalmann is recommended reading.

This novel is reminiscent of The Curious Incident of the Dog in the Night-time and Elizabeth is Missing. For cold climate quirky also see Cold Storage, Alaska or Little Siberia.

‘Elvis’ Shakes, Rattles & Rolls To $31M+ In Fierce Dance-Off At Box Office With ‘Top Gun: Maverick’
Summer House Star Paige DeSorbo Shares Her Packing Hacks and Travel Essentials
The House Across the Lake
Book Riot’s Deals of the Day for June 23, 2022
After Buying His Mom A House, The Rock Purchased One For His Cousin, And There’s Heartwarming Footage