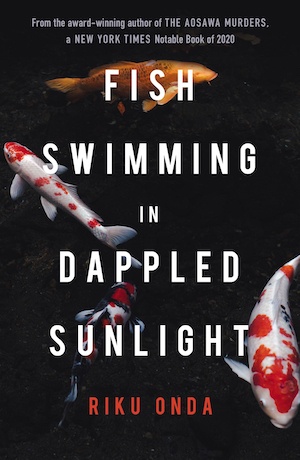 Translated by Alison Watts — If you enjoyed Riku Onda’s previous mystery translated into English, The Aosawa Murders, you’ll find many of the same attributes in her new psychological thriller, Fish Swimming in Dappled Sunlight. It offers that same dreamy feeling and a quality of uncertainty about the characters’ perceptions. It’s almost as if the story were told by those very fish, trying to make sense of the light and dark around them through a veil of water.

The short chapters of this new book are related alternately by Chiaki (Aki) and Chihiro (Hiro), who met in the tennis club at college and were immediately attracted to each other. Paired up to play doubles, it was almost as if they had played together their whole lives. In fact, when their parents learn about their friendship, they reveal that the young people are in fact brother and sister – twins separated when their mother could no longer take care of them both.

Daughter Aki was adopted by a couple when the children were three. They were raised as only children.

To recapture the lost years of siblinghood, Aki and Hiro decide to share a flat in Tokyo and are very happy for a time. The relationship falls apart after a mountain hike when their guide is killed in a fall and each is wracked by suspicion that the other somehow engineered the tragedy.

The novel takes place on their last night together. The furniture is gone. Everything is packed and ready to send on. The next day the workmen are coming to turn off the utilities. They are eating a last meal, using a suitcase laid on the floor as their table. Hiro plans to move in with a girlfriend. Aki says she’s going to Vietnam with a friend, but she isn’t. The two characters in the empty apartment, the suitcase, the bare light bulb above them – it’s an intense confrontation.

Every chapter peels away another layer and before long you learn that each of them is intent on extracting a confession about the guide’s death from the other. It turns out that the guide is connected to the siblings, in a way that might provide a motive for murder. But is that really the case?

Aki is worried that Hiro might even kill her, too, and pockets his knife. Author Onda spreads out the revelations about the circumstances of the death. In large part, they’re the siblings’ differing impressions of the tragedy, rather than forensic evidence. Meanwhile, Aki and Hiro are looking inside themselves for revelations of their own. Unexpected fragments of memory find their places in the puzzle of their lives, as the mystery flashes, twists and turns much like the eponymous fish that Aki at one point describes.

The translation by Alison Watts effectively conveys this sense of gradual discovery – about the guide, about the siblings’ relationship, about their un-twin-like misinterpretations of the other’s state of mind, about the past and perhaps even about their futures. Onda has a lovely, slow-moving and relatively unadorned style of writing. But beneath the placid surface is a tidal wave of emotion. She minimises physical description in lieu of emotional nuance, resulting in a complex and memorable story.

Riku Onda is a well-known Japanese novelist, whose works have won numerous top awards and been adapted for both film and television there. Her 2020 novel, The Aosawa Murders, was the first to be translated into English. It won a Best Novel Award from the Mystery Writers of Japan and was selected as a 2020 Notable Book by The New York Times.

For more, see our list of top Japanese crime fiction.