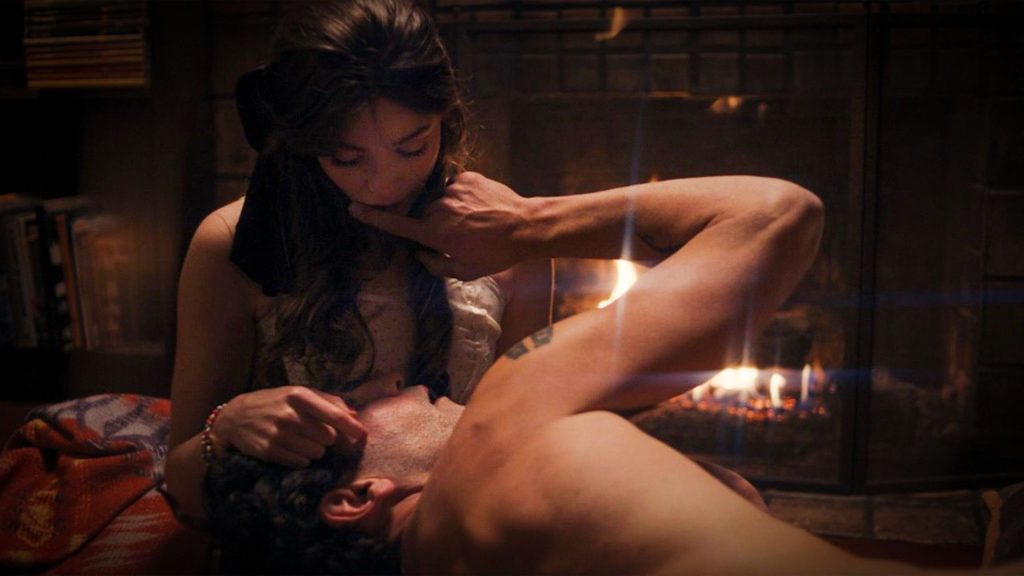 Lena Dunham is back. Sharp Stick — the writer-director-actor’s follow-up to the HBO series Girls and her first film since Tiny Furniture (2010) – opens in LA at Landmark’s renovated single-screen NuArt Theatre and at the Quad Cinema in NYC. It expands to 40-50 screens next weekend, heading to about 100 thereafter — a mix of AMC, Alamo, Laemmle and Harkins circuits and top U.S. arthouses.

Presales have been strong, said Utopia’s marketing and distribution VP Kyle Greenberg. A handful of showings with Dunham Q&As are sold out, natch. The film, which Utopia acquired out of Sundance, releases August 16 on PVOD. Deadline review here.

Sarah Jo (Froseth) is a sensitive and naive 26-year-old living on the fringes of Hollywood with her disillusioned mother (Leigh) and influencer sister (Paige). Working as a caregiver and just longing to be seen, she begins an exploratory affair with her older, married employer (Bernthal).

No surprise, Girls fans, there’s quite some sex. Greenberg said marketing required a “quick and agile social campaign” in the face of what he called “surprising” and “increasingly puritanical policy standards across a number of key social advertising platforms” — Facebook, Instagram, Twitter — as algorithms flagged marketing materials. “It’s no secret that Utopia has played with risky material. We are happy with that.” he said. In The Scary of Sixty-First, for example, two roommates are haunted by the spirit of Jeffrey Epstein after unwittingly moving to a Manhattan apartment he once owned. Sharp Stick’s social campaign targets mainly younger millennial and older Gen Z and owes a lot to “the supremely enthusiastic cast and their robust collective social media presence.”

Elsewhere in specialty, Bleecker Street presents A Love Song in four theaters in NY and LA, expanding thereafter. The Sundance and Tribeca Festival selection, written and directed by Max Walker-Silverman, stars Dale Dickey and Wes Studi. Dickey is Faye, a lone traveler biding her time fishing, birding and stargazing in a rural Colorado campground as she awaits the arrival of Lito (Studi), a figure from her past who is navigating his own tentative and nomadic journey across the rugged West. Deadline review here.

IFC Films presents Resurrection at 60 theaters. On digital August 5. Another Sundance official selection, written and directed by Andrew Semans and starring Rebecca Hall (Passing), Tim Roth (Sundown, Bergman Island), Grace Kaufman, Michael Esper, Angela Wong Carbone. Hall is Margaret, leading a successful and orderly life, perfectly balancing the demands of her busy career and being a single parent to her fiercely independent daughter, Abbie. It’s all upended when an unwelcome shadow from her past (Roth) returns. Battling her rising fear, Margaret must confront the monster she’s evaded for two decades who has come to conclude their unfinished business. Deadline review here.

United Artists Releasing presents Ron Howard’s Thirteen Lives for a weeklong qualifying theatrical run ahead of its Amazon Prime release August 5. With Colin Farrell, Joel Edgerton, Viggo Mortensen, Tom Bateman. Written by William Nicholson. The incredible true story of the tremendous global effort to rescue a Thai boys soccer team trapped in the Tham Luang cave during an unexpected rainstorm. A team of the world’s most skilled and experienced divers join with Thai forces and more than 10,000 volunteers to attempt a harrowing rescue of the twelve boys and their coach with the entire world watching. Deadline review here.

Lionsgate presents thriller Paradise Highway with Frank Grillo, Juliette Binoche, Morgan Freeman. Written and directed by Anna Gutto, Sally (Binoche), a truck driver, has been forced to smuggle illicit cargo to save her brother Dennis (Grillo) from a deadly prison gang. With FBI operative Gerick (Freeman) hot on her trail, Sally’s motivations and conscience are challenged when the final package turns out to be a teenage girl (Hala Finley).

EXPANDING: A24’s indie juggernaut Everything Everywhere All At Once by Daniel Kwan and Daniel Scheinert – in theaters since April — is jumping back up to around 1,500 screens (from 170). The Daniels also promised on Twitter that the kinetic Michelle Yeoh-starrer will feature “some good old fashioned bloopers and outtakes like a classic Hong Kong flick” in the credits.