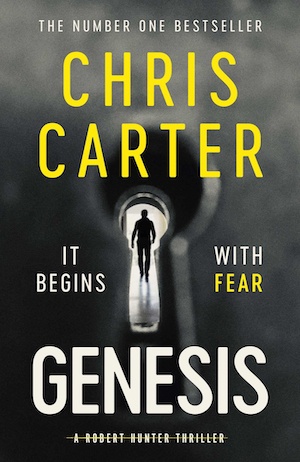 The American author Chris Carter and his serial killer catcher Robert Hunter return this week to head up our new crime books column. As you’ll know if you’ve read a book in this series, the blood drips from the pages when Chris Carter writes and his fans love it.

Cosy crime lovers should perhaps move right along, because Chris Carter’s blood infused thrillers are definitely not for you. Carter fans, however, will be delighted to hear that Robert Hunter is back on 18 August, when Genesis is released. Once more there’s a devilish killer on the loose and his twisted MO that makes no rhyme or reason as sinister poems are found inside the corpses of seemingly unconnected murder victims. Time for Hunter to do what he does best, shine a light into the darkest recesses of the mind of a killer who thrives on fear and to whom death is a lesson that needs to be taught.
Order now on Amazon or Bookshop.org

All the Broken Girls by Linda Hurtado Bond

A crime reporter whose mother was murdered a decade ago is at the heart of All The Broken Girls, written by award-winning journalist Linda Hurtado Bond and out on 23 August. Mari Alvarez is following up a story when something sets her senses tingling. A  woman has been gunned down on the doorstep of her West Tampa neighbourhood, and Mari feels an inexplicable connection to her. It’s the second murder in two days and to Mari it feels like the killer is trying to send her a message – is she onto something, or deranged?
Order now on Amazon or Bookshop.org

A Perfect Family by Sarah Sheridan

Ellen is 19 and she’s met the man of her dreams. Jack Bryant is a brilliant best friend and roommate and Ellen knows he is the ideal boyfriend with an incredible family – they’re so perfect, so wealthy, so envied by the neighbours. Then, one terrible Saturday morning, Ellen and Jack visit his family home and find six hanging bodies. As Ellen begins to chip away at the dazzling facade, she is shocked by what she discovers – but is Jack telling her the whole truth? Find out when psychological thriller A Perfect Family by Sarah Sheridan comes out on 22 August.
Order now on Amazon

The Family Retreat by Bev Thomas

An idyllic little cottage, sea air, sun-soaked days on the beach… the perfect family holiday, right? Actually, no – as Jess is about to find out in The Family Retreat, Welsh author Bev Thomas‘s tasty slice of domestic noir that’s out on 16 August. Rob has booked the break and wife Jess is looking forward to some family time, peace and quiet, relaxation, lazy meals and plenty of wine, but all that changes when she unearths a secret. Never mind, it’s a problem she’s sure she can help solve. But things are not always as they seem and as autumn approaches, she’s about to realise this is going to end in a way no-one could have imagined…
Order now on Amazon or Bookshop.org

There Are No Happy Loves by Sergio Olguín

Written by Sergio Olguín and translated by Miranda France, There are No Happy Loves is the latest in the acclaimed series featuring Buenos Aires journalist Veronica Rosenthal, out on 20 August. As the book opens, Veronica is being haunted by her past, but when a present day conundrum tempts her, she is soon immersed in an investigation. Darío was involved in a car accident that supposedly killed all his family, but he’s convinced that his wife survived and abducted their child. Meanwhile, the random check of a lorry reveals its cargo of human body parts. Is there a connection, and what is it that the political establishment and church are trying to cover up?
Order now on Amazon or Bookshop.org