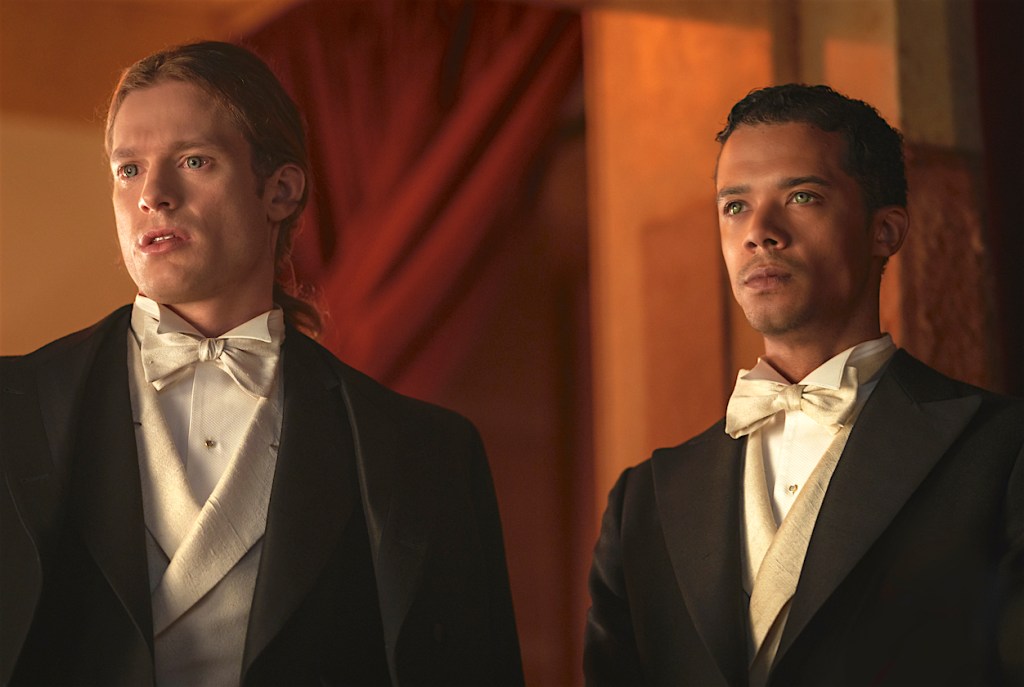 I’ll say one thing about AMC’s new take on Interview With the Vampire: It’s not subtle. But then again, no one is looking for a timid Anne Rice adaptation, are they? Rice’s bestselling Gothic vampire novels unabashedly revel in sex, blood and passion, and this Vampire series — premiering Sunday, Oct. 2 at 10/9c; I’ve seen the first three episodes — certainly delivers those things in spades. It’s grandly melodramatic and genuinely unsettling with a sumptuous visual style, but the melodrama does tip over into the absurd at times. Some will fall in love with this adaptation, I think… and some will just love to hate-watch it. 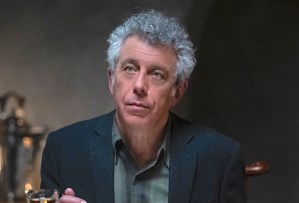 Fifty years after their first encounter, ageless vampire Louis, played by Game of Thrones‘ Jacob Anderson, tracks down jaded journalist Daniel Molloy to help him tell his life story. (This is the rare TV show where the framing device is nearly as interesting as the main story, thanks to pointed references to current events and Eric Bogosian’s crabby, cerebral turn as Molloy.) Louis’ story, steeped in sex and violence, takes us back to the brothels and illegal gambling halls of 1910 New Orleans — and his status as a Black man in the South is absolutely a factor here, too. He meets Lestat (Sam Reid), a honey-voiced French charmer who takes Louis under his wing and guides him through the ways of being a bloodsucker, from proper feeding and sleeping rituals to the mystical art of reading minds.

Vampire‘s premiere weaves a seductive spell, going over the top in all the best ways with beautiful period costumes and production design that recall Boardwalk Empire and The Knick with a supernatural twist. The visual effects are top-notch, too, with cool touches like a vampire’s skin dissolving bit by bit in the sun and Lestat freezing time to speak telepathically with Louis. Writer Rolin Jones (Perry Mason, Friday Night Lights) and Emmy-winning director Alan Taylor (Game of Thrones, The Sopranos) bring serious prestige TV cred, and they make some bold storytelling choices. The novel’s homoerotic subtext becomes explicit text here, with Louis and Lestat locked in an intense infatuation. As they share a sensual three-way tryst with a prostitute, Lestat sinks his teeth into Louis’ neck — and the primal power of his bite sends them both floating into the air. 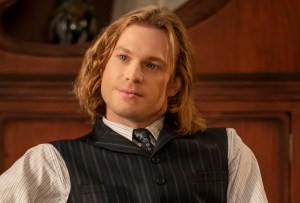 The initial thrill of being a vampire eventually wears off, though, giving way to more mundane concerns, and so too does this Interview With the Vampire. After that dazzling premiere, Louis’ story gets less interesting as it settles in, dragged down by his tedious family issues. Anderson does have serious fire and gravitas as Louis, making him a solid, sympathetic lead. But I’m a bit torn on Reid as Lestat: He has a hypnotic, otherworldly quality that’s sometimes mesmerizing… and other times ridiculous. (Note: The child vampire Claudia, played by Kirsten Dunst in the 1994 movie, doesn’t appear in the first three episodes, but casting an older teen in the role — Bailey Bass plays her here — does inevitably blunt some of the shock factor.)

As fun as it is to see Vampire go careening off the rails, it does get lost in its own indulgences at times, with overwrought screaming matches set to a blaring score that verge on camp. (This is a show where the question “Did you eat the baby?” is asked in earnest. And not just once!) It has a hint of Hannibal‘s wild bloodlust, but it’s not nearly as refined as that gory masterpiece was. Still, this Vampire manages to find moments of lyrical beauty amid all the excess. Louis advises Molloy at one point to “let the tale seduce you,” and for a while, this tale did indeed seduce me… but some spells can only hold us in a trance for so long.

THE TVLINE BOTTOM LINE: AMC’s beautiful new take on Interview With the Vampire is certainly bold and seductive, but it too often tips over into camp.