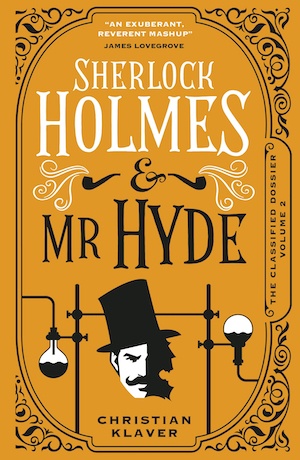 From marauding Martians to the Gentleman Ghost, Arsène Lupin to Fantômas, the Phantom of the Opera to the nefarious Professor Moriarty, Sherlock Holmes has faced some of literature’s greatest villains. Faced them and thwarted them. Yet, when faced with a real-life foe in Christian Klaver’s Sherlock Holmes & Mr Hyde, the detective finds that the stakes have never been higher, nor has the level of danger facing him, his closest confidants and the world at large.

It is arguable that no serial killer has ever captured the public’s attention to the same extent as Jack the Ripper, and that was just as true in the late 1800s as it is today. Back then, Sherlock Holmes had been unable to crack the case, not least because he and Professor Moriarty had taken their infamous tumble over the Reichenbach Falls in 1891, the same year that saw the last of the Ripper’s non-canonical killings, and that failure was one of Holmes’ greatest regrets.

He receives an unexpected and decidedly unwelcome opportunity to address that regret when news reaches Baker Street of the murder of Miss Eugenie ‘Genie’ Babington, a resident of Whitechapel. Genie’s throat was slit with a sharp blade, something similar to a doctor’s scalpel, and even though it has been 15 years since the Ripper’s last confirmed kill, that modus operandi and the fact that her kidney has been taken as an apparent souvenir are enough to convince the public and the press that Jack is back.

There is one major difference between the original series of killings and the most recent crime – this time a witness has identified the murderer: Mr Edward Hyde, a well-known and disreputable figure in Whitechapel. What’s more, it is Dr Henry Jekyll, a close acquaintance of Hyde, who has brought the matter to Holmes’ attention. Jekyll fears that the police are bound to arrest Hyde based on the witness identification and he wants to engage the consulting detective to clear Hyde’s name.

Now, while this second volume in author Christian Klaver’s The Classified Dossier series can certainly be read as a standalone novel, a number of important incidents that occurred in the Sherlock Holmes & Count Dracula prove integral to the plot and character motivation here. Principally, Holmes’ encounter with Count Dracula has upended his understanding of the world, forcing him to recognise that the supernatural exists and that there is not always a logical explanation for things.

So, he’s not overly surprised when Dr Jekyll transforms into Mr Hyde in the sitting room at Baker Street!

After hearing Hyde’s explanation of how he came to be standing over Genie’s dead body, Holmes agrees to take the case, leading to him and Dr Watson once again entering the dark underbelly of London. While solving the original Ripper killings proved fiendishly impossible, Holmes and Watson quickly discover the reappearance of the notorious killer is actually at the heart of something more complex and diabolical than even the earlier murders indicated.

With Sherlock Holmes & Mr Hyde, Klaver does an excellent job of recreating the London of 1903 as described in Arthur Conan Doyle’s original Holmes stories, not least because the novel is narrated by Watson is a style that is very much in keeping with Doyle’s own portrayal of the good doctor. Of course, Klaver’s Watson does differ significantly from Doyle’s in that he is a vampire, which helps merge the literary worlds of classic horror and classic crime.

Given that the science of deduction and analysis lies at the heart of Holmes’ investigative process, the inclusion of supernatural elements in stories featuring the great detective is always polarising (“This agency stands flat-footed upon the ground, and there it must remain … No ghosts need apply”), although if the apparent contradiction can be overlooked, such Holmes pastiches are often a whole lot of fun. Plus, in this case, Klaver takes pains to have both Holmes and Watson analyse and agonise over their newfound familiarity with the world of the paranormal.

Moreover, the fact that Jekyll turns into Hyde through some strange work of science and a peculiar potion fits in with Holmes’ own love of scientific experimentation and search for new knowledge. As such, it seems rather plausible to find Sherlock Holmes coexisting with Dr Jekyll and Mr Hyde. The scientific approach that Watson has taken to managing his vampirism also accords with Conan Doyle’s practice of having Holmes and Watson search for the logical aspects of even the most illogical situation.

Due to Sherlock Holmes & Mr Hyde being a mashup of the horror and crime genres, it’s no surprise that the central puzzle facing Holmes is a little different from the kind – however improbable – that he usually encounters. He still has to track down criminals and determine both their motives and their means, but he has to do so by thinking beyond what regular humans are capable of and accepting that the truth might lie somewhere between the unbelievable and the impossible. Still, all the strangeness makes for another cracking case for the world’s greatest detective.