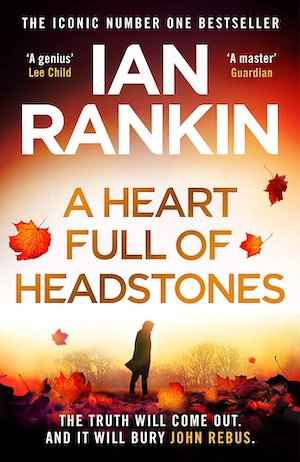 It comes as something of a shock to realise that John Rebus has been around for 35 years – he first appeared in Knots and Crosses, way back in 1987. A Heart Full of Headstones is the irascible ex-cop’s 24th outing in print and these days he’s really feeling his age. Rebus is pushing 70 and all those years of smoking and drinking have taken their toll.

Back in the day, Rebus was a force to be reckoned with in Edinburgh; a loose cannon who wasn’t averse to bending a rule or two in the interests of justice. He is a man who has always trodden a thin line between honesty and what he sees as his duty. It’s an approach that has lost him friends and inevitably rubbed the top brass up the wrong way — but it got results and they tended to reluctantly turn a blind eye. Now, like the smoking and drinking, that uniquely Rebus approach is about to come back and bite him.

As the book opens, Rebus is in the dock, on trial for who knows what. Whatever he is on trial for, it is clear that the sharp old former cop has lost his edge. He is idly daydreaming as around him his future is being decided. What on earth has finally brought him to book? Ah, settle in – because a compelling tale is about to unfold.

Time to flash back a wee while – maybe things will become a little clearer? Edinburgh is gradually getting back to ‘normal’ after the COVID lockdowns and Rebus is in a pub, puzzling over QR codes as fellow drinkers wear masks and give him sidelong glances. The old cop has chronic obstructive pulmonary disease (COPD) which affects the lungs and causes breathing difficulties and is exempt from wearing a face covering but when a text comes through from old adversary ‘Big Ger’ Cafferty he decides it is a good excuse to beat a hasty retreat.

In the dim and distant past, Cafferty was wronged by Jack Oram. Then Oram disappeared and everyone thought he was dead, probably at the hands of one of the gangster’s hitmen. But Oram has been spotted and Cafferty wants to talk to him, make amends, put the past aside. He asks/commands Rebus to find the former bar manager.

Smelling a rat, Rebus wants none of it, but Cafferty has leverage – and is prepared to use it. Which all ties neatly into DI Siobhan Clarke’s current case. Tynecastle is Edinburgh’s most notorious police station and has held that dubious distinction for years, a place where a gang of officers mete out their own justice with very little comeback from on high. Previous investigations have come to naught but now one of the inner circle is about to break ranks. Frances Haggard has been arrested for domestic abuse and will turn whistleblower to save his skin.

Last year, Ian Rankin was our Crime Author of the Year Editor’s Choice award. Readers are invited to nominate their top authors for 2022 here.

In the past Clarke saw Rebus as her mentor, although she has always stayed on the side of the angels. She is under no illusions about her old boss, though, and when his name is whispered in connection to Tynecastle she is on the alert. Can she help Rebus this time? Does she want to help him? Her musings are not made any easier when the Haggard case turns into a major incident and Malcolm Fox is drafted in. He is former Complaints and has had his eyes on Rebus for years. Is he finally destined to get his man?

The wheels within wheels whirr as Ian Rankin’s trademark sinuous plotting takes hold. Everything is connected… maybe. That’s the great thing about A Heart Full of Headstones – the characters and settings may seem familiar but this is an author who wrong-foots the reader at every end and turn.

There’s a skill to keeping a long-running series fresh and relevant and not all authors possess it. Ian Rankin has it in spades and it is demonstrated to full effect here. Even after all this time there are still things to learn about Rebus and by the end of the book you can add a few more little snippets to the long, long list. And as you turn that final page, feel content in the knowledge that there are still more avenues to explore,

Gently apply the brakes a little with this one, it is worth taking your time to savour the prose, like an expensive single malt. Oh, and that title? The Rebus faithful will not be surprised to know it is part of a lyric from the song Single Father by Jackie Leven.