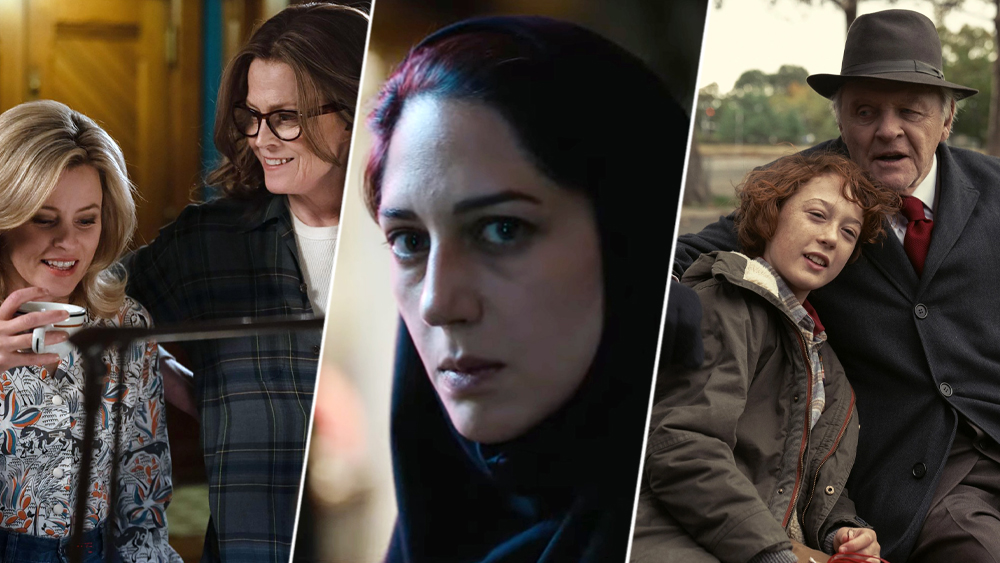 Three films opening this weekend highlight women’s rights, class and racism — nothing ripped from today’s headlines exactly, but features with a distinctive moment and point of view that appear particularly relevant today. Call Jane, Holy Spider and Armageddon Time join Tár, Till, The Banshees of Inisherin and others already in theaters as it gets crowded out there in specialty.

The widest release, Roadside Attractions’ Call Jane opens on 1,070 screens. It stars Elizabeth Banks as Joy, a traditional suburban housewife who falls in with a group of activists after a medical board denies her a “therapeutic termination” despite a life-threatening medical condition. The real underground Jane collective led in the film by Virginia (Sigourney Weaver) arranged illegal abortions in 1960s and ’70s Chicago. The film by Phyllis Nagy premiered at Sundance. Deadline’s review said “ it strikes an upbeat, non-judgmental note while exploring the gender and body politics of the time.”

And of this time, too. Since June when the U.S. Supreme Court overturned Roe v. Wade, abortion has been made illegal or severely restricted in over half of U.S. states with stories mounting of women forced to travel for the procedure while gravely ill and psychologically distraught. This is a major issue heading into the midterm elections next month.

Roadside put the film in a wide cross-section of theaters and markets, a bit heavier on the coasts, aimed at a primarily female audience. “It has beloved actresses and is a story about an ‘everywoman’ in the middle of the situation. [Joy] is a composite character, a woman who was not strongly motivated by the issue, who finds herself in it,” said Roadside co-president Howard Cohen. “This is very accessible film and that’s what we love about it. It’s urgent without being didactic.”

The distributor worked with a dozen pro-choice organizations and abortion care providers including Planned Parenthood LA on advance screenings, fundraisers, theatre buy-outs and original content and PSAs with the film’s stars.

Holy Spider, the Ali Abbasi film made a splash at Cannes, where Zar Amir Ebrahimi won Best Actress and indie distributor Utopia beat out competition to ink its biggest deal ever and what will likely be its widest release.

Amir Ebrahimi plays a courageous young female reporter on the track of a smug serial killer of prostitutes in Iran, who believes he’s doing God’s work. He was protected and supported by a system including police, the right-wing press and fundamentalist zealots. The film hits as the rights of women in Iran exploded as a national issue last month. A 22-year-old woman, Mahsa Amini, died in police custody after being detained for not complying with a headscarf mandate.

Utopia marking chief Kyle Greenberg called the film urgent and timely, but also “stellar entertainment — a true crime film, rooted in film noir.” Q&As this weekend in NY and next in LA are selling well, he said. Los Angeles in particular has a strong Persian community, one of the biggest in the country, that’s extremely supportive of the film.

“We are modeling the release on Drive My Car last year, which really took its time and thoughtfully expanded. We have no intention of rushing it out [but] will platform it into new cities each week into November and December, and the intention is to see it expand wider in January,” said Greenberg. “Without putting the cart before the horse, we are very excited about the potential and the awards conversation.”

This is a deeply personal story of family set in 1980s Flushing, Queens that examines the American dream and the complexity of friendship, namely between young Paul (Banks Repeta) and Johnny (Jaylin Webb), a Black schoolmate. They bond but are ultimately separated in a society marked by race and class that gives Johnny few options. Deadline review here.

Magnolia presents sci-fi mystery Next Exit in NY and LA. The film by debut director Mali Elfman premiered at Tribeca. Katie Parker stars as a research scientist who makes headlines by proving she can track people after death. Her radical scientific study, looking for volunteers for a pain-free passing to the afterlife, attracts two young misfit strangers. On VOD Nov. 4.

A24 and Apple TV+ present Causeway with Jennifer Lawrence and Bryan Tyree Henry at Village East Cinemas, on the streamer Nov. 4. The film premiered at TIFF and played the BFI London Film Festival. Deadline review here. Lawrence is Lynsey, an wounded Afghanistan veteran who returns home to live with her mother (Linda Edmond) in New Orleans, taking tentative steps to recovery. Directed by Lila Neugebauer from a screenplay by Elizabeth Sanders, Luke Goebel, and Ottessa Moshfegh.

Netflix presents Elvis Mitchell documentary Is That Black Enough For You?!? in three theaters: IFC Center in NYC, the Bay in LA and Landmark Opera Plaza in San Francisco. World premiered at the New York Film Festival.

The streamer opens The Wonder next Wednesday in 30 theaters in 15 cities including IFC Center in NY, the Landmark Westwood and the Bay in LA and TIFF Bell Lightbox in Toronto. Debuted at Telluride. Directed by Sebastian Lelio. Florene Pugh is an English nurse in 1862 engaged to come to rural Ireland to tend to peasant girl Anna (Kila Lord Cassidy), who survives for months without eating as tourists and pilgrims mass to her side. Adapted from the novel by Emma Donoghue. Deadline review.

3388 Films releases A Hundred Billion Key, the hit comedy from Vietnam that premiered Stateside at the Newport Beach Film Festival earlier this month. By Vo Thanh Hoa. The film is adapted from Kenji Uchida’s award-winning 2012 Japanese film Key of Life. It follows a notorious assassin who loses his memory and fortune at the local bathhouse.

Rhino Entertainment and Trafalgar Releasing present Grateful Dead Meet-Up 2022 on Nov. 1 in about 500 theaters in U.S./Canada. Celebrating the 50th anniversary of one of the Grateful Dead’s most iconic gigs from the Tivoli Concert Hall in Copenhagen, Denmark, on Apr. 17, 1972. The performance was part of the band’s legendary Europe ’72 tour and resulting blockbuster live album, which was released 50 years to the date of the Nov. 5 screenings. This was the group’s first major live concert broadcast anywhere (Danish television). Fully restored, remastered and color corrected.

The Avenue releases The System, a thriller written and directed by Dallas Jackson, starring Tyrese Gibson Terrence Howard, Jeremy Piven, and Lil Yachty. Gibson is a former Marine recruited by authorities to go undercover in a notoriously dangerous prison, following a drug bust.