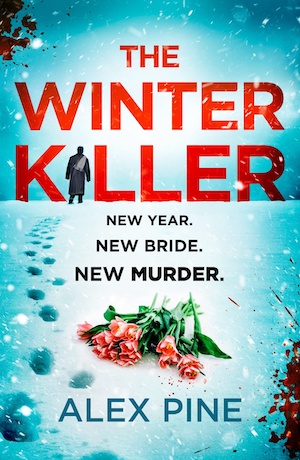 In the third book in the DI James Walker series, Alex Pine turns two festive events into something decidedly more dark and unsettling. Alex Pine is a pseudonym for a crime fiction author who has also written as JP Carter and James Raven. Thus far the Pine novels have all had a winter theme.

The Winter Killer begins on New Year’s Eve. DC Jessica Abbott is attending a lavish wedding at the Fells Hotel which stood on the edge of Cumbria’s Lake Windermere. She’s there with her fiancé, Sean, for the wedding of Libby Elliot and Greg Murphy, one of Sean’s golfing friends. It’s the perfect setting for a New Year’s Eve wedding with gorgeous views of snow-capped mountains and the tranquil lake. But this is a crime novel, and we should know by now that something always lurks beneath the calm surface.

Following the ceremony, Libby notices that Rachel, her sister and maid of honour, has vanished into thin air. Shortly before her disappearance Jessica saw Rachel and a man storm out of her room in a heated argument. Afterwards Rachel tried to drown her sorrows in alcohol and was lastseen in the garden with her sister and an ex-boyfriend, Ethan Prescott.

Jessica calls Detective Inspector James Walker and the team from Cumbria Constabulary are dispatched to the scene. Forensic officers discover Rachel’s purse and glasses on a nearby jetty, along with traces of blood. Rachel appears to have been injured and fallen into the water. When her body is discovered with headwounds the cause of death is found to be blunt force impact to the back of the head. Did Rachel fall off the jetty in a drunken stupor or did one of the people she saw last attack her?

The police team have their hands full with a large number of guests, some of whom have consumed a lot of alcohol and whose accounts of events may be hazy. Guests are required to remain at the hotel until their statements are complete. In addition, the crime scene was contaminated when guests assisted in the search for Rachel. Dubbed ‘The Winter Killer’ by the media, could the attacker be among them?

Although everything appeared to be fine on the surface, DI Walker and Jessica uncover resentments, secrets and sibling rivalry between the two sisters. Rachel was supposed to marry ten months earlier at the same hotel but was cruelly dumped a few weeks before the wedding. Her ex-fiancé, Douglas Hannigan, is a dubious character who had political ambitions until someone, possibly Rachel, exposed his drug habit.

Walker and Jessica have far too many possible killers and detangling the complex web of lies almost every character is spinning proves to be difficult. Pine does a good job of reminding us who is who in the plot. The details of the various characters, their ins and outs, and the sequence of events are frequently repeated. This means it’s easy to keep track of them but it does slow the pace of the novel.

Although DCI Walker is the series’ main character, Jessica appears to be taking on a larger role. We do, however, get to see more of Walker’s tender side and personal life. He regrets not spending New Years’ with his wife, Annie and young daughter, Bella, especially since she seems to be falling sick. His humanity shines through when he expresses empathy for Rachel’s parents, which he finds easier to do now that he has a daughter of his own.

It would be easy to categorise The Winter Killer as a cosy crime mystery, but only because of its picturesque, rural setting. It’s a crime novel full of deception and subterfuge, but there are almost too many twists and suspicious characters with secrets populating these pages. When the killer is revealed, it feels slightly anti-climactic, because we’ve been introduced to too many potential culprits already. Suspicion fatigue. Nonetheless, The Winter Killer is an enjoyable read, especially if you dislike weddings and New Year’s Eve parties!