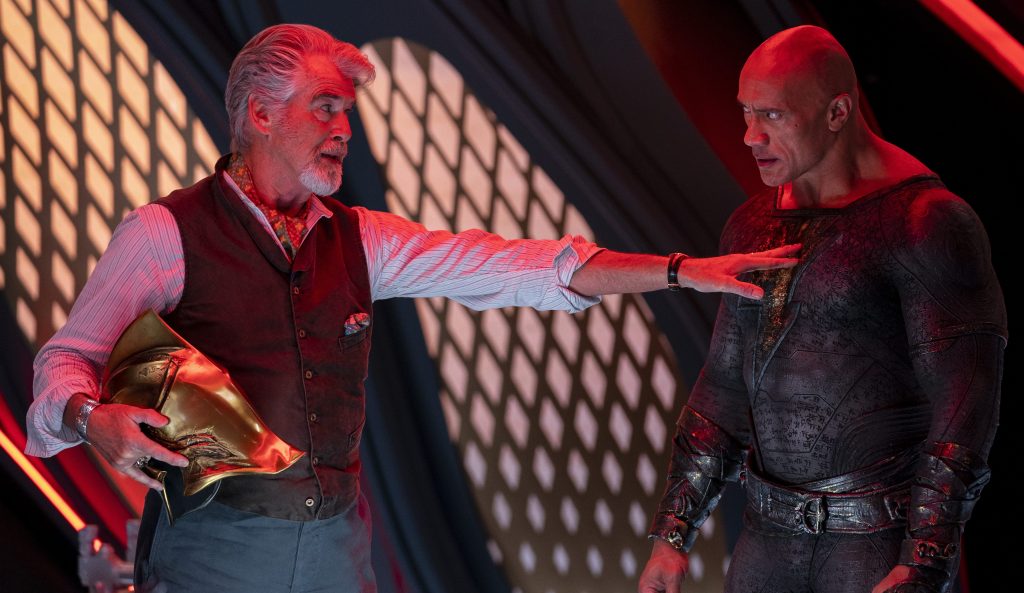 SUNDAY AM Writethru: after Saturday update w/chart Halloween adjacent weekends have rarely been good ones at the box office, and even less so during the pandemic, when there aren’t a lot of solid movies in cinemas. Saturday night is largely party night, not movie night. All titles this weekend are expected to gross $69M, just 7% up from last year’s $64.3M, but at a great drop from last weekend, when New Line/DC’s Black Adam propelled industry ticket sales, -40%. Pre-pandemic, the last weekend of October rang up $107.6M in 2019 and $105.7M in 2018, per Box Office Mojo.

Also not overindexing, no thanks to Halloween syndrome, is Lionsgate’s PG-13 horror film Prey for the Devil at 2,980 theaters, which made $2.8M on Friday (including Thursday previews) for what looks to be a $7.02M start third place. That’s close to where Lionsgate was projecting the film. It arrives in an already horror-laden marketplace, with Halloween Ends set to finish its third weekend with $60M-plus, and Paramount’s slasher sleeper Smile going to $92M-plus by tomorrow. Prey for the Devil, despite being a slightly different kind of exorcism film in its female-driven conceit, isn’t spreading the spirit all over this land, with a C+ CinemaScore, 68% Rotten Tomatoes audience score, and 64%/2 1/2 stars on Comscore/Screen Engine’s Posttrak.

RelishMix measured the social media universe for Prey for the Devil at 62.1M across Facebook, Twitter, YouTube, Instagram, and TikTok spurred by 29.4M for the latter on Lionsgate’s official channel. That outpaced the pic’s 20.8M YouTube views on eight studio-owned videos before opening.

United Artists Releasing’s third weekend expansion of Till at 2,058 locations notched an A+ CinemaScore and 91% positive on PostTrak, mostly women at 61%; with $1.03M on Friday and $2.81M for the weekend, and a running total of $3.6M for the Eon Production. That’s the third film this year to get an A+ CinemaScore. Black moviegoers gave Till 94% on PostTrak. Much older audience here at 84% over 25, 63% over 35 and close to have over 45 with 27% over 55. Diversity demos were 38% Caucasian, 42% Black, 11% Latino and Hispanic and 9% Asian/other. Till saw most of its box office coming from the Southeast, Northeast and Midwest.

Says UAR Distribution Boss Erik Lomis about Till, “The film’s tremendous word of mouth and exit polling bodes well for a long-term run of the film at the box office.  Overall, the marketplace for upscale drama is still recovering and that had a drag on all films overall.”

Trafalgar Releasing has the concert movie, Coldplay Music of the Spheres Live Broadcast from Buenos Aires, booked at 829 runs in 179 markets across only two showtimes. Friday’s was live and Saturday was a rebroadcast. It posted solid core runs in NYC, Los Angeles, Philly, San Francisco, DC, Seattle, Miami, Orlando, Baltimore, Salt Lake City and Toronto, with $673K on Friday for a $1.015M weekend. Clearly, older-skewing movie here, as Trafalgar’s younger skewing BTS Permission to Dance on Stage saw a $6.8M opening back in March at 803 theaters.

Focus Features’ fourth weekend wide expansion of Todd Field’s TAR at 1,087 made $340K on Friday, for a $1.02M 3-day and running total of $2.48M. Critics love the return of Field’s directing after a 16 year break at 94% certified fresh, Cate Blanchett is arguably a lock for Best Actress at the Oscars, but audiences couldn’t take the 2 hour and 38 minute movie about a Type A Personality classical conductor at 72% positive on PostTrak, 42% definite recommend. The movie skewed 54% female, older at 81% over 25, 59% over 35 and close to half over 45 and 34% over 55. TAR played best in New York and LA, however ticket sales got lighter the farther you got away from each metropolis.

James Gray’s Armageddon Time, also from Focus, was booked in six NYC and LA theaters at Lincoln Square, Union Square, Alamo Drafthouse Brooklyn, Century City, The Grove and Burbank AMC for $35K on Friday, $72K opening weekend in a light $12K per theater. We heard Lincoln Square and Grove were the strongest of the bunch.

Banshees of Inisherin (Sea) 59 (+55) theaters, Fri $210K (+211%), Sat $185K Sun $145K 3-day $540K (+117%)/Total $790,7K/Wk 2
The top two grosses for the Martin McDonagh directed and written movie came from Canada with the single screen art house, the Park in Vancouver, as the highest gross in North America followed by the Varsity in Toronto. Five out of the top ten grosses came from the Alamo Drafthouse. Other highlights include the Coolidge Corner in Boston, Cinema 21 in Portland, Uptown in Seattle, and the Jacob Burns in Pleasantville NY.  Angelika and Lincoln Square in New York are also ranking in the pic’s top ten.

FRIDAY AM UPDATE: New Line/DC’s Black Adam ends its first week at the domestic box office with $83.4 million, which is slightly ahead of what Dwayne Johnson’s Fast & Furious spinoff Hobbs & Shaw did in its first week at $83.1M. That’s impressive considering Black Adam is a deeper-universe DC character, while the other was connected to a long-established franchise — not to mention Hobbs & Shaw debuted in the summer.

Meanwhile, Lionsgate has the sole new wide release this weekend in the PG-13 horror film Prey for the Devil, which isn’t expected to do much in the high-single-digits at 2,980 locations. Lionsgate typically launches a genre title around Halloween; its Boo! A Madea Halloween debuted to $28.5M in the penultimate weekend of October 2016 and went on to have a -40% hold in weekend 2 with $17.2M. Last night, Prey for the Devil did $660,000 at 2,450 theaters.

Prey for the Devil stars Roadies’ Jacqueline Byers and 13 Reasons Why’s Christian Navarro, and is directed by The Last Exorcism’s Daniel Stamm. Byers plays Sister Ann in the film, and she believes she’s answering a calling to be the first female exorcist… but who, or what, called her? She seeks out a place at an exorcism school reopened by the Catholic Church. Until now these schools have only trained priests in the Rite of Exorcism – but a professor (Colin Salmon) recognizes Sister Ann’s gifts and agrees to train her. Thrust onto the spiritual frontline with fellow student Father Dante (Navarro), Sister Ann finds herself in a battle for the soul of a young girl, who Sister Ann believes is possessed by the same demon that tormented her own mother years ago.

Elsewhere Thursday, Universal’s George Clooney and Julia Roberts romantic comedy Ticket to Paradise ended its week one with $23.7M. Yesterday was $1.5M, -8% from Wednesday at 3,543. It’s going to be fun to watch how much this older-skewing female comedy can leg out. A stateside haul of $60M is a solid projection, but can it do more? Pic came in ahead of forecasts last weekend with $16.5M.

Halloween Ends from Universal/Blumhouse/Miramax ends week 2 with $10.3M, a 14-day total of $56.5M, and a second Thursday of $497K, -8% from Wednesday. The pic is also available to watch on Peacock.

A few films, particularly those that were on the arthouse sector, are going wide today. United Artists Releasing’s Till from Chinonye Chukwu will expand into 2,000 theaters. Standing at 98% certified fresh on Rotten Tomatoes, the pic is expected to bring in around $4M.

Searchlight’s Martin McDonagh pic The Banshees of Inisherin is expanding into 59 theaters across 11 additional markets after its beefy theater average last weekend of $45,200 (the highest so far this fall). The Colin Farrell-Brendan Gleeson movie’s first week clocked $251K.

Focus Features has the James Gray autobiopic Armageddon Time booked at six locations in New York City and Los Angeles. The movie, which stars Anne Hathaway, Jeremy Strong and Anthony Hopkins, follows Gray’s life growing up in Reagan-era Queens. Since its launch at the Cannes Film Festival, the pic has garnered 80% fresh on Rotten Tomatoes.