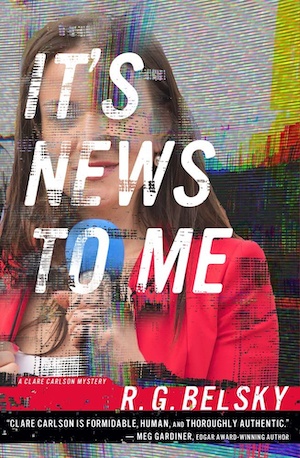 The fifth entry in RG Belsky’s Clare Carlson series includes all the features his fans have come to appreciate – an interesting plot, brisk pacing and, best of all, the self-deprecating wit and chutzpah of Clare herself.

In this story, Clare’s Manhattan newsroom is abuzz about the murder of Riley Hunt, a beautiful blonde-haired, blue-eyed college co-ed with everything going for her. Just the kind of ratings-bait television news loves to exploit. Clare herself is fully aware of the other tragedies, the other deaths that get shunted to the background in favour of those with ‘blonde white single female’ victims, but ratings are ratings.

Clare began as a newspaper journalist and was probably always a cynical observer of the rush and foibles of New York life. When her newspaper folded, she took a job as news director at a local television station and she can’t get past thinking television news coverage is shallower than print. But, hey, a girl’s got to eat. She does what she can to maintain journalistic standards and keep her staff and on-air talent in line. That’s not easy when her principal newsreaders are a married couple with an excess of stresses on the home front.

It all sort of perks along until the station owner throws a spanner in the works. He’s bumping Clare’s long-time boss upstairs to be a consultant, a make-work job if Clare ever heard of one, and hiring a new executive producer. Susan Endicott is a woman known for dramatically increasing station ratings and she doesn’t care what tricks she has to use to do so. Clare loathes her before they’ve even met. Susan tries to make it clear that she is in charge and won’t put up with Clare’s habit of going off on her own and making decisions without approval.

Like Clare, you will be girding yourself for the inevitable confrontations between them. Susan’s sensationalism to boost ratings and Clare’s loyalty to journalism ethics are bound to conflict. Yet, much as Susan blusters and threatens, she can’t quite rid herself of this annoying staffer, with her Pulitzer Prize and her record of breaking important stories.

The reportage of Riley Hunt’s death is expected to come to an end after a homeless veteran is arrested and charged with the crime. He’s in possession of Riley’s cell phone and her blood is on both it and him. We fans of Clare know that this tidy conclusion won’t satisfy her.

She continues to investigate, learning that one of Riley’s admirers is the son of a major organised crime figure who demands his son be left completely out of this story. Another admirer, who claims Riley was his fiancée, is the son of a deputy police commissioner. If Clare pursues her inquiries, she is certain to offend one or both of these powerful fathers. Meanwhile, her boss Susan considers the Riley Hunt case closed, yesterday’s news, and keeps demanding that Clare stop.

Clare’s doggedness keeps the story moving and a string of new revelations come quickly. As much as they change the situation, what doesn’t change is Clare’s irreverent humour, which will keep you chuckling. Her spirited repartee, regardless of the circumstances, is an antidote to anything dull. Belsky has quite deftly developed the voice of Clare and she may seem like a few people you know – or want to know.

Clare is an excellent newswoman and quick to spot fabrication or waffling on the part of whomever she interviews. Unfortunately, those skills don’t transfer to her personal life. Her devotion to the job has meant too little of her has been left over for a husband. Or two or three. She’s also in occasional touch with men from a number of other past relationships, which usually failed because the man in question was married to someone else. Despite Clare’s terrible track record, her friend Janet keeps trying to fix her up and her latest, a Princeton University Spanish professor, seems more than promising.

As a college journalism major myself, I have a soft spot for stories about newsrooms, intrepid reporters and the tension between the fast pace of new events and the slow and painstaking work of investigation, not to mention the conundrums that face an increasingly embattled profession. I look forward to each new adventure of Clare and her team, and so will you.

You might enjoy these Clare Carlson books too: Beyond the Headlines and Below the Fold.