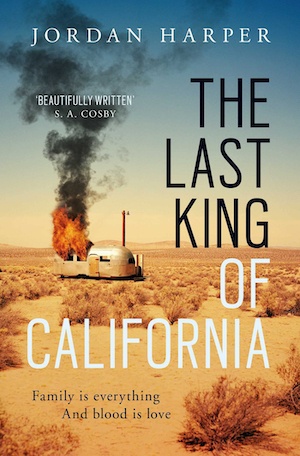 To say anticipation was high for the latest novel by Jordan Harper would be something of an understatement. His 2017 debut, She Rides Shotgun (A Lesson In Violence in the UK), picked up a prestigious Edgar Award and we awarded it five stars as well as interviewing the author. We certainly didn’t expect to have to wait five years for a follow up, so when not one, but two, new novels were announced, we thought the crime fiction gods were truly smiling upon us. Weirdly, The Last King of California is published only in the UK and the second novel, Everybody Knows, due in January, only has an American publisher.

The Last King of California shares the same meth-fuelled, white power gang world of She Rides Shotgun. Indeed, Nate and Polly McClusky’s exploits are referenced more than once in the novel though neither character actually appears. Instead, this is about two youngsters on the periphery of that gang world. Luke Crosswhite is 19 years old and, having failed at the straight life, is returning reluctantly to the world of The Combine, a small independent gang. His father, Bobby, runs the gang from his prison cell while his uncle, Del, has command on the outside.

Callie is Luke’s childhood friend. She’s slightly older and exists with her boyfriend, Pretty Baby, on the margins of the group, doing whatever low-level tasks need to be done but dreaming of more. She’s totally in love with Pretty Baby, and prepared to overlook his weakness for downers – a blind spot that just might get her killed – and looking for her ticket out of the life. But there are rules to gang life. Discipline for breaking them is harsh and likely permanent. Her plan to sell some drugs independently of the gang is breaking all of them, but the risk is worth it.

Time, and capitalism, have caught up with The Combine. They’ve remained independent ever since their inception. ‘Blood is Love’ is their motto, and a black heart tattoo is The Combine’s sign of full affiliation. Now, the all-powerful Aryan Steel has come to unite the gangs under its leadership – a burnt and crucified victim serves as a warning to all those who decide to hold out. The Combine faces a stark choice; either accept the rule of Aryan Steel and kick back a portion of their profits or face a gang war they can’t win. Luke, who was treated with disdain before proving his mettle to Del, has to decide for himself where his loyalties lie.

The Last King of California’s self-contained world makes for a quick, explosive read, and the writing is once again excellent. The author brings the brutal, paranoid world of the gangs to life, and has a remarkable facility to find the humanity in even the most amoral characters. In lesser hands this could have descended into depressing, off-putting nihilism, but not here. Jordan Harper’s empathy with outsiders ensures Luke and Callie are brought to life with the same skilfulness as Nate and Polly were five years ago. Pretty Baby is a modern spin on the quintessential noir victim.

My only gripe, and maybe it’s a selfish one, is that I would have liked to see him stretch his wings more and explore a different part of Californian life. Then again, Everybody Knows sounds like it may be that novel.