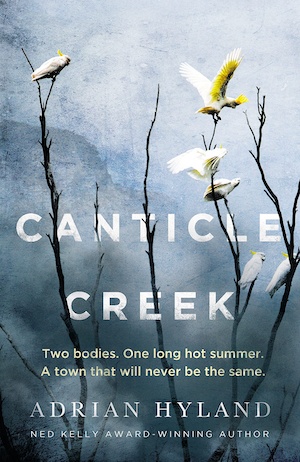 Jane Harper really started something with The Dry, now Antipodean crime fiction is so popular in the UK that Australian publisher Ultimo is releasing new titles directly. Following Sulari Gentill’s The Woman in the Library we have Adrian Hyland’s Canticle Creek. It’s a gritty, inventive slice of Outback noir that at first appears to be a routine mystery but soon becomes more involved and deeply intriguing.

The story begins on and around a ranch in a place called Canticle Creek, near Melbourne. Possum – real name Alice – is a typically curious teen so when she hears sirens in the distance she rides over for a look-see. She bumps into Daisy Baker and her new boyfriend Adam, who’s from a small place called Kulara, deep in the Outback. They seem happy together and tell Possum about the accident.

The next day when Possum rides over to see Daisy she’s shocked to find that her friend has been brutally murdered. Later the police find Adam’s body a short distance away. It appears he’s driven his car off a cliff so the case is closed. Despite little evidence to support it, the police assume Adam killed Daisy in a drug fuelled row and then he either committed suicide or had an accident trying to escape justice.

Back in Kulara, leading senior constable Jesse Redpath doesn’t buy that version of events. Sure Adam was always in trouble, but nothing like this. The last time he fell foul of the law, a few months earlier, Jesse stood up for him in front of the judge, and then found him a job and a place to stay with her artist father. Adam liked her father, and turned out to be more than a graffiti menace. He was eager to learn from the old artist but it lasted only a week before Adam did a runner.

There were plenty of rumours about where Adam might have gone and Jesse tried to track him. Then he turned up dead in Canticle Creek, supposedly guilty of murdering a young woman there.

Jesse and her father head to Melbourne, ostensibly for an exhibition by Kenji Takada, a Japanese artist who settled in Australia and influenced the local art community, but it’s a cover. An excuse for Jesse to go poking around in what happened to Adam. Detective Senior Sergeant Wallace, who managed the case, is not keen on Jesse sticking her oar in. Will they be able to get on?

It’s not long before Jesse finds some inconsistencies in the case that seem to back her appraisal of Adam as innocent. Possum, who saw both victims before the fatal incident, says they was no sign of any trouble brewing, they were sober and in love. The more questions Jesse asks the more convoluted things get. The mystery links Kurala and Canticle Creek, loggers and landowners, a botanist called Wolf Gunther, a refugee from Bosnia and a nasty gangster called Eddie Razic. Not to mention a missing American hunter who had all the right gear heading into the Outback but was never seen alive again in the dry country. Aboriginal community policeman, Danny Jakamarra, fears the worst for him.

Jesse Redpath is an interesting detective to spend time with, facing up to sexism and the walls put in front of a woman detective, especially one investigating a case outside her jurisdiction. A second outing would be welcome if Hyland has a mind for it. She has great intuition, a strong sense of what’s right and is a savvy detective. She’s also very down to earth and easy to like. The time she spends with her father is a treat – a grumpy old curmudgeon with softer edges than he’d care to admit, very proud of his daughter but not keen to let on. Their relationship plays into the story nicely.

Canticle Creek has the feel of the Outback, of small town claustrophobia, but also the encroaching perils that the city and the wider world bring. The theme of climate change underpins the novel. The tension between money and human activity and the changing environment feels urgent and real. This universal theme woven into a gritty rural drama is a key component of the best Outback fiction. From The Stoning by Peter Papathanasiou to novels by Garry Disher and Chris Hammer – there’s a lot of Australian crime fiction to choose from. But Hyland makes the grade and well worth seeking out.