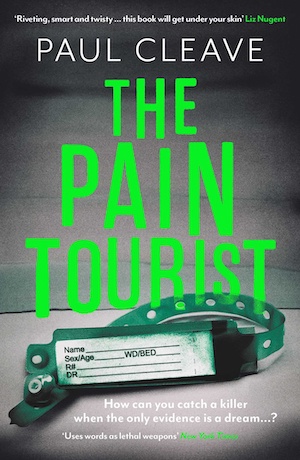 Taut. Twisty. Propulsive. You can trot out all the cliches regularly used to describe thriller fiction and use them with abandon for Paul Cleave’s new police procedural, The Pain Tourist.

In Christchurch, New Zealand, a serial killer named Joe Middleton was caught but somehow escaped and is still on the loose. New murders occur, staged like some of Joe’s work, but Detective Rebecca Kent is persuaded these crimes are not Joe’s handiwork, but that of a copycat. Before long, even the media call the perpetrator ‘Copy Joe.’

A home invasion nine years earlier left Frank and Avah Garrett dead. Their 11-year-old son, James, remains in a coma with a bullet wound to the brain, and their 14-year-old daughter, Hazel, who escaped the house, is trying to piece a life together. The three men seen running from the Garrett home have never been identified.

While Detective Kent investigates the Copy Joe case, alternating chapters provide insight into what’s going on inside the head of the comatose James. It’s a lot, and it’s fascinating. His mind is constructing an alternative reality – one in which his parents don’t die and he and his sister Hazel carry on their lives as they would have been. Eight years and 10 months later, in the now of the novel, James wakes up.

As he describes his memories during those years, Hazel and his doctor see correlations with real-life events. James calls what’s in his head Coma World. In Coma World, he had adventures that drew from the books Hazel read to him. The dates he believes certain events occurred match reality. Naturally, the police want to talk to him to find out whether this amazing memory contains clues from that fatal night. He agrees to try. It’s an intriguing possibility, with loads of implications.

Detective Inspector Rebecca Kent is assigned to James’s case, and because her old friend, retired Detective Inspector Theodore Tate, worked the original case, she gets in touch. He’s a pain in the neck, but he’ll know things not in the files. Theories, hunches. Tate is now working as a technical advisor for true crime television shows. The husband of one of Joe Middleton’s victims calls these people ‘pain tourists.’ Cleave nicely portrays the rise in true crime ‘entertainments’, the dark side of the audience obsession and the shamelessness of the media.

Cleave has a special talent for misdirection, which you don’t fully appreciate until near the book’s end. He already has a lot of plates spinning when the police are presented with a new problem. In Coma World, James learned that the husband of a fellow coma patient, Georgia Perry, was arrested for killing her. Had he overheard something he worked into his narrative? In real life, Georgia’s calamitous fall was deemed an accident. But given how accurate many of his other memories are, can the police ignore this possibility?

Tate can’t help himself, and becomes involved with both cases – James’s and Georgia’s. It’s risky for Kent to consult with him and likely to bring trouble down on her. But she shares one serious concern of Tate’s, that the men who killed James’s parents will come back to finish the job. Of course, if Georgia Perry’s husband truly is guilty and gets wind of these new suspicions and where they came from, there’s no telling what he will do, either.

Rebecca Kent and Theodore Tate, are solidly written characters. Hazel and James’s relationship is especially close, despite almost nine years of separation. It’s a cup of kindness in a vat of cruelty. James and his prodigious abilities form a completely believable, highly sympathetic character. Along the way, numerous minor characters are given enough detail for plausibility. Maybe the bad guys are a bit too irredeemable, though that merely raises the stakes. This is a fast-moving, engaging story that has something to say and is hard to put down.

DI Kent previously appeared in last year’s excellent The Quiet People. Or you might like Andrew Field’s All Down the Line.