Chloe Kim has never been afraid to fall down (she always gets back up), nor to ask for food in the middle of a press conference (she’s frequently hungry, she said…), even less to perform unbelievable tricks, spins, and flips that she alone masters (at the 2022 Olympics in Beijing, no less). Not even gravity can pull her back down to earth. But back on the ground, we are having connection difficulties. Thankfully, the blank Zoom screen is broken by the sound of her bright and bubbly voice. Let’s talk with Chloe Kim, the prodigy who reached for the stars.

At 4-years-old, her dad put her on a snowboard, at 6, she competed in her first competition, at 7, she won the Junior National Championships. At 15, Kim participated in the Youth Olympic Games (YOG) in Lillehammer, Norway, winning two gold medals. In Aspen, Colorado, she became the youngest snowboarder and the youngest half-pipe Olympic snowboard champion at the Pyeongchang Winter Olympics in 2018. Today, at the age of 22, she has accumulated two Olympic gold medals, two world titles, six gold medals at the X Games, and two World Cup titles. Oh, and she’s a newly-minted ambassador for Breitling’s “All-Star Squad.”

Off the charts in terms of coolness, paired with a sparkling personality, Kim is enthusiastic, engaging, and committed to environmental and social causes. Open-minded and at ease between two cultures, Korea and America, the Los Angeles-based champion travels quite a lot. When she was younger, she lived in Switzerland, where she also mastered French. With her blonde locks, the SoCal girl is every bit chatty, (almost) like any other young adult of her age, fueling a love for fashion, watches, makeup, K-Pop, and partying with friends. She binge-watches Netflix. Indeed, she is taking a much-needed and well-deserved season-long break after 15 years of intense world class competitions. As Kim presses pause, she discusses her next challenge, mental health, and luxury watches. 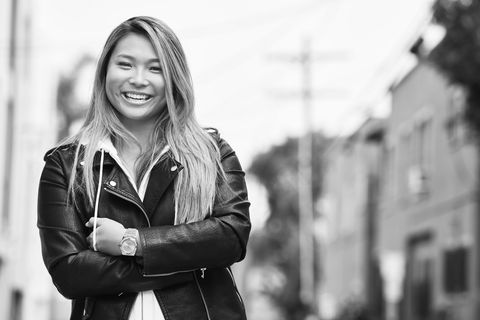 From Korea to the United States, can you share a bit about your background?

My background is all over the place. I was born and raised in California. [Ed. note: Kim’s parents emigrated from Korea and met in Switzerland, when they both worked for travel agencies. They ended up in Southern California, where they raised their three daughters.] I actually lived in Geneva for a couple years. So I started traveling the world at a young age, being able to compete. I never thought I would get to this point though, I’m super happy about it! I started snowboarding when I was four. I went with my dad, and just fell in love with it. I was able to bond with him on the mountains, being able to travel together [and] make a lot of friends and get better and better at snowboarding. I can’t believe I’ve been doing it for so long—18 years!

At 17, you became the youngest half-pipe Olympic snowboard champion at the 2018 Winter Olympics in Pyeongchang. How did you discover half-pipe?

I actually hated half-pipe when I first discovered it. It was scary, and I was not good at it. But it was because Mountain High, where I started snowboarding, didn’t really have a big 22-foot competitive-style half-pipe. I never really got to experience half-pipe snowboarding until I was in Switzerland, actually. Then, my first international competition in a 22-foot half-pipe was in Laax, for the European Open. I won the Junior Jam, and then I was like “Oh, this is fun.” Then I kept going and kept training, and now I love it.

What are your next challenges?

I’m taking this next season off; I got back from Beijing this February and I’m pursuing other things right now. I’m going to hang up the bib for this season—but I’ll still be on the mountain snowboarding, riding powder, having so much fun with friends. I won’t be competing this next season. I’m excited for this time off because going to the Olympics is quite exhausting mentally, and I just need to give myself some time before I do it again.

You have been collaborating with the BetterUp platform, which focuses on mental fitness, specifically “to strengthen your mind, the same way you do your body.” What prompted that?

What BetterUp is doing is incredible. Mental health is so important. I don’t really think I gave my mental health the necessary attention until the last couple of years (TD;LR: she was burnt out before the pandemic). I didn’t realize how many people it affected, and I thought it was just me. But when Simone Biles, Naomi Osaka, and all these incredible athletes started coming out talking about their mental health, about what their challenges and struggles are, it encouraged me to do the same. It made me feel like I wasn’t the only one going through this, and that I shouldn’t be ashamed. The minute that happened, I started prioritizing my mental health and I continued to spread this positive message. I also met with Prince Harry [BetterUp’s Chief Impact Officer), which was really cool.

Who emotionally supports you?

My dad. Even at the Olympics, I got so nervous before, I called my dad immediately, like, “Help!” And he said, “You’ve got this, you’re fine, don’t worry!” He was my coach until I was 13; he taught me everything.

You’re part of a new crew, the Breitling “All-Star Squad.” How did this collaboration come about?

I’ve been working with Breitling for a few years now, and in the beginning, they said that they would love to put me in an “all-star squad” with Erling Haaland, Giannis Antetokounmpo, and Trevor Lawrence, and then it finally happened! It’s awesome that we get to collaborate with other athletes and become this super squad.

All men! What do you think about the position of women in sports today?

It’s incredible how far we’ve come as women, and how we are finally getting the recognition that we deserve. There have been so many incredibly powerful female athletes who have driven this progressive movement. So, I am really proud to be a part of this change. A lot of great things are coming out of it.

You share the same environmental and social commitments as Breitling. How is its brand-new Super Chronomat Automatic 38 watch sustainable?

I love that watch so much. I have other models, too. This specific model offers a full supply chain traceability, so you know where the precious materials are coming from: the diamonds are lab-grown and the gold is from a small-scale artisanal mine in Colombia, which meets social and environmental standards. That’s one of my favorite things about Breitling—they are as sustainable and incredible as you could hope.

And what are its other aesthetic advantages?

I’m a girl that likes diamonds! I like shiny things, and I can tell you that these watches are very shiny. I love that a lot of them feel very unisex, like I’ll be wearing a watch and my dad’s like, “I want one of those.” And I’m like, “Oh, well it’s mine, so you can’t have it!” [laughs]. I have a selection of Breitling watches, and I love wearing a new one every other day and matching it with my outfit. Since working with Breitling, I’ve been hooked on watches—I can’t get enough!

Who are some of your favorite fashion designers?

I love fashion. I grew up in L.A., so I feel like I was always surrounded by it. Also, traveling to Europe a ton, which is fashion central, I definitely got a lot of inspiration and started to love fashion more and more. It’s always summer here in L.A., so it makes it very easy. Ninety-nine percent of the time I’m actually wearing sweatpants, because [right now] I would rather stay at home and watch Netflix [laughs]. Ever since I was 13, I have been such a huge fan of fashion. There are so many incredible designers, I actually just went to a Baptiste Cavalli dinner last night, who designed my dress at the Met Gala. So exciting!

Have you experimented with shopping in the metaverse? Do you already have an avatar?

It’s so cool! I’m working with this company right now who make houses for famous people in the metaverse, so I got one in their athletes’ villages. I’m super excited about that, I think it’ll come out next year. Hopefully my house is like a Breitling shop where you can buy all the watches you want! [Laughs.]

You appeared in Maroon 5 and Cardi B’s “Girls Like You” music video in 2018, and in the film Charlie’s Angels in 2019. Is there a chance of a career change on the horizon?

I’m working on it. We’ll see what happens next! One of my sponsors, Roxy, has actually allowed me to create my own signature line, so I’ve been privileged enough to design a bit recently. It comes out this November. It’s been so exciting. I have an amazing team helping me doing it, but it’s a lot of hard work, so I have great respect for designers.

Never give up and stay positive, which is so corny, but it’s true. That’s the foundation of why I’m where I’m at now!

What is your perception of time?

I’m definitely somebody who likes to be on time or early. I’m an overachiever. 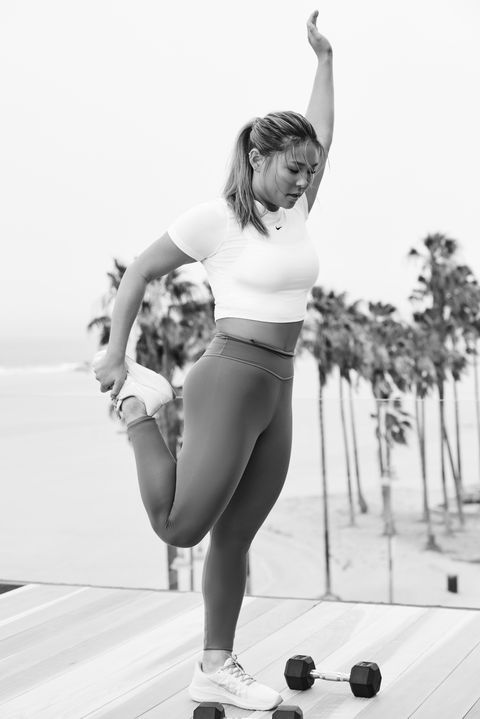 Can you share a beauty secret for beating the cold?

I need the most hydrating moisturizer you can possibly find. Right now, I am actually using Tatcha, which has been one of my favorite brands for a long time. It’s the Dewy Skin Cream. I’m not sponsored by them at all, I’m just being genuine. That is my lifesaver on the go; my skin does not dry out.

What’s your go-to way to thank your body after training?

I go straight to physical therapy, because most of the time after training there are little injuries that need to be treated immediately. I go on a little recovery jog or do a short workout and then I head to the spa. My favorite thing is getting a massage.

Do you have a suggestion for dealing with stress before a big day, like the Olympics?

It’s really hard to relax when you’re in the Olympic Village. Everyone’s stressed but trying to enjoy it. Imagine training for four years for one thing that’s going to end in an hour! The best way to relax is just talking to my family and friends, so I was just on FaceTime to everybody. The Olympics is such a cool experience. It’s amazing, and you can’t even believe that you’re there.

What’s your secret weapon on the slopes?

Music! When I’m snowboarding, I listen to rap. If you see me on the mountain and you try to talk to me, I probably can’t hear you because that’s how loud my volume is—it’s just blasting in my ears.

This interview has been edited and condensed for clarity.