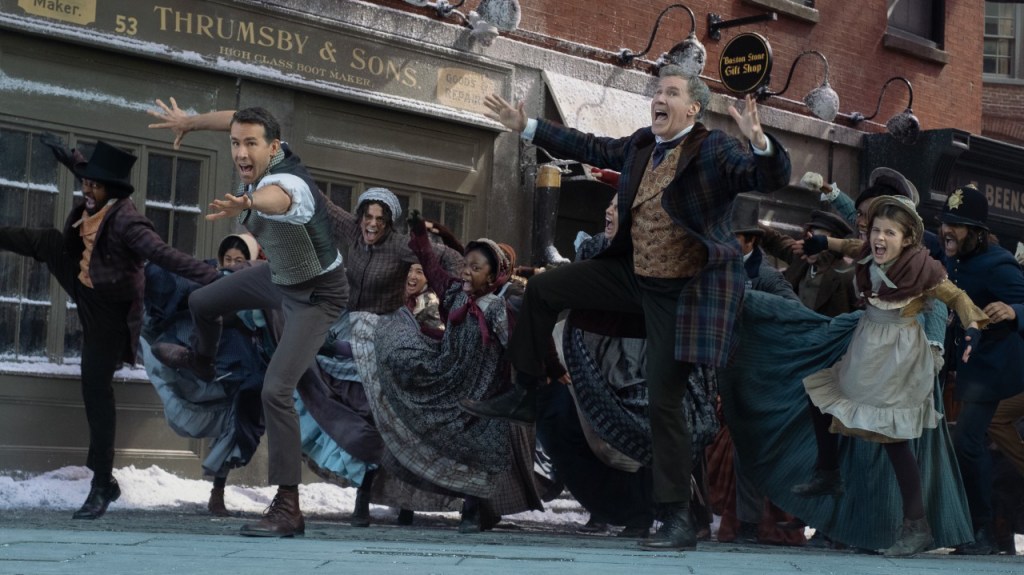 Apple Original Films announced the theatrical release of a new sing-along version of holiday musical comedy Spirited starring Will Ferrell, Ryan Reynolds and Octavia Spencer in 100+ U.S. theaters starting this Friday, Dec. 16. Some of numbers are seen as contenders for Best Original Song.

The film, with original songs by Oscar, Grammy and Tony winners Benj Pasek and Justin Paul (La La Land, Dear Evan Hansen, The Greatest Showman) had a limited theatrical release in U.S. on Nov. 11 before hitting streamer Apple TV+ on Nov. 18. In this version, all songs are featured with stylized lyrics on screen, karaoke style, with each word represented and highlighted to allow viewers to follow along in-time.

That includes showstopper Good Afternoon, written by Pasek and Paul, Mark Sonnenblick, Sukari Jones and Khiyon Hursey. After Ferrell’s character insists that the phrase Good Afternoon was an insult back in the day, he and Ferrell sing and dance (including tap dance) riotously around Dickensian London hurling the burn at strangers. The song, and another, Do A Little Good, have made it onto lists of potential Oscar nominees.

Spirited, by director Sean Anders, will be showing in Cinemark and Megaplex theaters as well as other independent and regional exhibitors. Additional chains may be added later. There’s no word of the end-date for the run. The original film is also still playing in some locations.

Spirited, Deadline review here, is a fresh take on A Christmas Carol from the perspective of the ghosts. Ferrell, the Ghost of Christmas Present, selects dark soul Clint Briggs (Reynolds) to be reformed by a visit from three spirits, but the former Scrooge soon finds himself reexamining his own past, present and future. The characters themselves mock how often the Dickens’ classic has been done and done again on stage and screen in this comedy full of big song and dance number reminiscent of the golden age of movie musicals.

Other original songs include Bringin’ Back Christmas and That Christmas Mornin’ Feeling.