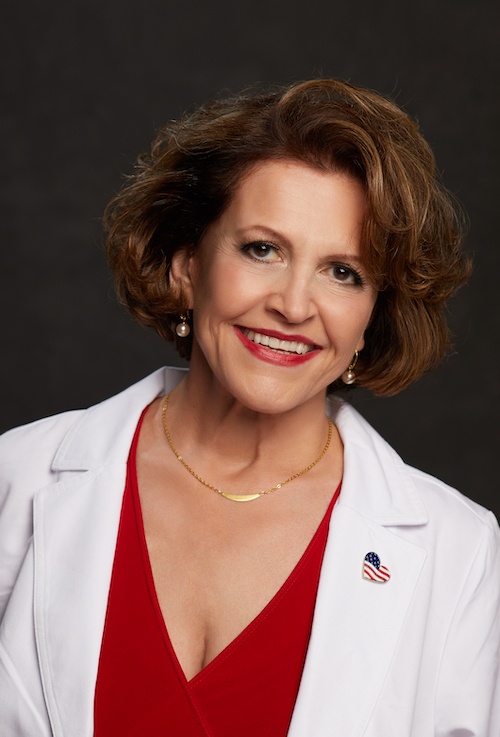 If you love a good medical thriller, then Dissection by Cristina LePort is a book to watch out for. Released earlier this year, Dissection is Cristina’s debut and is based partly on her 30 years of experience as a doctor, and on her love of a suspenseful mystery.

Between the novel’s covers, a DC heart surgeon notices a spike in the number of patients suffering from a rare and complex heart condition called dissection. Someone out there has figured out how to trigger this deadly phenomenon and soon private detective Kirk Miner and FBI agent Jack Mulville are investigating, and soon they are focusing on Dr Silvana Moretti, a researcher in the field.

With endorsements from Lee Child and Tess Gerritsen, Dissection has been likened to novels by Robin Cook and Vince Flynn’s Mitch Rapp series. We invited Cristina LePort in for a consultation. Following her interview below, you can also read Cristina’s description of her journey from medical doctor to medical thriller author.

What will crime fiction lovers love about Dissection?
The fast pace, escalating stakes, heroic behaviour in the face of impossible tasks, breathless suspense, and a fully satisfactory conclusion. EVERYTHING!

The way people are killed in the novel is pretty unusual – tell us more about what happens to them and what causes it?
Dissection stops the arteries and interrupts the heart. Powerful arterial blood splits the layers of arteries like Velcro, obstructing branches as it encroaches them, causing heart attacks and strokes. The trigger used in the novel is at the fringe of what’s possible today.

Who are your three main characters and what perspective does each of them bring?
Kirk Miner, a gumshoe detective; Jack Mulville, an arrogant and undiplomatic FBI agent; and Dr Steven Leeds, a gifted heart surgeon, work together to thwart an emergency medical catastrophe snowballing into World War III. Silvana Moretti, the main female character, is a scientist whose allegiance to the Hippocratic oath remains in doubt for most of the novel.

Where did you get the devious idea behind the book from?
One day I saw a commercial on TV about Aspirin. A man opened a card while a voice said: “Your heart attack will arrive tomorrow.” I thought that was a great idea for a medical thriller.

You’ve got the medical background, but what did you need to research or learn to pull off the thriller element of Dissection?
Bursting with life or death emergencies, the medical world is an ideal backdrop for thrillers. Several of the qualities defining a good doctor overlap with what makes a successful thriller author, such as meticulous work under the pressure of time, and the ability to integrate many clues into a meaningful sum to solve mysteries. Italian by birth, with English being my second language, I perfected my writing skills with the help of great writing coaches and editors.

What cutting edge medical technology will readers discover?
Something that today is already used by doctors to treat arterial obstructions and other ailments.

What were the wider moral, philosophical or societal issues you wanted to explore?
Heroes are regular human beings who keep on fighting to overcome impossible obstacles, despite their fears and limitations.

I also wanted to explore the idea that radical extremists often commit acts of violence in the name of a religion they disrespect.

For some people, ’sudden death’ is a hot topic at the moment and they think vaccines are killing people. Is this post-COVID period an unusual time for medical thrillers? Why/why not, or what are your reflections on this?

A good thriller can entertain you and take your mind off the pandemic, as long as it isn’t about a killer virus….

Who are your crime fiction influences, and what crime novels have you read lately?
Masters of thrillers such as Lee Child, and Michael Connelly, and medical thriller authors. Robin Cook, and Tess Gerritsen are my favourite authors.

What’s next for Cristina LePort?
I already have a prequel, which is the story of how Kirk Miner acquired his strange medical knowledge: Identity Crisis. I also have 2 sequels, both with the same PI, Kirk Miner, and some of the other characters in Dissection. The titles at the moment are Heart Condition and Do No Harm.

You can order a copy of Dissection using the buttons below, or carry reading below where we bring you an article by the author.

My Not So Joyful Journey to Book Publication

During my school years in Bologna, Italy, I hated writing. When I came to the US after graduating from medical school, I barely spoke a word of English. Nowhere in my mind was the possibility of someday writing a novel in my second language, let alone see it published.

About 20 years into my medical career, I suffered a midlife crisis and decided to switch from internal medicine practice to cardiology. While waiting to enter a training program, I became aware of Ayn Rand’s lectures on The Art of Fiction, and loved the feeling of creating a world where I could make anything happen. I decided to write a novel in English.

During years spent under the tutelage of writing coaches and editors, I completed two novels, neither of which was published. But after watching a TV commercial for Bayer aspirin, I got a great idea for a new novel. A man gets a card announcing “Your Heart Attack Will Arrive Within One Hour!”

Researching and writing the book was the easy part. Finding a traditional publisher was the most difficult task of my life. It was tougher than medical school, more challenging than raising three children, more grueling than 20 years of karate training, harder than the eight-hour black belt test, and way more difficult than saving patients’ lives.

I received approximately 400 rejections from agents and publishers. And though my skin rivaled that of an alligator, I could never get used to the hopeless/helpless feeling every time I received yet more bad news.

To seek reassurance that, despite everything I was going through, there was still hope to achieve my goal, I read about famous writers’ rejections. I beat them all. Rejections took anywhere from a few minutes to two years to show up on my phone. My novel was deemed too male, too political, too unrealistic, too popular, too fast, too slow… Soon, it became obvious that, if I transformed my manuscript to accommodate all these ‘expert’ suggestions, my book would disappear.

The worst of the rejections started with praise: how my novel was so good in so many ways. But I soon learned to race to the bottom of the email, searching for that deal-shattering, hope-sinking, three-letter word I dreaded – ‘but.’

Out of despair, I hired a coach to help me find an agent. A simple rewriting of my query did the trick, prompting agents who had rejected my work in the past to finally read my manuscript. I even landed a good agent.

I thought I had it made. My books would sail into the sunset of publication and I would live happily ever after. I didn’t listen to the first thing my agent told me on our first call together: “I’m not sure if I can sell your book. The market is much more difficult than in the old days.” Little did I know I had made it only to first base… and that hitting the needed home run would take three more never-ending years.

In the unlikely event of getting an acceptance email from a publisher during my office hours, I imagined quietly peeling myself off the ceiling, walking into my waiting room, getting down on the floor, and rolling around screaming.

That, however, is not how it happened. My novel Dissection was accepted for publication in March 2021.

For the first time in four years, I could look at my phone without a feeling of dread that I’d received the latest rejection du jour.

At last, I held the SIGNED CONTRACT in my hand. The moment is best summarised by the words of the Italo-American love song That’s Amore:

“If you walk in a dream, but you know you’re not dreaming…”

The process had been a roller-coaster of elation and anguish interposed with intolerable, agonising waiting.

But now my book is there for people to read. I’ll finally have the chance to enter my readers’ lives and take them to my world and the world of my characters, stirring their emotions, and entertaining them with my work.

All this involved mostly work and very little luck, aside from somehow finding the one publisher who unreservedly loved my book. I painstakingly researched, studied, planned and executed my journey, leaving no stone unturned. Most important, I forced myself to get up and back into the fight every time a rejection sent me tumbling into the abyss of despair.

My family was well aware of my long and painful struggle, as exemplified by the card my daughter gave me to celebrate the publishing offer from Bancroft Press. The card featured this comment attributed to Leonardo Da Vinci: “It has long since come to my attention that people of accomplishment rarely sat back and let things happen to them. They went out and happened to things.”