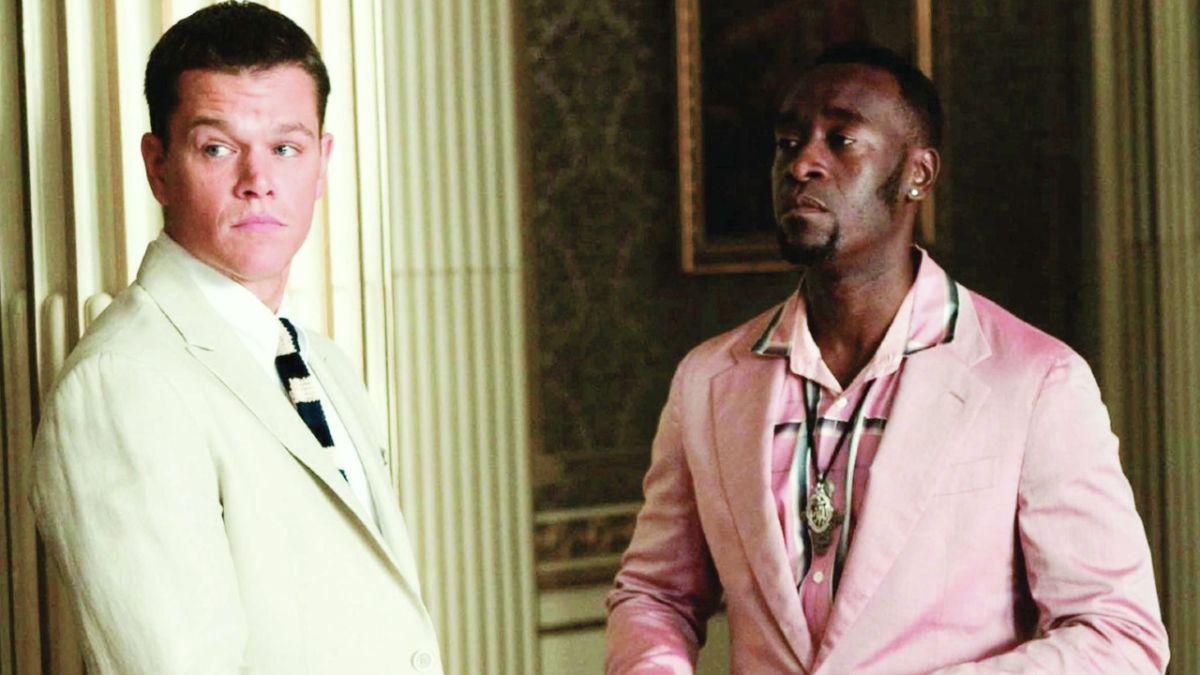 While most people think of the continuing universe of new Marvel movies when they hear the name Don Cheadle, there’s an even wider universe of roles the iconic actor has banked on his resume. Among the most memorable is that of Basher Tarr, the eccentric munitions expert in the Ocean’s trilogy directed by Steven Soderbergh.

It’s a role that’s seen Cheadle finding out that people love to confess to him personally that the middle installment Ocean’s Twelve “sucks.” That doesn’t matter to the MCU vet, despite the fact that playing this card is about as rude as saying he “Aunt Viv’d” his Marvel movie role.

As the actor spoke with GQ about the vast array of parts played in his career, the man known as Col. James “Rhodey” Rhodes since 2010’s Iron Man 2 also told the story of why it was Ocean’s Twelve was the most fun chapter of the ensemble based franchise for him and Matt Damon to film. But first, here’s what Cheadle had to say about those rather uncouth moments:

It’s not that hard to push past whatever reservations you have with the 2004 sequel to the beloved remake of Ocean’s Eleven and just not mention it at all. Why waste your breath hating Ocean’s Twelve when you can tell Don Cheadle that you loved him in Out of Sight? Or maybe you’re psyched about Armor Wars being turned into a movie experience, which will put Cheadle’s Col. Rhodes back on the big screen.

Unpleasantries aside, the fact still remains that the Ocean’s trilogy of thievery is absolutely the epitome of a hangout movie. It was obviously hard work to get Ocean’s Twelve in the can, as making movies isn’t just a walk in the park. Appearances can be deceiving though, as the George Clooney-led ensemble cast always look like they’re having fun on and off camera.

Fun stories involving pranks during Ocean’s Twelve’s production have proven that point to be true. Don Cheadle has his own tale to tell about that European jaunt, and as you’ll read in his continued remarks, not all of the fun depended on those sorts of shenanigans:

Though Cheadle was also pranked on the Ocean’s Twelve set, it was in good fun like the rest of the stories that came from making this divisive adventure. It’s memories like those that’ll make the experience worthwhile to Don, and more than likely his fellow on-screen thieves too. That’s something that not even rude movie opinions can take away.

If you’re open to revisiting Ocean’s Twelve in the name of reappraisal, you can head to TBS, TNT, or truTV and watch the film now. Meanwhile, Don Cheadle can currently be seen in White Noise, which is streaming for anyone with a Netflix subscription.