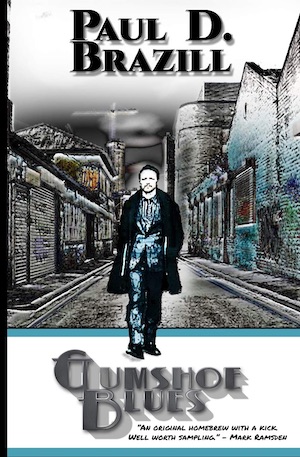 Written by Paul D Brazill — Anyone already familiar with Brazill’s writing, or who has had a look at the many reviews of his work on our site, should be aware that he is not an everyday crime writer. He writes short fiction exclusively, ranging from flash fiction right through to novella length, ignoring novels.

Brazill has a particular style too. It’s informal, full of argot, his characters are known mostly by nicknames that are frequently puns. With the exception of one or two main characters, most lack any kind of common sense or cunning, and their schemes and capers have no more chance of succeeding than an ostrich has of getting off the ground. Humour is ever present, often dark, unsophisticated and absurd. The result is a very kind of British noir, as if Jim Thompson had written his stories of doomed losers on the back of bawdy seaside postcards.

Gumshoe Blues is subtitled The Peter Ord Yarns and collects together a series of vignettes about the titular teacher turned private detective in the fictional North-East resort town of Seatown, which was also the setting for Last Year’s Man and Kill Me Quick. Yarn is a Brazill staple; down on his luck, cynical, but with enough intelligence to navigate his way through the seedy, criminal demimonde he finds himself in.

Do not expect a traditional narrative. Each story starts more or less the same way with Ord reluctantly accepting a case that he knows is a losing hand, and his only priorities are to earn enough money to keep him in booze and fags and to avoid a beating. A multitude of other rogues pop up for a story or two then leave just as quickly. There is no space in Brazill’s writing for character development or an overarching plot. To be clear, this is not an oversight on the author’s behalf, but a stylistic choice. The experience of reading Gumshoe Blues is similar to overhearing a conversation in a seedy bar. It is sometimes hard to follow, frequently vulgar, but fun too.

Gumshoe Blues begins with a hung-over Ord being summoned to meet the local Mr Big, Jack Martin. Martin wants Ord to find out whether any of the dancers at his strip clubs are selling sex on his premises. From that follows a series of shaggy dog stories including the search for a legless pub singer, a request to track down the father of the man who stole his wife – last seen running a protection racket in Durham – and other bizarre scenarios.

Gumshoe Blues is a quick read and I finished it in a couple of sittings. The lack of plot and the sheer number of characters can sometimes be a little confusing, but I soon found my place again, and its chaotic nature is a pleasant antidote to the somewhat formulaic fiction that typically conquers the best-selling lists.