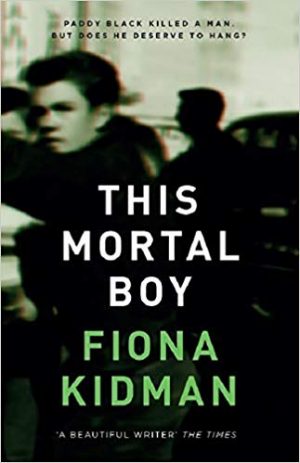 Written by Fiona Kidman — Based on a true story of one of the last executions in New Zealand, Fiona Kidman’s historical crime novel about a young man found guilty of murder is a powerful question mark. When is the death penalty justified? How does politics affect ‘blind justice’? How hard does the system try to preserve defendants’ rights? Fundamentally, what is justice?

Although the novel takes place in New Zealand in late 1955, the issues it portrays are germane to the more than 50 countries where the death penalty still exists today – where more than 60 per cent of the world’s population lives. What’s remarkable about this book is how Kidman brings forth issues like specimens under a strong light, showing them in all their complexity, with all their shadows and brilliance, without ever preaching or becoming polemical. You are reading a compelling story, not an essay.

Albert Black is a young man from tension-filled, divided Belfast, who leaves his parents and younger brother to immigrate to New Zealand for a fresh start and a better life. In a bar fight, he stabs Johnny McBride, the bully who’s been tormenting him. From his Auckland jail cell he reminisces about his upbringing on the other side of the world and his life during the two years since he left Northern Ireland. By vividly describing the various communities where Black has lived and his circumstances, as well as his actions, you reach an understanding of him as a fully rounded person. While Kidman doesn’t romanticise him, he is a character who inspires empathy.

In Wellington, he works and makes friends, but pulls up
stakes again and moves to Auckland in search of a higher-paying job so he can save
up and return to Belfast. He feels an outsider in New Zealand. That feeling turns
into grim reality when he’s on trial, and jury members hold his Irishness
against him. He’s ‘not one of ours,’ the judge says.

Kidman sets some scenes back in Belfast, where Black’s parents, especially his mother, struggle against the judicial establishment in frustratingly futile ways. She engineers a petition drive that receives thousands of signatures endorsing a commutation of her son’s sentence, to no avail. Kidman also provides insights into the mindset of the jurors – ‘set’ being the operative word – and the high-level discussions amongst the legal establishment regarding capital punishment.

The author skilfully uses the frame of the trial to enable comparison of retold events to witness testimony, and while there’s no doubt that Black attacked McBride, the circumstances make both the situation and the cause of death more ambiguous than they first appear or than the court ever hears.

Yes, Black makes bad choices – he’s barely 20 after all – and falls in with a dubious set of friends. But should he die for those decisions? While I personally had no doubt on how Kidman would answer that question, she’s not stacking the deck. She provides enough backdrop so that you understand the context in which members of the judicial apparatus, including the jury, came to the decisions they did. The Mazengarb Report had just been issued, positing a terrifying rise in juvenile delinquency and sexual immorality. A psychologist’s prison interview of Black comes from an astonishing place of moral judgment, for example.

Albert Black was hanged 5 December 1955. As Kidman says in an afterword, “A tide of disgust against the penalty overtook public perception after the hanging of Albert Black.” When a new government took over in New Zealand in 1957, all death sentences were commuted to life imprisonment, and in 1961, the death penalty was abolished.