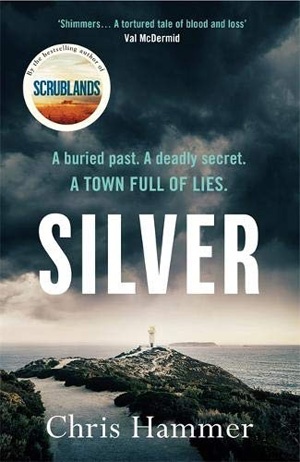 Written by Chris Hammer — We first met this author and his creation the world-weary journalist Martin Scarsden in the excellent debut novel Scrublands. With that novel shortlisted for the 2019 CWA John Creasy New Blood Dagger, Hammer and Scarsden are back and somehow it feels like they’ve never been away.

Silver opens just a few months after the drama of Scrublands unfolded, and much has changed. The formerly solitary Martin has hooked up with the lovely Mandalay Blonde and her baby son Liam and the trio are about to set up home far from the dustbowl of Riversend. Mandy has inherited a property at Port Silver on the coast of New South Wales. She’s gone ahead and is renting down there while the paperwork is sorted out while Martin stays in Sydney to finish the book he’s writing about what went on in Riversend.

Now he’s on his way and looking forward to being reunited with Mandy and Liam. But that excitement is tempered by apprehension too, because Martin and Port Silver have history. He was brought up in the little town and some of his happiest memories were created there. But there are also memories he’d rather forget, things he put aside when he finally left the place and never looked back. One of the joys of this book is learning, bit by bit, some of Martin’s back story.

He had some good friends in Port Silver and when one of them is murdered at Mandy’s temporary home Martin is first on the scene. He finds his girlfriend in shock, with blood on her hands, and fears the worst. Mandy maintains she is innocent – so who did kill local estate agent Jasper Speight… and why?

Following the goings on in Riversend, Martin is now an ex-journalist but his nose for a good story is still on high alert and soon he is digging into the background of Jasper’s murder. He’s dead set on proving Mandy’s innocence but, like Riversend, it soon becomes clear that there are deep undercurrents at play beneath the seemingly happy-go-lucky facade of Port Silver. The scene is set for another sinuously plotted, first-class slice of Australian crime fiction to unfold.

Martin had arrived at Port Silver with his sights set on the futire, but it soon becomes clear that his past is not about to stay buried. He reunited with his only living relative, Uncle Vern – the man Martin left behind, without a second thought, when he finally said goodbye to the town where he grew up. Luckily Vern is an accommodating kind of guy and the scenes which feature the pair are dazzling in their authenticity.

The same can be said for the lovingly created settings. Hammer revealed his skill at creating a sense of place in Scrublands, and it’s here again in spades. The portrait of a tiny seaside resort in decline is hugely engaging, and so are the characters that inhabit the place. There’s laid-back lawyer Nick Poulos, former champion surfer-turned-businesswoman Jay Jay Hayes and slightly creepy local man made good Tyson St Clair, for starters, plus a swami and a supporting cast of backpackers. Don’t disregard anyone, because they all play a part here.

As dramatic events unfold and the press pack descend upon Port Silver, Martin once again finds himself at the heart of a big story. It’s here that he really comes alive – but can he ignore the pull of an enticing exclusive for long enough to save his burgeoning relationship with Mandy?

Silver is a book that has everything: greed, intrigue, tragedy, murder, romance, friendship and even the odd light-hearted moment. I just flew through it and thoroughly enjoyed the ride. I think you will too. It’s out now on Kindle but if you want it in print you’ll have to wait until 9 January. A great start to the New Year!

For more atmospheric Aussie crime, try The Dry by Jane Harper, and take a gander at our guide to Australian noir.