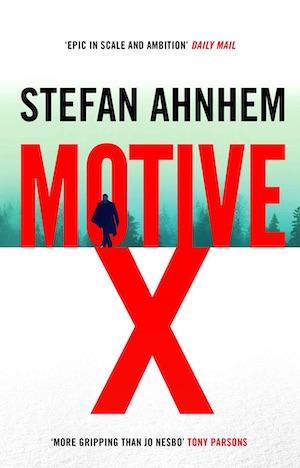 Written by Stefan Ahnhem, translated by Agnes Broome — Motive X is the third instalment in Swedish author Stefan Ahnhem’s successful Fabian Risk series and continues where Eighteen Below left off. The Risk family is still carrying the scars of being terrorised by a serial killer. Matilda, the youngest, lies in hospital in a coma while Fabian and his wife Sonja are trying to keep their marriage together after her affair and its dire consequences. Their eldest son, Theodor, is desperately trying to hide his involvement with a gang who were convicted of murdering homeless people for online entertainment…

With all that to cope with, Fabian is on leave while his crime squad partner Astrid Tuvesson is also off to complete her 12 step Alcoholics Anonymous programme. The squad is running on a skeleton staff without its two most skilled officers when bodies start piling up in Helsingborg. It seems a new serial killer is on the loose threatening the town’s safety.

The first victim is a Syrian boy found brutally murdered in a washing machine in the basement of his family’s apartment block. Initially the murder is interpreted as a hate crime, but when subsequent murders show few similarities the Helsingborg police are thrown off the trail and struggle to find a discernible motive for the killings.

Ahnhem doesn’t shy away from controversial topics. He addresses xenophobia, racism and the emergence of the Swedish alt-right head-on in Motive X. Social democracy and the welfare state in Sweden seem to be creaking under the weight of complex social issues. Immigration and the perceived threat to Swedish citizens could lead to desperate measures. The Swedish Democrats’ potential involvement in the murders are investigated and Lilja and Klippan, two of the team’s remaining officers, learn first-hand about the party’s sordid Nazi origins.

Motive X is crammed to the brim with overlapping storylines. Apart from the main plot concerning a serial killer with no apparent motive except for committing random acts of violence, there are two more threads involving crime of some sort.

Simultaneously, Fabian has to prove his growing suspicion that one of his close colleagues might also be a serial killer and that murders committed over years were deftly covered up by a member of the force. If you’re looking for a clear and final resolution to this particular mystery, don’t hold your breath. We’re left hanging and hoping this overarching storyline will conclude in the next Fabian Risk novel.

The team go on to unearth a sex-club and a suspect with his own set of criminal activities. Although all the storylines and family dilemmas threaten to confuse, somehow they don’t. They only add to the interest of Motive X and mean there’s hardly ever a lull in the book’s tempo. Ahnhem was a screenwriter on the Wallander TV series and the Irene Huss movies based on the books by Helene Tursten. This background is evident in the way he writes the action scenes and maintains the novel’s momentum across its 552 pages. The visual impact he brings means it reads like a movie.

There’s plenty of gore and violence, which can be unnecessarily graphic at times. If you find violence towards women and derogatory language offensive or disturbing, this might not be for you. It certainly explores the dark side of human nature, a characteristic so typical of Scandinavian crime fiction.

However, the more serious sections aren’t too overwhelming thanks to Ahnhem’s dry humour and his frequent references to Fabian’s obscure taste in music and snippets of music trivia. These give a little humanity to what otherwise seems a grim and violent world. It also confirms Fabian as a three-dimensional character with a fallible nature, especially when it comes to his family.

Motive X is more about the journey than the destination. It will keep you entertained from page one and there will be a satisfactory resolution at the end, albeit with some loose-hanging threads.