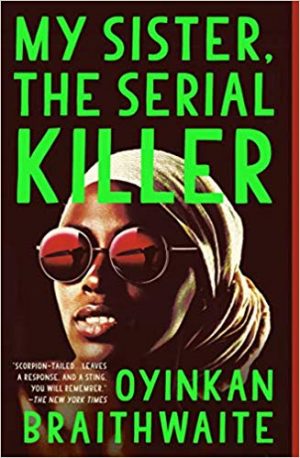 Written by Oyinkan Braithwaite — For a book about violent death and two sisters’ efforts to cover it up, this entertaining crime fiction debut from Nigerian writer Oyinkan Braithwaite is remarkably full of life. You can’t help but be charmed by the narrator Korede, who early on in her tale provides this advice: “I bet you didn’t know that bleach masks the smell of blood.”

It’s a lesson she’s learned the hard way, having had to cover up her sister’s crimes twice before and now dealing with a third corpse. Sister Ayoola’s boyfriends tend to have fatal encounters with one particular knife, once the property of their late father. Ayoola always claims self-defence, but Korede is having her doubts…

What’s so enjoyable about this book is how it bounces along, carrying you into increasingly fraught territory, particularly when Ayoola begins to show interest in a doctor whom Korede has set her heart on.

The sisters are complete opposites. Ayoola is strikingly beautiful and, given the privileges and indulgences that go along with that, she can afford to be feckless. Lacking Ayoola’s looks, Korede is the practical one, with a job as a hospital nurse, and fearful she must resign herself to giving up her own dreams for the future to protect her sister’s. The sisterly bond is more than the glue in this story, ultimately it is the book’s main subject.

Braithwaite infuses her narrative with insights into the culture of Lagos, Nigeria, establishing a strong sense of place. She also shows us the hospital where Korede works – the rivalries among the women staff and the administrators who do not lead. There’s not a shred of meanness in any of this, and much of it is quite funny. But the staff aren’t people Korede can be friends with, especially while carrying the burden of her sister’s deadly secret.

Over a period of weeks, she repeatedly finds herself in the room of a comatose patient, a Muslim man whose family is neglecting him. To him she unburdens herself, talking about her sister, and saying aloud some of the pain she barely allows herself to think about. These one-sided conversations seem to do him some good as well.

Then he wakes up. Korede asks, “You remember me talking to you?” “Yes.” “Do you remember what I said?” He remembers a few inconsequential things, then says, “Oh, yes. I recall you saying that your sister is a serial killer.” The story could take a disastrous turn at that point, but other than the three dead suitors and flashbacks to the girls’ difficult childhood with their alcoholic, amoral father, the it never turns dark, persisting in the effective cover-up promised by its early commentary about bleach.

That light touch when exploring serious matters and the extraordinary honesty of the writing may be what caused numerous publishers – The Washington Post, National Public Radio, Buzzfeed and others – to name it one of the best books of the year. My Sister, the Serial Killer gained a nomination for the 2019 Booker Prize, and was a finalist for the 2019 Women’s Prize, among other honours. Best of all, it’s fun!

If you find this setting intriguing, check out these five crime novels in our feature on Nigerian Noir.

Patrick Mahomes Reveals How Nickname “Bronze” Was Chosen for Baby Boy
Dwayne Johnson Responded To A Hilarious Video Of A Cow Raising One Eyebrow
GG Allin Getting a Biopic from ‘Lords of Chaos’ Filmmaker Jonas Åkerlund
Monsters Among Us: Why ‘The Mummy’ Endures 90 Years Later
Run to Ground by Stuart Johnstone