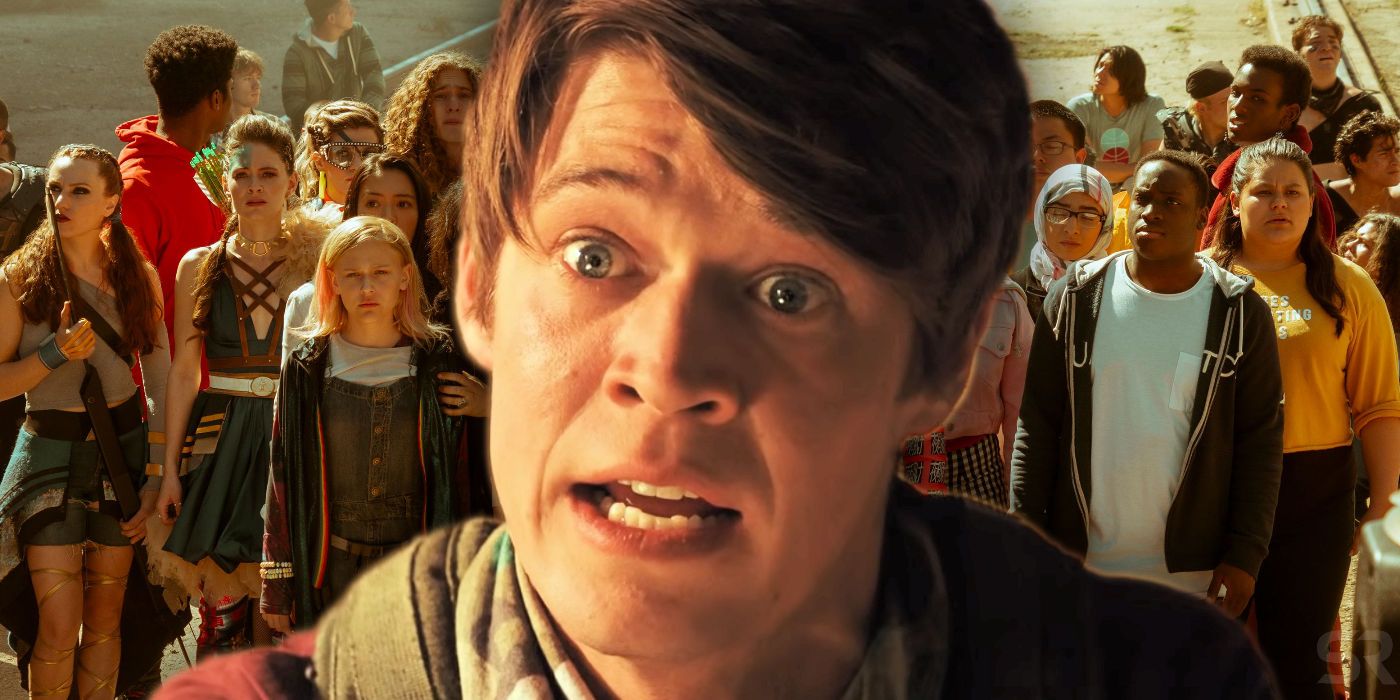 Daybreak season 1 stars Colin Ford (Under the Dome) as Josh Wheeler, a Los Angeles outcast who explains in-universe survival rules to the audience, and hopes to locate his long-lost girlfriend Samaira Dean (Sophie Simnett), otherwise known as Sam. During the journey, Josh receives help from young genius Angelia Green (Alyvia Alyn Lind), a rebellious pink-haired girl who epitomizes the essence of punk rock. In Daybreak season 1, the collective teenage angst contrasts with the calculating ways of principal Michael Burr (Matthew Broderick), who ultimately becomes known as Baron Triumph, the series’ Big Bad. Daybreak season 1 features a variety of post-apocalyptic cliques, along with adult zombies who can only utter their last words spoken prior to the big bang.

The Daybreak season 1 finale includes various showdowns, as the teenagers seek redemption and attempt to find peace of mind. But just when the immediate conflict appears to be resolved, Josh discovers that a new type of war has commenced. Here’s what to expect from Daybreak season 2.

Netflix hasn’t yet ordered Daybreak season 2. If the streaming service follows their usual schedule, a renewal or cancellation announcement will be made approximately three-to-six weeks after the series’ October 24 release date. Given that Daybreak season 1 hasn’t been an overwhelming smash hit so far, at least in terms of critical reviews, Netflix probably won’t announce future plans until December. If the streaming numbers are big, though, which only Netflix can know, then it’s possible that Daybreak season 2 could be renewed within a matter of weeks. Expect a decision before Christmas 2019.

If Netflix orders Daybreak season 2 in 2019, the new group of 10 episodes will undoubtedly release in 2020. The original shoot for Daybreak season 1 transpired over six months in Albuquerque, New Mexico, though future production could indeed be sped up and streamlined for a late 2020 release. We’ll predict that Daybreak season 2 will premiere in October 2020. But don’t surprised if it’s pushed until later in the year or early 2021.

Daybreak season 1 ends with the teenagers successfully launching a nuke into the mesosphere. Meanwhile, the self-proclaimed “Armageddon Jesus,” Principal Burr aka Triumph, is defeated in a moment of comic relief. Sam learns quite a bit during her experiences, which unsurprisingly goes unnoticed by Josh because he’s so lovestruck and assumes that survival will organically lead to romance. But the final twist in Daybreak season 1 shows Sam rejecting Josh and essentially taking the throne like a post-apocalyptic Daenerys Targaryen.

Josh was ready for love in Daybreak season 1, but it turns out that Sam is ready to lead. Moving forward, the concept that “all is fair in love and war” will certainly apply to Daybreak season 2. Now, the drama will seemingly focus on power dynamics amongst various factions. Josh will try to impress Sam, but will most likely have to form questionable alliances to establish a reasonable amount of control. Expect a new baddie to emerge in Daybreak season 2, a plot device used to ultimately bring Sam and Josh together.

More: All Of The Zombie Shows Available On Netflix Right Now

Jennifer Lopez Announces First New Album in Nine Years, This Is Me… Now
Trendy & Festive Outfit Ideas for Every Type of Holiday Party
Of Course, Reddit Post About Keanu Reeves Being The Sweetest To A Grandma Is Going Viral Again
CEO Trayle Shares New Video for “Craxk Flow”: Watch
When Zach Gilford Learned About His Wife’s Criminal Minds Role