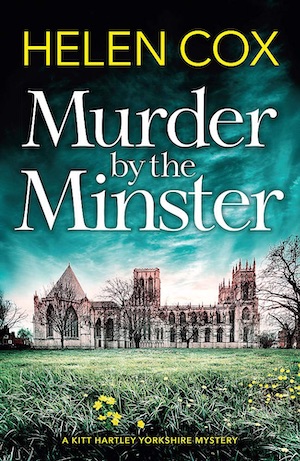 Written by Helen Cox — This debut mystery book by the author of two romantic novels is a mash up of cosy crime, comedy, romance, action (a thrilling car chase) and police procedural, featuring a librarian in the women’s studies department of a fictional university in the city of York. If it all sounds a bit unbelievable, then it probably is – it’s pure fantasy, though not in the genre sense.

If you fancy a comic caper round the snickelways (alleys) of York this novel featuring Trilby-wearing Kitt Hartley of the University of the Vale of York library, might be worth bagging for your Christmas stocking.

Detective Inspector Malcolm Halloran and Detective Sergeant Charlotte Banks arrive at Kitt’s desk to tell her that her best friend, Evie Bowes, is under suspicion of murder. Evie’s recently ex-boyfriend Owen has been found dead – poisoned and with a note pinned to his chest with a fancy fountain pen that has also penetrated his heart.

Kitt has read hundreds of mystery novels by the likes of Agatha Christie, Arthur Conan Doyle and Ian Rankin – how hard can it be to solve the crime and clear her friend’s name? So, she decides to investigate Owen’s murder, despite taking a bit of a shine to the DI.

She’s not well equipped to solve crime or fall in love. Her references are the books she is surrounded by at work and at home, she hasn’t had a relationship since she was dumped 10 years earlier and she wears a pendant etched with a quote from Jane Eyre. She’s prepared though, to put herself in harm’s way to prove her friend’s innocence and she confronts her suspects among a widening circle of connections. When two more bodies are found stabbed through the heart with a pen, it emerges the victims have all jilted their partners recently.

It looks like both Evie and Kitt and the victims’ dumped partners would have motives, but then, there are plenty of others in the same boat – probably half the dating population.

The no-nonsense librarian is smart and funny, however, and her banter with her assistant Grace and pal Evie is amusing, as is her rudeness to a cast of eccentric library regulars.

You may find the romances a stretch, with both police officers falling for suspects. The librarians’ roles are nothing like any I know, while the local journalist is portrayed as a hard-nosed bitch – who for starters don’t have time to go out on jobs and confront people in their workplace these days. Other clichés employed include a good cop / bad cop routine, a fiery female sleuth with red hair, a cast of eccentric sidekicks and an ancient psychic called Ruby whose predictions are rubbish. There’s a lot of lip-curling, telephones trilling, scoffing, eyebrow-raising, jaw-tightening and even Kitt’s inner bonfire igniting, to contend with.

However, sometimes a string of clichés is just what the doctor ordered for an entertaining romp and it has to be said that it is fun. There’s pace that kept the pages turning for a few hours and an over-the-top plot with the murderer on the prowl in the mean medieval streets.  As a York resident I enjoyed Kitt hanging out in familiar Rowntree Park and Bishy Road. The author’s got the vibe of living in the village atmosphere of the city just right – apart from the string of murders, of course.

You may be hard-pressed to guess whodunit until the last few pages when the murderer is revealed, rather than deduced. Despite the title (spoiler alert), the Minster is not a suspect, nor do the deaths happen in its hallowed precincts.

There’s no time to wait for the next Kitt Hartley mystery with book two, A Body in the Bookshop, out now for Kindle, followed by Murder on the Moorland in March 2020.

Helen Cox’s Kitt Hartley Yorkshire mysteries have been compared with the cosy modern crime series with a romantic twist by LJ Ross, featuring the tall, dark and handsome DCI Ryan, and set on Holy Island in Northumberland.

Lil Baby Shares Video for New Song “Real As It Gets”: Watch
HIV researchers find rare group of ‘elite controllers’ who could be a key to unlocking new treatments
Gigi Saul Guerrero Directing Horror Movie ‘Bingo’ for Blumhouse, Starring Adriana Barraza
Book Riot’s Deals of the Day for March 4, 2021
The Most Epic Royal Jewelry in History