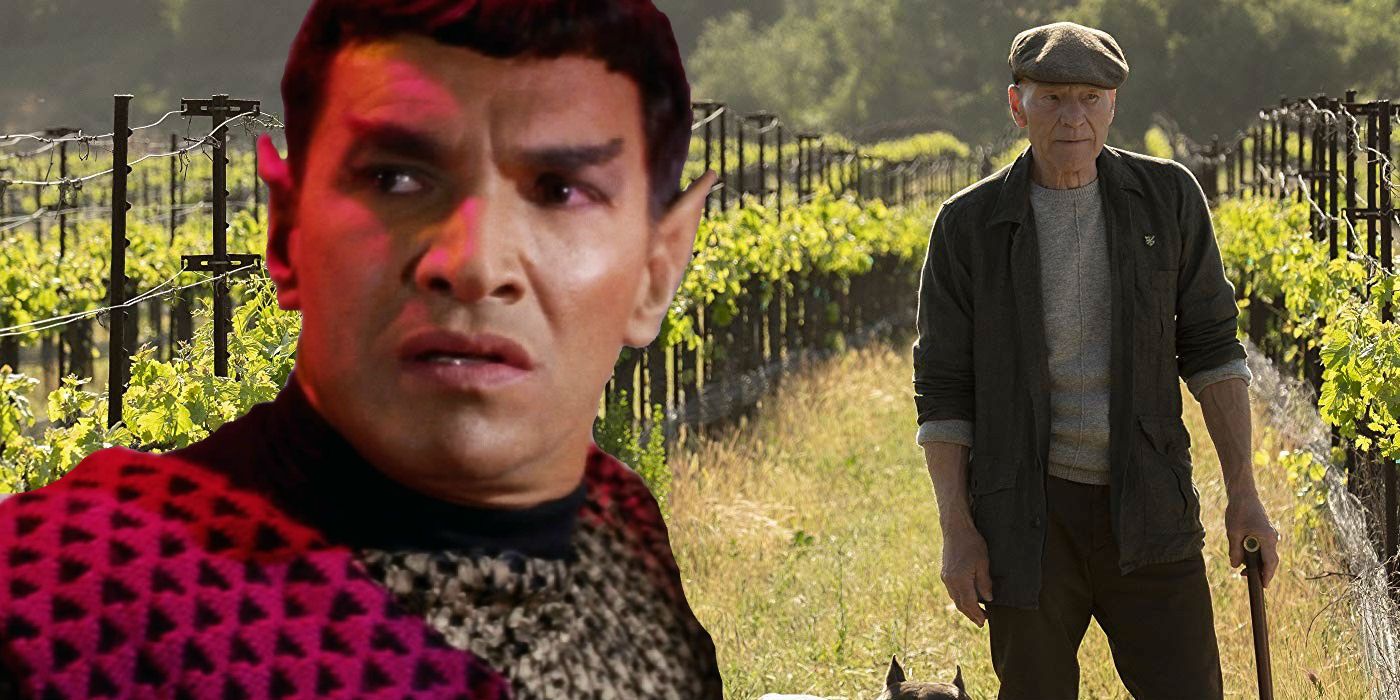 Do Jean-Luc’s Romulan assistants in Star Trek: Picard hint at a larger storyline for the alien race, or belie the title character’s true health? At the outset of Star Trek: Picard, Patrick Stewart‘s former Enterprise-D captain is found in retirement, making wine at his family’s vineyard. As evidenced by the trailer, however, it isn’t long before the pensioner breaks free from the comforts of Earth and sets out on another adventure to help a mysterious and powerful young girl in need.

Many key details regarding Star Trek: Picard‘s plot are currently shrouded in secrecy, but a few points have been revealed through trailers and cast interviews. The Star Trek: Picard footage released thus far highlights several Romulan characters in a particularly prominent role and at the recent Birmingham Destination Star Trek event, it was revealed during the Star Trek: Picard panel that the retired captain would be aided on his vineyard by two Romulans. Although it’s hardly unusual for a man in his 90s to need help around the house, Picard is not your usual nonagenarian and his relationship to these helpers could have a deeper meaning.

Related: Star Trek: The Last Time Two Shows Were On At Once

Star Trek: Picard is already confirmed to pick up from the continuity of the J. J. Abrams 2009 Star Trek movie’s Prime timeline, in which the planet Romulus has been destroyed. The canon Star Trek: Countdown graphic novel acts as a prequel to this and shows a post-Next Generation Jean-Luc Picard in his new role as Earth’s ambassador on Romulus, attempting to keep a fractious peace between the two races. Although the likes of Picard and Spock did their best to save the Romulan home planet, both are left with an immense sense of guilt at their failure. This moral weight might be highlighted by Picard’s employing of two Romulans as his personal assistants, and might even be the result of an attempt to round up and provide for Romulus survivors or refugees left without a home.

A second possibility is that, being in his later years, Picard requires more physical and medical aid than the Star Trek: Picard trailer lets on. The footage depicts Patrick Stewart’s character running through spaceship corridors, having sword fights and coming something close to the action hero he was in the 1990s. However, there are also scenes where Picard is walking with a cane, suggesting that his age may be more of an issue than the captain would like to admit. This fits with another claim made by Stewart at his recent convention appearance – that Star Trek: Picard takes influence from Logan.

Wolverine’s arc in Logan was that of a former hero with a failing body, struggling to do one last good deed before he dies. If Star Trek: Picard mirrors this theme, Patrick Stewart’s character could require medical and physical assistance at regular intervals. This is something that would likely be kept out of the more action-packed and exhilarating marketing material but would account for why Picard’s attempt at a new mission is questioned by Seven of Nine, Starfleet and a character who looks suspiciously like the Traveler.

It’s also vital to consider the Romulan-run Borg prison glimpsed in one of the Star Trek: Picard trailers. Obviously, not all of those rendered homeless by the destruction of Romulus will fall on their feet working on a cushy vineyard, and Romulan hostility is likely to increase in the wake of the 2009 Star Trek movie. Has Picard been attempting to unofficially continue in his role as ambassador, and avoid building towards another conflict, and is this goal part of the reason he heads back into space?

Indiana Jones 5’s Antonio Banderas Shares Details On How He Fits Into The Upcoming Harrison Ford Movie
The Best Men’s Razors You Can Buy In 2022
The Last of Us: HBO Drops Character Posters
Days of Our Lives Round Table: Really Dead or Salem Dead?
Popcaan Shares Video for New Song “Next to Me”: Watch