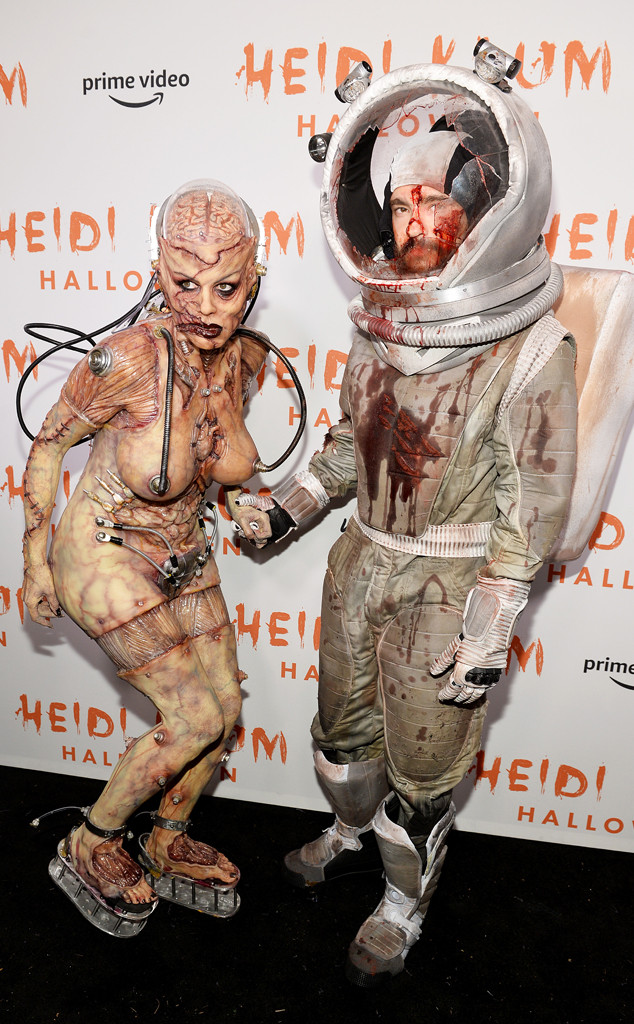 You can say Heidi Klum‘s latest Halloween costume was truly out of this world.

For the milestone 20th year of her signature Halloween party, the supermodel truly outdid herself. After embodying the likes of an ogre, butterfly, werewolf and ape among many, many more, the star topped herself once again as an alien that, let’s just say you don’t want to get close to.

Klum and husband Tom Kaulitz debuted their finished looks as they made their grand entrance to new NYC eatery Cathédrale, the site of the star-studded party this year, in a truck with glass walls adorned with biohazard symbols. The supermodel fully embraced her frightening and gory character as she hissed at reporters and photographers on the red carpet. As Kaulitz, it looks like he was dressed as the unfortunate astronaut who discovered her, as evidenced by his bloodied face and broken helmet.

As per usual, no detail was overlooked for Klum and Kaulitz’s costumes. The star spent the entire day getting into costume inside an Amazon Books store in the Big Apple. On Instagram, she announced her location and invited people to visit while also sitting in front of a window for those on the street to observe.

And, for those who couldn’t make it to Manhattan, the star also chronicled the getting ready process on Instagram, updating fans as late as 10:30 p.m. that she was indeed still in the makeup chair.

Of course, the team’s hours of long work were worth it as the couple took the party by storm once they showed up.

A round of applause is certainly deserved—and, like always, we can’t wait to see what Heidi comes up with next Halloween!

Until then, take a walk down memory lane and revisit all of her standout costumes over the years with E!’s gallery below! 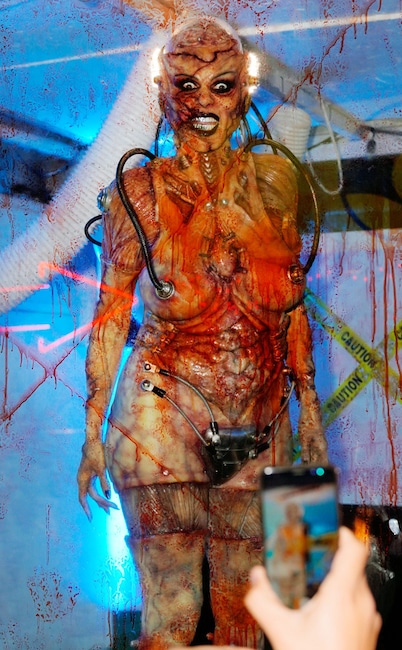 Heidi’s costume was truly out of this world as a gory alien. 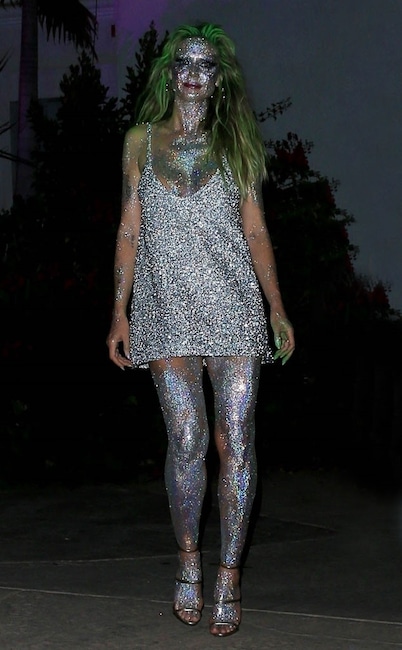 It seems the model took inspiration from the “fireworks” that new hubby Tom Kaulitz makes her feel. 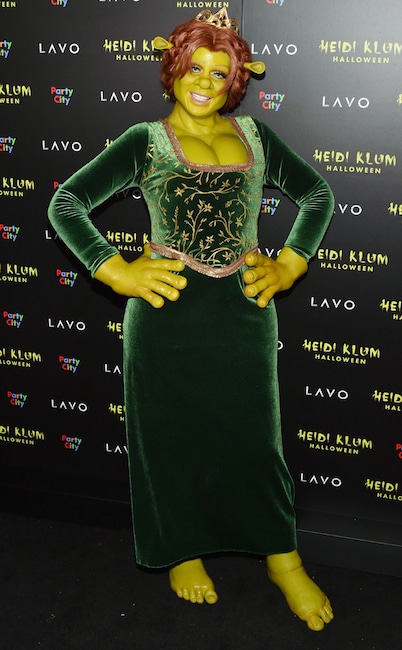 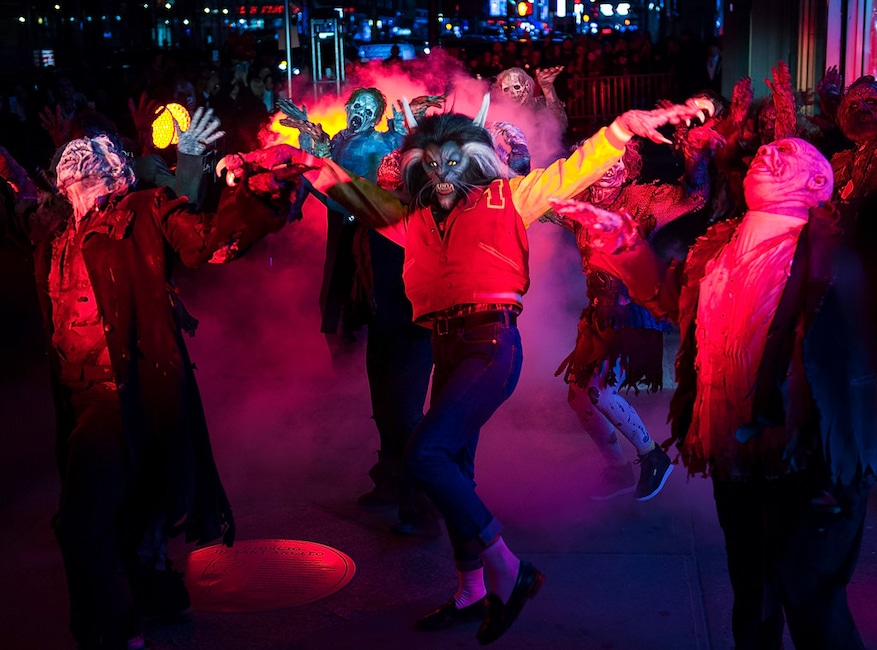 The America’s Got Talent judge dressed up as the werewolf from Michael Jackson‘s ”Thriller” music video. 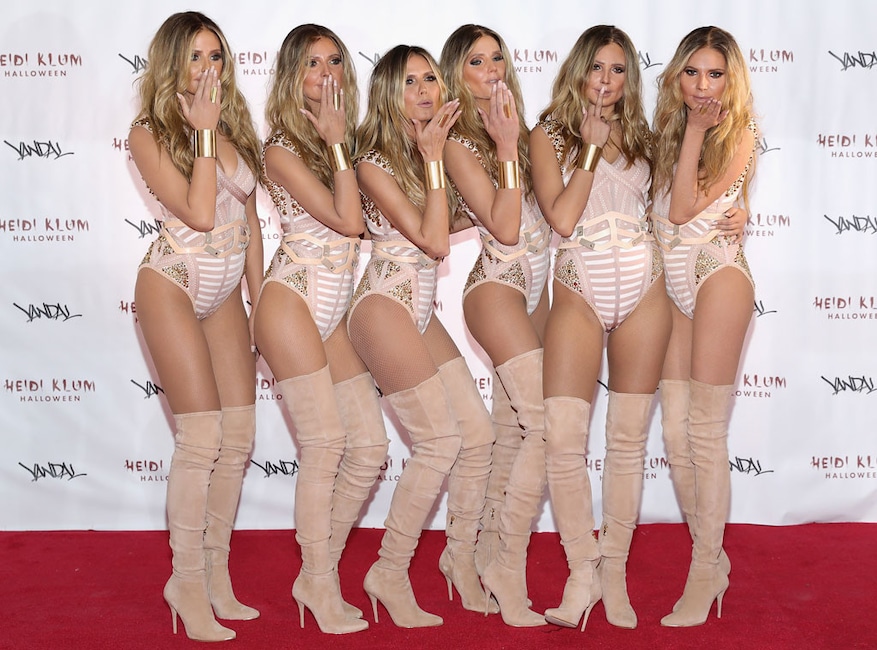 Instead of transforming into someone else, Heidi Klum opted to clone herself five times with the help of prosthetics and some fabulous wigs. 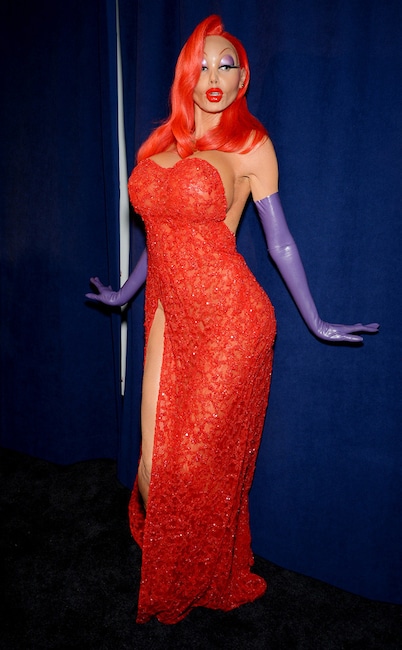 Heidi Klum is known for stepping out in outrageous Halloween costumes, so lets take a look back at her wackiest and most wonderful getups from years past. 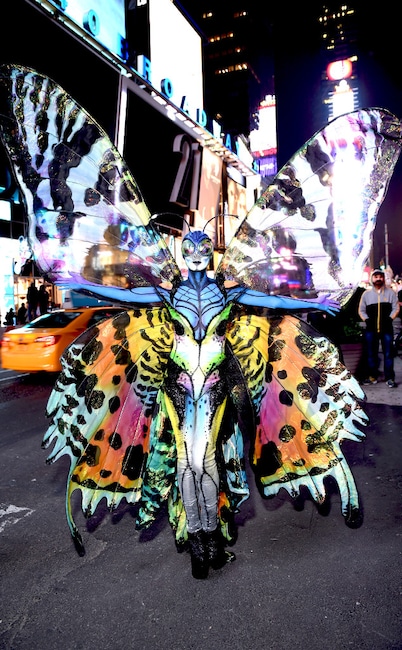 “They said, ‘Are you really in there Mama?'” Klum told E! News, talking about he children’s reaction to her butterfly costume. 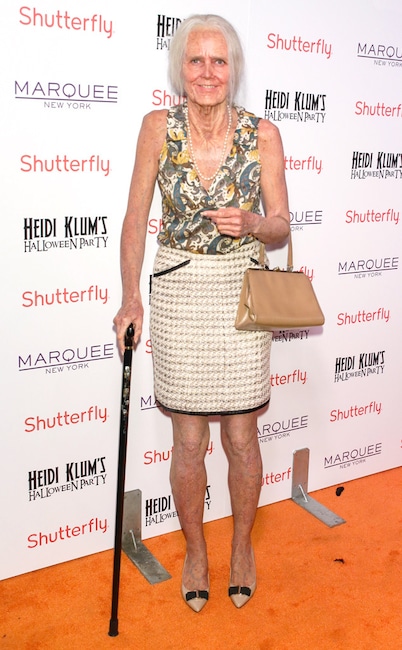 “The one time that I [looked] like me but older, they were scared,” Klum told E! News, talking about her childrens’ reactions to her Halloween costumes. 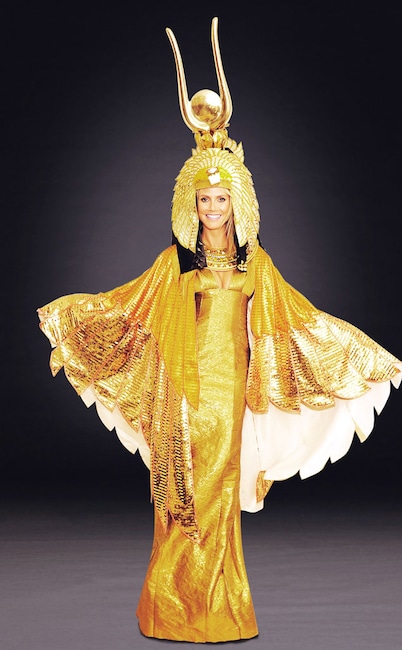 Heidi gives Elizabeth Taylor a run for her money in this chic Cleopatra costume. 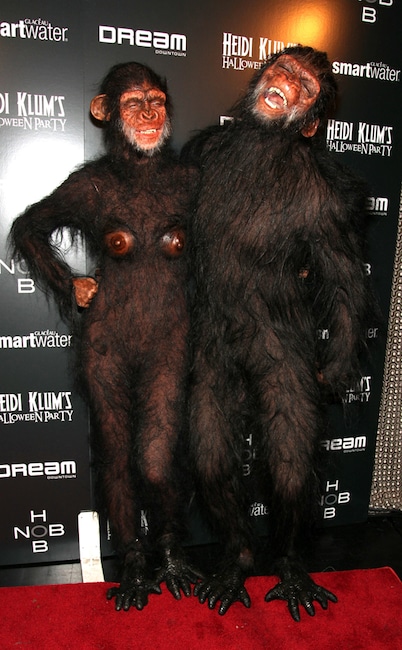 Heidi is just bananas about her ex. 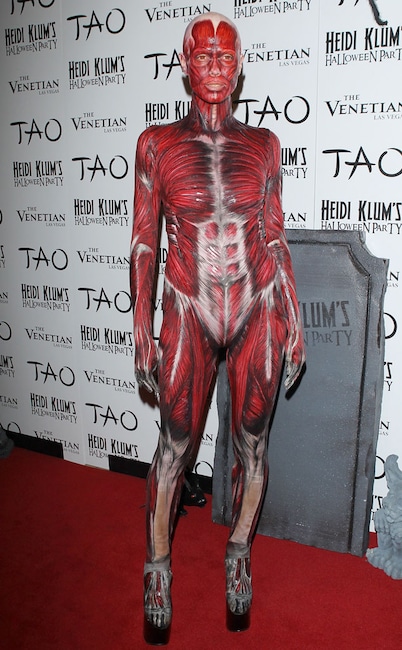 The former Victoria’s Secret Angel looks like she hopped right out of an anatomy text book. 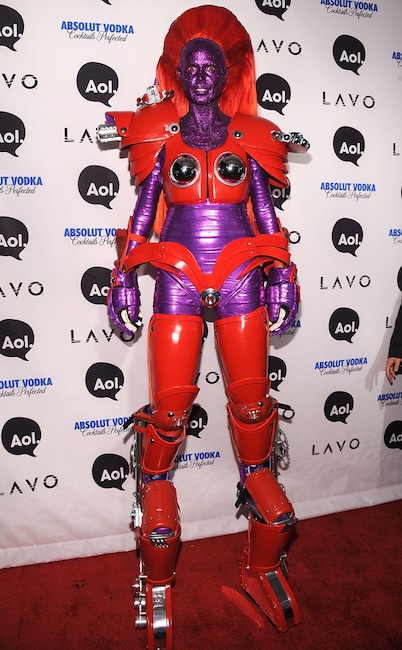 Heidi is tall, but not that tall. She’s actually wearing stilts to make this robot monstrosity more monstrous. 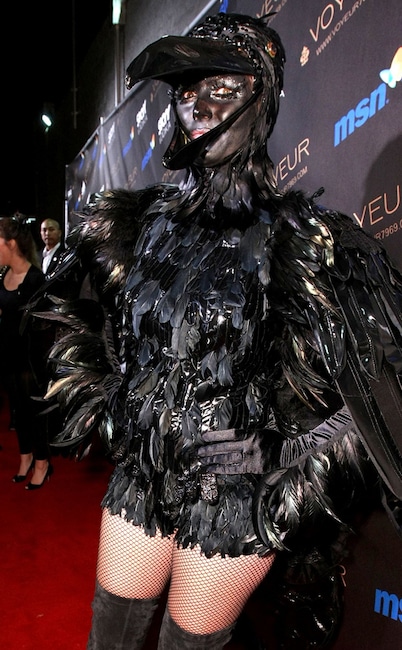 Little known fact about crows: a group of them is called a murder. Perhaps that’s why the model chose the bird for her haunting costume. 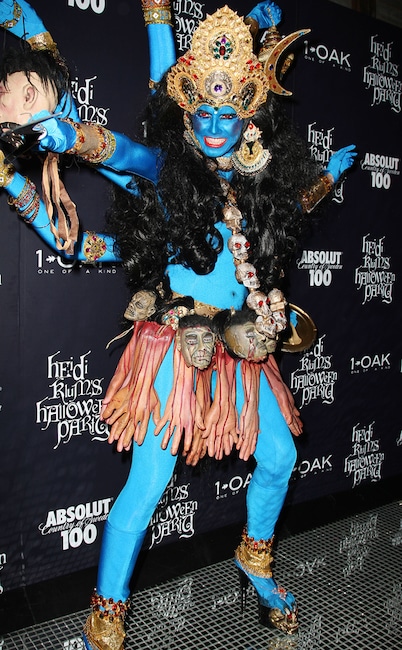 No, this isn’t the Genie from Aladdin. It’s actually the Hindu goddess of death and time, Kali. 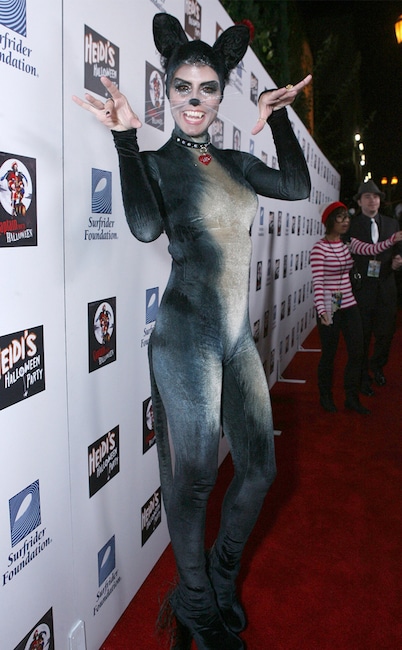 This cat costume might as well be straight out of Taylor Swift‘s new CGI movie Cats. 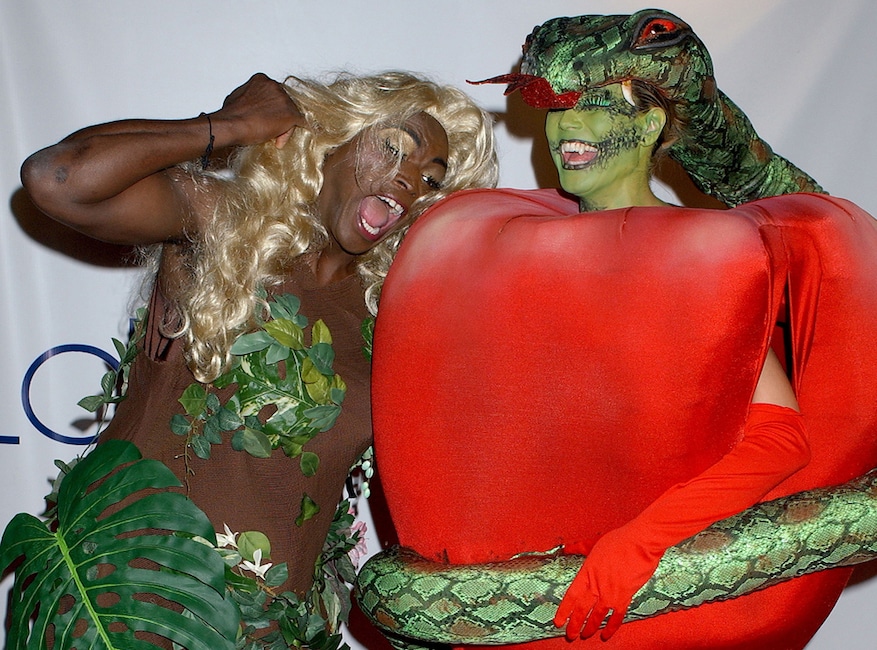 Heidi is the apple of our eye in this costume inspired by the biblical tale of Eve and the forbidden fruit. 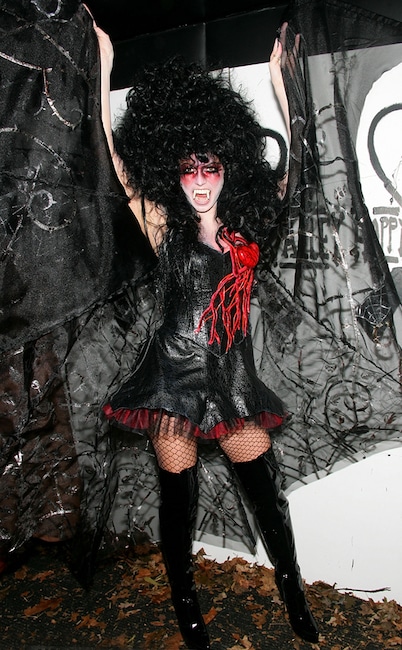 This look is bloody delicious! 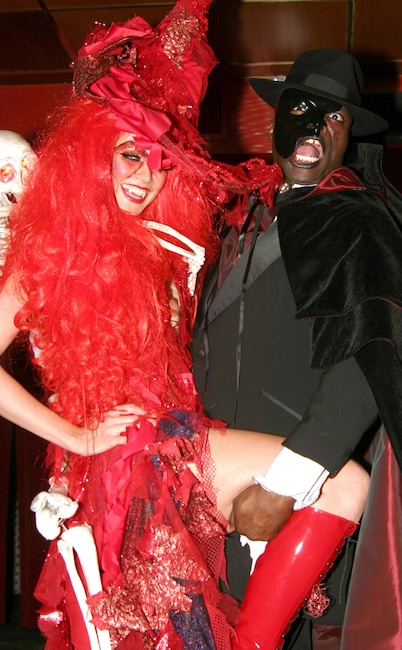 Not all witches wear black, you know? In fact, this witch had a lacy costume that included a fake skeleton. 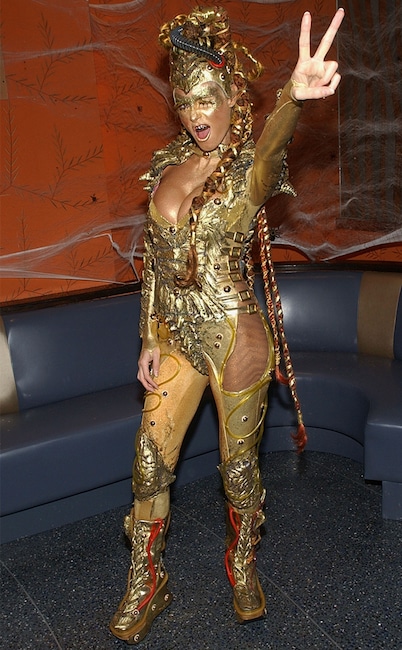 Gladiator goddess or sci-fi dream? Either way this vivacious look goes down as one of her best costumes. 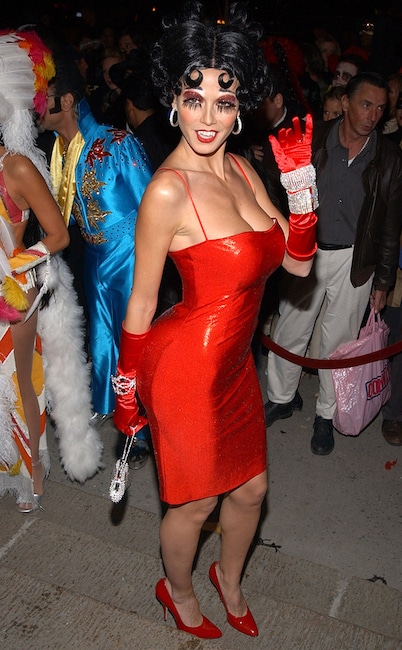 For dressing as a cartoon figure, the European model makes a striking match for Betty Boop. 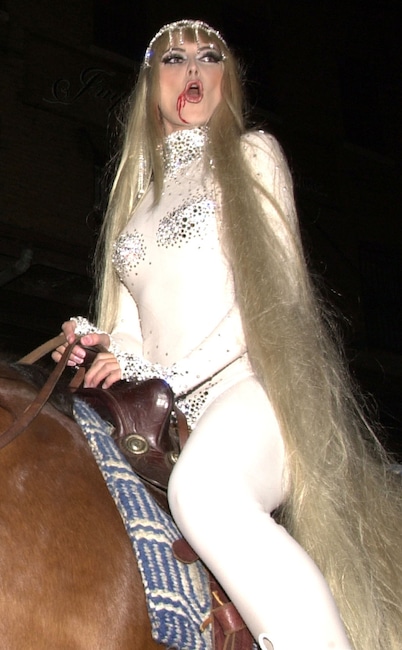 Unlike the woman that inspired the folklore, Heidi sported a full bodysuit and covered her private bits in jewels and a long wig. 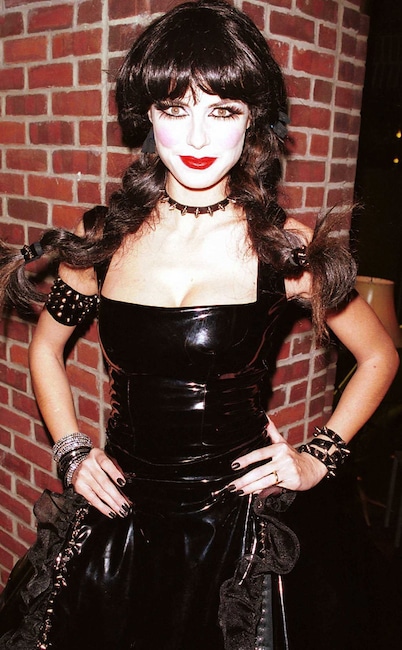 It’s rare to see the blonde bombshell in such a dark look and yet she pulls it off.