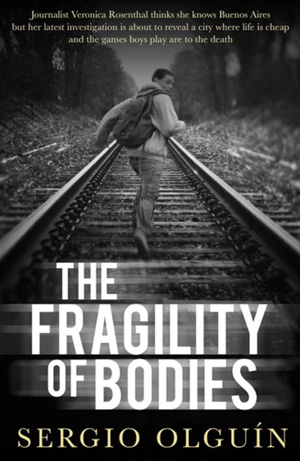 Written by Sergio Olguín and translated by Miranda France — Award-winning Argentine novelist Sergio Olguín’s fast-paced 2012 crime novel is now available in English for the first time. It’s not surprising it was made into an eight-episode television series in 2017, called La Fragilidad de los Cuerpos, because it has all the elements of an engaging, visually arresting drama.

Glamorous investigative journalist Verónica Rosenthal, who works for the news magazine Nuestro Tiempo, lives a privileged life in Buenos Aires. She has excellent social connections and access to insider information through her father’s prestigious law firm and isn’t loath to use these advantages to advance her career. She’s pursued by attractive men, has loads of friends, drinks and smokes too much, but she’s serious about her investigative work. As a character, she’s fully developed, as are most of the men she interacts with, old and young.

The scanty wire service story of the suicide of a railwayman captures her attention when it quotes the man’s apology for the crimes he committed, especially the death of a child. Was the letter a confession or an explanation? Verónica proposes that she investigate and her editor gives her the assignment, not expecting much. If you enjoy the banter and oneupsmanship of the newsroom, as I do, you’ll find this comfortably familiar. Even more satisfying is the archetype of the crusading reporter, which Verónica fulfills with dedication and truth-telling.

The editor’s low expectations are quite misplaced. As Verónica doggedly pursues the faint leads she can dig up, she learns the obvious stuff first: suicide by train is rather common. It’s apparently committed without thought to the damage to the drivers of the killer trains who see the catastrophe coming, yet are helpless to prevent it. Some of them can never drive again.

If these garden-variety suicides weren’t bad enough, she learns about a diabolical new game. At night every few weeks, a pair of young boys of about 10 years old play chicken with the speeding trains, standing on the tracks and waiting until the last possible moment before jumping out of the way. Occasionally, they wait too long. Olguín provides a vivid description of how the driver hears the snapping bones underneath when a train demolishes a person. Having been on a train that encountered a small herd of deer on the tracks, I can attest to the fact that that sound is unforgettable.

Verónica is put in touch with a train driver and finagles her way into riding up front with him when one of these near-misses with the boys occurs, and the danger and fear bring them together. The fact he’s married does not prevent quite a bit of luscious sex between them. The sex is great, and he wants to help her with her story, but eventually, it’s all too much for him.

Though most chapters are from Verónica’s point of view, some are not. Olguín shows you the poverty of the children involved in this deadly game, and their poverty isn’t just a lack of money, it’s the lack of a future. You lean that they are playing for money – money they spend on soda and snacks. By letting you get to know these boys a bit, Olguín makes their contests – how they think about them, how they prepare – into high-tension, truly horrifying encounters.

It takes Verónica a bit of time to peel back the layers of crime and corruption exploiting the children in this callous way. While many in their marginal community are unaware of what is going on and some are simply turning a blind eye, she also identifies several heroes – people who want to speak out but don’t know how. While they are helpful to her investigation, as it continues, they need protection, and she must shelter them as best she can. The closer she comes to the ringleaders, the greater the danger. Yet, no matter how thin the ice she’s skating on, Verónica has a knack for brazening out a situation with characters high and low that will leave you amazed and chuckling.

The admirable translation by Miranda France is so smooth, you’re never aware it is actually a translation. An unusual, brilliant read.

We did a rundown of Latin American authors a few years ago, and since then, we’ve seen stories set it the tangled US-Cuban politics. More on that soon!