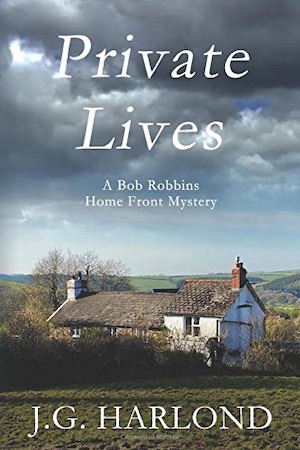 Bob Robbins is intent on getting away from it all at the start of Private Lives, JG Harlond’s latest slice of cosy historical crime. We’re at the height of World War II and former policeman turned insurance man, turned reluctant policeman once more, Robbins has decided to take a few days’ break on the North Devon coast.

He’s planning a little bird watching and not much else. But fate has other ideas, and when twitcher Robbins witnesses a shooting incident on a derelict farm he’s soon back in harness again.

Robbins calls in the local constabulary, but when no trace can be found of the elderly male victim, his testimony is treated with a pinch of condescension. The discovery of the body of a much younger man changes that. With the Bideford police at full stretch, Robbins calls in help from colleagues in the Cornish police force and a reinforcement arrives in the shape of young PC Laurie Oliver.

The pair take up residence at Peony Villas, which is run by the enigmatic Jessamyn Flowers and is acting as a temporary home to a dazzling array of theatricals who are touring Devon and Cornwall. It’s a bright and breezy counterpoint to the drabness of wartime Britain and some of the best scenes in this book take place inside the bohemian B&B.

Robbins and Oliver try their best to solve the mystery of the missing man and the dead farmhand, but there’s something off about it all. It’s going to take some good old fashioned detective work, alongside a liberal pinch of copper’s gut instinct, before this mystery can be put to bed. Meantime, there are some strange goings-on at Peony Villas too, and when Mrs Flowers bats her eyelashes and asks for Robbins’ help, he can’t find it within himself to say no.

Private Lives is set in the late summer of 1942 and JG Harlond is adept at creating an authentic wartime feel within its pages. The attention to detail is second to none, from dialogue which sounds just like it could have been taken from a black and white newscast from the era. With blackout restrictions, secretive manoeuvres and rationing, the reader is fully immersed in the life and times of a country under threat of invasion.

That sense of history is tempered by a wry sense of humour which is especially in evidence within the walls of Peony Villas and the comings and goings of its residents, and also in the interchanges between Robbins, Oliver and the irascible locals. A particularly memorable scene is set in a pub, where the local cider is revealed to be a weapon of mass destruction (particularly when doled out to an unsuspecting young copper).

The murder mysteries are handled well too, with one solved in a most ingenious fashion and both leading Robbins and Oliver on a merry dance. Meanwhile, lovers of the modern-day police procedural will find some entertainment in comparing and contrasting the methods used to crack crime less than 80 years ago. No mobile phones or DNA testing here!

If anything slows down the narrative pace, it is the sheer volume of characters who feature in this tale. Luckily, the author has created a ‘cast list’ which sits at the start of the book, but it’s a bit of a faff dipping back and forth to double check who’s who. That aside, things run along quite swimmingly.

Fans of gory, punch-in-the-gut thrillers should probably steer clear, but Private Lives is a perfect fit for those who love intelligently rendered cosy crime, with the added bonus of a finely focused historical element too. It’s the second book in the Bob Robbins series – the first was Local Resistance – and fingers crossed there will be more to come.

Take a look at our 10 best historical crime novels, compiled by Barry Forshaw. North Devon is also the setting for Ann Cleeves’ new series, which begins with The Long Call – reviewed here.