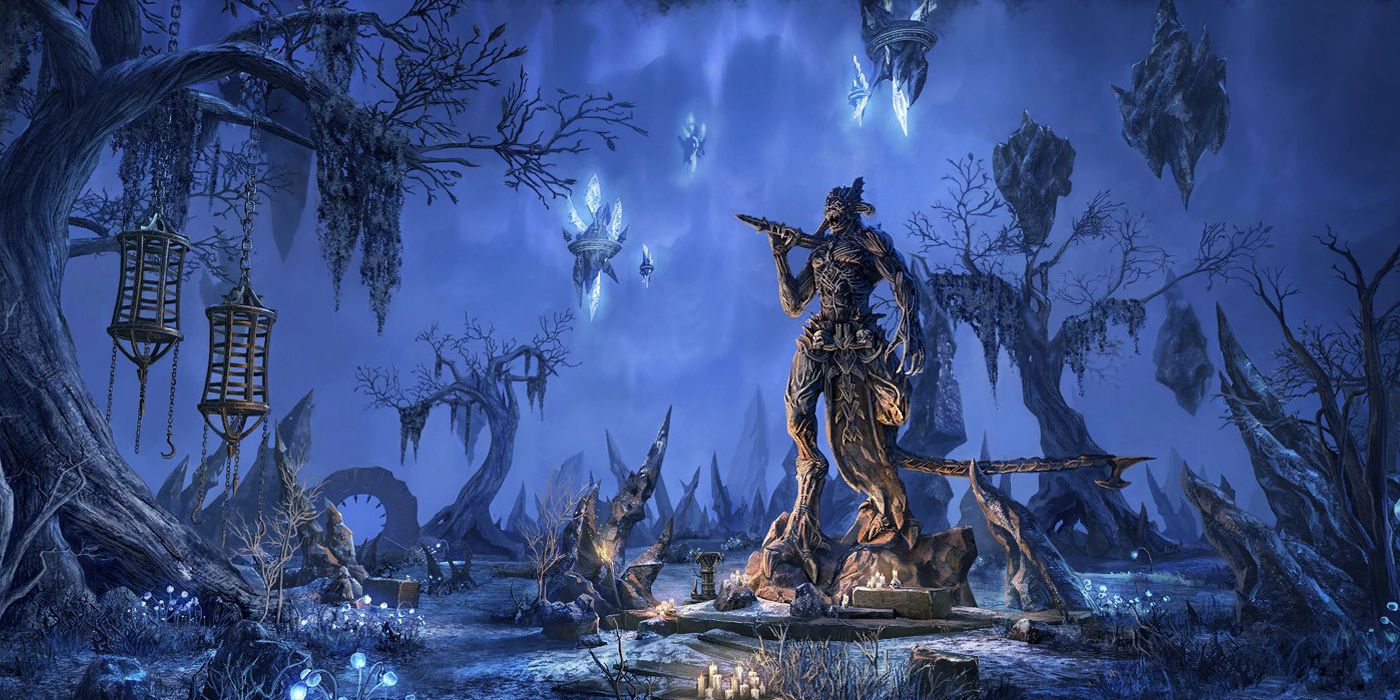 The Elder Scrolls series has seen its fair share of expansive worlds and interesting landscapes. From the lands of Skyrim to the planes of Oblivion, these games have taken players on adventures across multiple dimensions untrodden by other mortals. Still, The Elder Scrolls Online includes a few locations never seen in the rest of the long-running series.

Before The Elder Scrolls Online, or ESO, The Elder Scrolls: Arena took players across almost the entirety of Tamriel, a fictional continent on the planet of Nirn. ESO covers much the same area as Arena, but its massive HD render of Tamriel reimagines the lands as they appeared in Arena and Elder Scrolls‘ other five main installments, also adding places where the player character of Arena never set foot. Bethesda Softworks and ZeniMax Online Studios even took ESO to new planes of Oblivion, the fictional realm of the Daedra, that had previously been left unexplored.

The new, non-Tamriel areas are not constrained solely to the planes of Oblivion, however, as other realms can be explored. The realms of gods and the dreams of mortals have both become the playgrounds of the Vestige, the title of the player character in ESO. These and the new realms linked to Tamriel all have much to offer the player in aesthetics, if not always in content.

Coldharbour is the fortress of the main antagonist of ESO, the Daedric prince Molag Bal, and has never been properly explored in an Elder Scrolls game prior to Online. The plane of Oblivion ruled by Molag Bal’s iron fist serves as a land of fear and danger for the people of Tamriel and also as the final boss battle’s location.

While Coldharbour is the epitome of despair, The Five Finger Dance is a tropical paradise. The realm of Baan Dar, a lesser god of the Bosmeri, or Wood Elves, The Five Finger Dance welcomes tricksters and those with cunning minds. Baan Dar invites guests to his party manor to celebrate and be merry after successfully pulling one over on people in a grandiose manner.

However, not all of the Wood Elves’ Valenwood is sunshine and glory – for an evil seeks to turn it into a realm of darkness and fear. The Shadow Wood is a dark reflection of Valenwood, accessible through Dread Vullain (once known as Vullain Haven in The Elder Scrolls: Arena).

For the Redguard race, The Far Shores are a land of no hunger, thirst, or fatigue, only challenges for the warrior spirit. Not unlike the Nords’ Sovngarde, the Far Shores is the afterlife of the Redguard people and a place of great significance for the race of proud warriors.

The Daedric prince of dreams, Vaermina, has taken up shop in the Orsimer General Godrun’s dreams, and she doesn’t seem content to leave without force. The dreamscape is a twisted realm of Oblivion that seeks to take over the good general from the inside out, though it does have a certain charm.

The Refuge Of Dread

The Refuge of Dread is a part of the realm of Daedric Prince Mehrunes Dagon. Dagon sought to use this area to kickstart his Oblivion crisis.

The realms of the Elder Scrolls Online are far-reaching and expansive. With the announcement of the new Stonethorn DLC, there is sure to be more for players to explore, soon.

Next: Elder Scrolls Online Plus Trial Makes Most DLC Free To Play Until Monday

Braxton Kimball is a writer based in Orlando, Florida. He is a college graduate of Full Sail University in Winter Park, Florida with a Bachelor’s of Science Degree in Entertainment Business and his first official position is as a freelance writer for Valnet working with Screen Rant with a particular focus on Dungeons and Dragons. Braxton Kimball has spent the last four to five years of his life playing Dungeons and Dragons, Pathfinder, and many other Tabletop RPGS. He is an experienced DM and an avid gamer with many topics to discuss regarding his position and other positions in gaming.