“Special Day”…and indeed it was the day singer, songwriter, musician Jon Butcher released the single, a prelude to his album with the same name coming out later this year. “Special Day” is a high spirited, politically charged reggae beat global music phenomena. The illegitimate child of Nile Rodgers and BB King, Butcher’s music is a dazzling design of color, texture and plenty of heart.

Hailing from Boston, Butcher has shared the stage with greats including The J Geils Band, B.B. King, Leland Sklar, James Taylor and other legends. “Special Day” is just a delicious taste of what is yet to come upon release of his album. It’s an explosive exploration into what Jon calls, “Future Blues.” The Grammy nominated singer/songwriter and guitarist “ is one of a select handful of influential recording artists who emerged from the legendary 80s Boston music scene.” 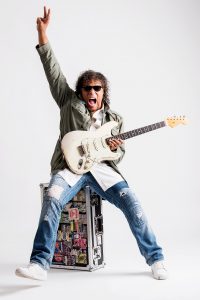 Jon himself considers his newest art the best album he’s ever done. When listening to Butcher’s music I all of a sudden felt simultaneously small and powerful. I wanted to record the song and imprint it in my blood so it would quietly linger there forever. When something catches your ear you like it to be repeated endlessly because you can’t get enough of it. That is the effect Jon Butcher’s songs have on his audience. Butcher’s music, miraculous guitar work and story-telling lyrics makes your soul shine…….

The official website for Jon Butcher may be found at https://jonbutcher.com

Lil Wayne Claps Back At Mark Cuban, ‘I Will Piss In Ya F’n Mouth Ho’
Amber Heard Grilled on Cross-Examination About Alleged Bottle Assault
Vince Camuto Sale: Last Day to Shop These 15 Finds Starting at $7
Under the Banner of Heaven Season 1 Episode 5 Review: One Mighty and Strong
‘Zombies 3’ Shambles Onto Disney+ This Summer