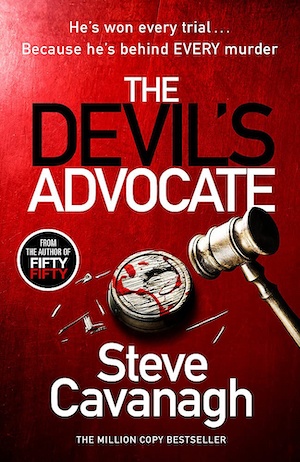 This is a guy who can rise above most situations, whether by guile, good luck or a combination of the two. But when an unexpected visitor sends Eddie to Alabama, he’s a fish out of water and soon gasping for air.

The visitor to Eddie’s New York office is Alexander Berlin, someone we met before in The Liar, where he was working as a clandestine fixer for the State Department. Now Berlin is doing more classified work, moving around government departments, solving problems, and he has a proposition for Eddie. Although the lawyer is adamant that he doesn’t want to listen, soon he is fully on board.

Berlin’s story involves a 19-year-old black man falsely accused of murdering a young white woman in Sunville County, Alabama. The place is home to a corrupt police force and District Attorney Randal Korn holds the dubious record of having had more prisoners put to death than anyone else in the whole of the USA. Suddenly Eddie is all ears, and that’s why we soon find him and his team in the Deep South, where they are made to feel anything but welcome.

In just a few meaty chapters, Cavanagh has set the scene for an intriguing, and utterly engrossing, narrative – and it just gets better and better. As the drama develops, so the tension ratchets up too. Don’t expect to see much of your bed until you’ve reached the final full stop of this one.

Eddie might be the main man here, but he would be nothing without the disparate band that supports him. There’s Harry Ford, a retired New York Justice, who acts as his consultant and wingman, Kate Brooks, Eddie’s sharp-as-a-tack law partner, and Bloch, the enigmatic, mostly silent, hard as nails investigator who would make an ideal love-match for Jack Reacher. Together they make a perfect team, and Eddie is going to need every one of their skills before this thing is over.

But back to Sunville County, where Korn rules the roost and is not about to get knocked off the perch he has commanded for 17 years. He’s a beautifully rendered bad guy, pale as a corpse, unsmiling and forever carrying with him an insidious scent of death and decay. The guy is bad to his very core – and he is about to become Eddie Flynn’s most formidable opponent yet.

In Buckstown, Eddie attempts to see his new client, Andy Dubois and is thwarted at every end and turn. This case is going to be no easy ride, and it takes some of the lawyer’s trademark skulduggery before he can actually lay eyes on the innocent young man. Andy has been set up for the fall. From the off it’s clear that everyone believes he is guilty and no one is going to help his defence team.

What follows is gilt-edged Cavanagh, and you’ll find yourself groaning in frustration, laughing out loud, crying out in shock and even occasionally cheering as the tale unfolds. The courtroom scenes are clever and satisfyingly unpredictable. If you love Michael Connelly’s Lincoln Lawyer or the work of John Grisham, then you’re going to feel right at home.

Sometimes it is a dangerous move to take your protagonist out of his usual environs but it really works here, and the Deep South setting adds extra layers to the narrative. All of the characters are meticulously drawn – love them or hate them, they jump off the page, and it’s great to see Bloch in particular getting her moment in the spotlight.

I devoured this book in a couple of sittings, determined to savour each clever twist and turn. It’s one of those special reads where you desperately want to get to the end but also want to make it last as long as possible. I take my hat off to you Mr Cavanagh, The Devil’s Advocate is your best Eddie Flynn book yet!

Read our interview with the author here.