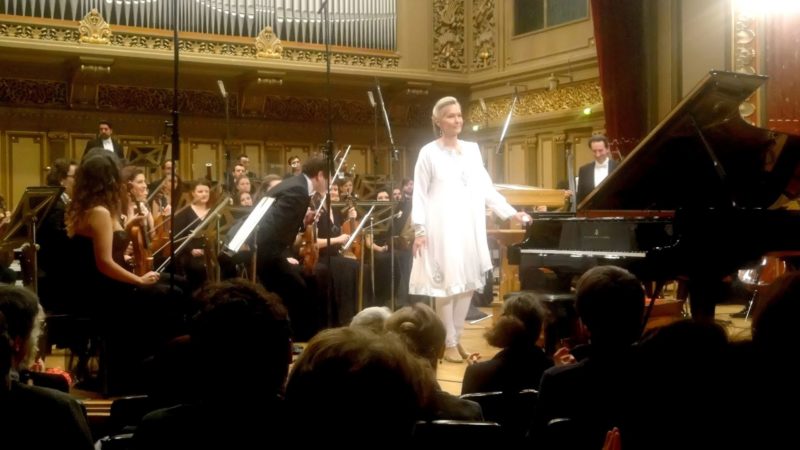 Elizabeth Sombart’s approach to music is well-rounded on a technical level but other aspects of her gifts deserve mention. She’s headed the Fondation Résonnance since 1998. It’s an organization whose aim is bringing classical music to segments of the population who may not otherwise be exposed to its riches. It adopts a relatively cutting edge approach, as well, to teaching through establishing piano schools observing no restrictions on age, jettisoning competitions and exams, and embracing free teaching principles.

Her recorded work, however, has built the bulk of her reputation. There’s good reason for that. She has a significant discography in the rearview mirror and her most recent efforts revisiting Beethoven for modern audiences sets the stage for her latest collection. Singing the Nocturnes delves into Frederic Chopin’s finest piano compositions. The twenty-one tracks recorded for this release are presented simply, minus any gimmickry, and Sombart’s connection with the material and her immense skill.

Sombart recognizes the unique flexibility of Chopin’s work. Each of the twenty-one Nocturnes can be regarded as individual compositions, none exceeding the eight minute mark, or as pieces of a larger compositional puzzle. There’s a clear design at work here. Many of the individual pieces begin with a low-key demeanor before gradually evolving through a succession of different tempos and moods. I especially enjoy the playful interjections rife throughout the second half of many pieces.

You won’t find a lot of Sturm und Drang in the individual compositions though Chopin isn’t averse to dialing up the intensity. One gets a sense of absolute artistic control, however, listening to Singing the Nocturnes – the ebb and flow of the record never wavers, nothing feels rushed, and Sombart’s interpretative gifts never overshadow the compositions themselves. The album’s production is fine tuned to capture both the dramatic and understated portions of the twenty one pieces – the former has profound physicality while the latter lends itself to introspection without ever veering into despair.

The second half of the Nocturnes ratchets up the aforementioned drama. It is incremental rather than accomplished in one fell swoop, but Sombart’s contributions are critical. Her touch is key to pulling these performances off; she has an unerring connection with her instrument that’s the product of both skill and discipline. She’s chosen an excellent composer to highlight, as well – the melodic attributes of Chopin’s work make him one of the more accessible candidates for modern audiences to enjoy. Even non-fans of classical will like this collection if they give it a chance.

One often hears people unfamiliar with classical music deride it as boring. Elizabeth Sombart’s take on Chopin is far from that. She approaches these pieces with a great deal of personality you hear over the course of the record’s twenty-one tracks without ever belittling the seriousness of the task in front of her. Elizabeth Sombart’s Singing the Nocturnes doesn’t have a vocalist present on any of its tracks, but the French pianist helps Fredrich Chopin’s compositions sing with breathtaking relevancy. It’s a full-bodied and rewarding release from the first performance through its final moments.

Fake Drake Enters (His Own) Terms of Celebrity Boxing Real Drake
Johnny Depp is All Smiles Boarding Private Jet in Paris
Umbrella Academy boss rewrote entire season after Elliot Page came out: ‘It’s a credit to Elliot’
Jussie Smollett Makes Rare Appearance at the 2022 BET Awards
The Best Hair Dryers Of 2022 To Level Up Your Locks