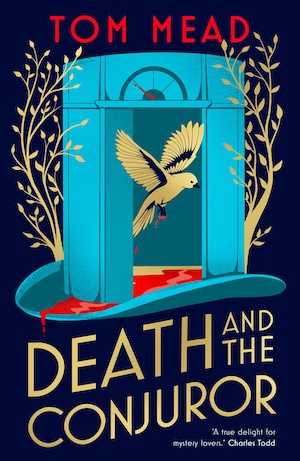 Debut author Tom Mead is receiving considerable publicity for his historical mystery Death and the Conjuror. The story takes place in 1936 London, with its lead characters the elderly showman and conjuror Joseph Spector and Scotland Yard detective George Flint. Flint hopes Spector’s skills at misdirection can lead him to figure out what really happened in this strange case, which involves not one, but two locked-room murders.

German immigrant Dr Anselm Rees has recently relocated to London, along with his daughter, Dr Lidia Rees. Mead wisely sets the story a few years before the gathering war clouds would have complicated things even further. The elder Dr Rees – sometimes referred to as a psychologist and sometimes as a psychiatrist – has gradually acquired a list of only three patients. They are the musician Floyd Stenhouse, actor Della Cookson and author Claude Weaver.

When Lidia and her playboy boyfriend Marcus Bowman arrive home late one night, they learn Dr Rees’ throat has been slit. His body was discovered by his patient, Cookson, and the housekeeper. Cookson arrived late in a frantic state seeking the doctor’s advice.

For one reason or another, all three patients become suspects, along with an unidentified evening caller. So are Lidia, who stands to inherit, and her boyfriend Bowman, who needs the money. The door to the office was locked, as were the French windows, with the keys on the inside. The rain meant no one could have left by the windows without leaving muddy footprints in the flower beds. It’s a locked-room mystery in that fine tradition with a surfeit of clues, red herrings, and suspicions.

On the evening of another unproductive day of investigation, the detective Flint receives an urgent call from the musician Stenhouse. He thinks he’s been followed. Flint and his sergeant hurry over to Stenhouse’s lodgings. While searching the unlit garden, they hear a shot then chase a shadowy figure whom they lose down a dark alleyway. Preoccupied with this problem, they are about to discover the second locked-room dilemma. The elevator operator is dead inside his small cage.

At times it can be a challenge to figure out who is really taking the lead on this case, as Flint and Spector pursue various lines of inquiry. However, while Spector provides occasional interesting disquisitions about the creation of illusions, his potential doesn’t seem to be fully exploited in the novel. Stories about illusionists and real-life magicians usually include some spectacular demonstrations. In the end, inexorable logic wins out.

Because the setup of the two murders is so complicated, a lot of space is required to explain them with various theories posed and discarded. Such elaborate story-parsing tempts the reader to look for holes. Apparently, the author was worried we might not accept his explanations and has included footnotes referring back to the page on which a particular clue was buried.

I’ve never seen this done before and am not sure it builds rapport with the reader. It almost seems like he’s responding to anticipated reader objections. The message seems to be, ‘See, here’s where I tricked you.’ Mead could have trusted his readers’ memories and their concomitant faith in him to believe he hasn’t misled. One of the footnotes I did check refers to a physical description that I would not have pictured as it turns out to be in the denouement.

You may have the sense – despite the automobiles, hairstyles, and a few other signals – that this story could just have easily taken place 50 years earlier, given the dialog, the background narration and many of the characters’ attitudes. It has a definite old-fashioned feel. On one hand this is part of its charm, on the other it may distance you from engaging with the characters.

If you’re a fan of locked-room mysteries, or the Golden Age of murder mysteries, the clever and complicated plots the unknown antagonist concocts will likely keep you guessing all the way through.

Magic and illusion can also be found in the mysteries That Old Black Magic by Cathi Unsworth or The Summoning by JP Smith.