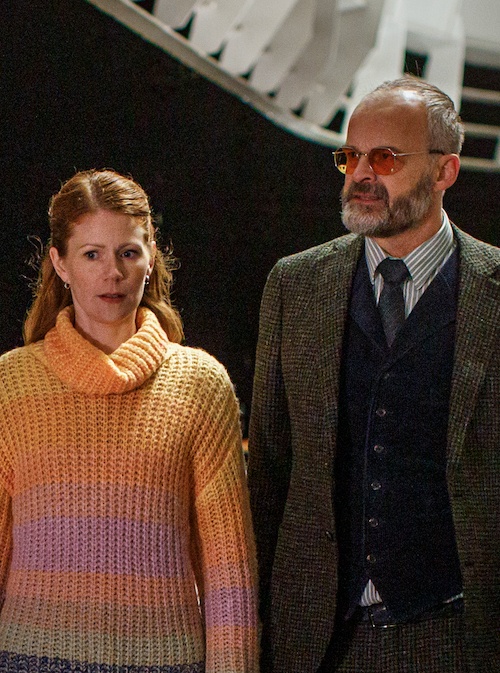 Klara Sandberg is a reality TV producer who’s had an epiphany. In the middle of the brainstorm for MILFs Hotel season seven, she decides all the ideas are rubbish. The whole thing is rubbish. She’d rather be doing something more important, something that matters. Perhaps something involving life and death. Just as she’s about to get fired, resign, or both, she has a better idea: a reality show in which the famous police detective Sven Hjerson solves crimes by reading the minds of the suspects live on TV.

It’s a brilliant concept. The only trouble is that Hjerson hasn’t been seen for a decade – not since accusations of planting evidence ended his career. Klara must locate him in order to save her job, but has no idea what she’s getting herself into.

If you’re wondering where Agatha Christie comes into all of this, that’s almost as complicated. In some of her Poirot novels, and The Pale Horse, Christie included a character called Ariadne Oliver who in some ways resembles a criminal profiler. Like Christie herself, Ariadne is a novelist, only she writes about a Finnish detective called Sven Hjerson. The makers of Agatha Christie’s Hjerson have licensed the character from Agatha Christie’s estate and reinvented him in a modern Scandinavian context.

So, the programme is by no means a typical Nordic noir production. In fact, its look, feel, pace and quirkiness is more similar to the Poirot series, which was loved by millions for 24 years on ITV. Hjerson, played by Swedish actor Johan Rheborg, is fastidious about his appearance. He gets his hair and beard trimmed every day and has a wardrobe filled with exactly the same shirts, trousers, jackets and shoes. Just like Poirot he is confident and aloof, deducing things about people before they’ve spoken, in a manner similar to Sherlock Holmes.

However, he is not quite clever enough to elude Klara and, when she finds out that he’s due to board a pleasure cruise around the Åland islands on the Baltic, she packs a bag and leaves her new husband and teenage daughter behind. But while she tries desperately to cross paths with, befriend and impress the irascible Hjerson, a crime is afoot. The lights on the cruise ship go out, and when they come on again the journalist Aida Fabris lies dead. She was on the voyage to cover the launch of a new eco battery but it appears she and others have been manipulated with dark intent.

While the ship’s security chief is certain nobody could have tampered with the power in spite of the evidence, with his police background Hjerson decides he is best placed to identify the killer. He has four hours before they dock in Mariehamm… Finally, the flamboyant Klara – wonderfully played by Hanna Alström – has the chance to win him over by becoming his investigative assistant.

Airing on More4 at 9pm on Friday 26 August, Agatha Christie’s Hjerson is an unusual production. It’s bright and colourful and zips along with a caper-like atmosphere. Hjerson takes himself all too seriously. Klara doesn’t take herself (or anyone else) seriously enough. The ship is suitably glamorous and tacky, with touches of art deco suggestive of the main character’s Agatha Christie origins. Just like Murder on the Orient Express, nobody can leave the ship, which means that the passengers are stuck with a killer and soon it’s not just Aida who’s lying on a slab.

In tune with its lighthearted style there’s very little blood or violence on screen, making it more than suitable for anybody who loves a good bit of cosy crime fiction. Although its roots are in Golden Age crime fiction the show doesn’t feel old fashioned at all. It’s good to see this sort of mystery executed with a modern vibe. As the series continues, the pair will tackle a new case every couple of episodes, including a man dressed as a chicken who has disappeared; murders copying a series of mystery novels; and an attempt on Hjerson’s life.

This is the first time a spin-off character from the Agatha Christie canon has been adapted to become a television series. First aired across Scandinavia in August 2021, it consists of eight 45-minute episodes. This is Hjerson’s first appearance with English subtitles. You’ll also be able to stream the episodes via Walter Presents.

For more crime shows to check out, click here.