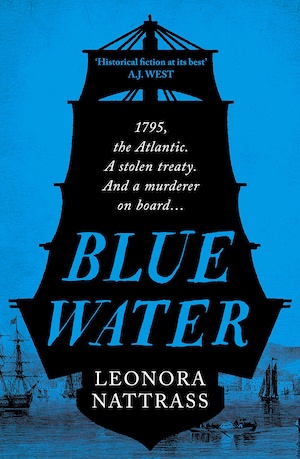 Last year, Leonora Nattrass took the historical crime fiction world by storm with her debut novel, Black Drop, which was picked as a Times Book of the Year. As Blue Water opens, the ripples of what happened back then are still rocking Laurence Jago’s world.

The gorgeous cover and title offer a huge clue as to the setting of this book. We are afloat, on the mail ship Tankerton, departed from Falmouth and heading to Philadelphia. Alongside a motley crew are a diverse group of passengers. Among their number is Jago, of course, along with his dog Mr Gibbs; journalist William Philpott; Theodore Jay, son of American envoy John Jay; his slave and valet Peter Williams; and War Office official Frederick Jenkinson.

It is 1795 and France is in the midst of revolution. Also on the passenger list is Comtesse de Salles, a French noblewoman fleeing her country, accompanied by her nephew Max, a former soldier in the French Royalist Army. An American businessman called Obadiah Fletcher, who nobody likes or trusts, arrives on the vessel just as it is about to leave England and rubs everyone up the wrong way from the offset.

As the book opens Lawrence Jago is in disgrace, having left Whitehall under a cloud. He is mulling over the offer of an apprenticeship to Philpott, while watching everything and saying very little. Meanwhile, in the hope of redeeming himself he is compiling a report to Foreign Secretary Lord Grenville in Downing Street. And Grenville has also given him another task: to ensure that the important treaty Jay is carrying to the USA gets there safely.

That’s quite an ask because the treaty’s terms are divisive and controversial. While some want to see it brought to fruition, others would be happier if it never saw the light of day. A short time into their journey and still quite a distance from their first stop at Madeira, a cormorant lands upon the vessel at the height of a storm – a sure harbinger of bad luck, according to the superstitious sailors. What follows seems to underline their fears, because soon a passenger is dead and the treaty has vanished.

Blue Water is a mystery with sea salt running through its veins and the whiff of ozone and intrigue emanating from every page. Who has killed Jenkinson, a man who had taken it upon himself to guard the treaty – telling nobody, not even his confidante Jago, where he had secreted it. A search of the ship reveals nothing. Could it have been thrown overboard? Jago isn’t convinced. Meanwhile, there is a murderer on board to add to the trials and tribulations of a perilous crossing to America.

The story unfolds tantalisingly slowly, sneakily teasing the reader into thinking one thing, then the opposite, until our powers of deduction are as tossed about and confused as any seafaring passenger. Nattrass has obviously done tons of research and she imbues the book with a deep sense of history, creating characters who appear all too realistic and situations that are lovingly wrought.

I loved the depiction of life at sea and all its dramas, rituals and regulations. The narrative is shared between Laurence Jago’s reports and those of the ship’s captain, which are short, to the point but strangely revealing. We are also privy to Philpott’s florid missives to his loyal readers back in Blighty. The latter are hugely entertaining, particulalrly in regards to the seamen and their myriad myths, legends and superstitions.

This is a book that tends to scud along like a well trimmed trader, though I occasionally found myself in the doldrums due to the sheer number of characters in play. Fans of Patrick O’Brian’s historical naval stories will find much to enjoy here, while crime fiction lovers looking for something well plotted, absorbing and a little different to their usual fare will enjoy Blue Water too – I know I did!

For more great books in this genre, take a look at Barry Forshaw’s pick of the best historical crime novels.