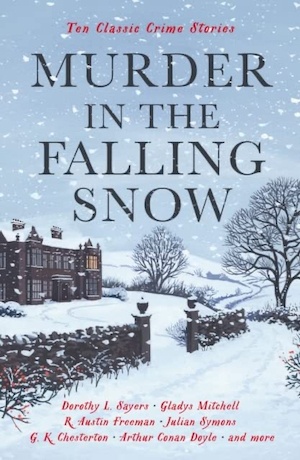 Edited by Cecily Gayford — Murder in the Falling Snow brings you ten festive stories of murder and mayhem by some of the early-20th century’s best crime writers. From country houses to trainlines, rustic pubs to suburban terraces, the stories feature perplexing mysteries solved by canny detectives in environments now synonymous with classic crime fiction. While some of the included tales have been reprinted in recent years in various of the British Library’s Crime Classics anthologies, others have long been out of print, which makes their appearance in this collection a real treat for fans of stories from the Golden Age of Detective Fiction.

If there’s one thing better than a murder at Christmastime, it’s a slightly spooky murder at Christmastime, and editor Cecily Gayford has made sure to include a couple of fine examples of such works in Murder in the Falling Snow. For instance, in The Mystery of Felwyn Tunnel by LT Meade and Robert Eustace, private detective John Bell is engaged by the chairman of the Lytton Vale Railway Company in Wales to investigate the mysterious death of a signalman who was killed while on duty at the mouth of Felwyn Tunnel. Given the strange circumstances of the man’s death and the tunnel’s reputation for being haunted, there’s a fear that an apparition may have caused his death.

In a similar vein, the opening story in the collection, Gladys Mitchell’s Haunted House, sees John and Morag Graham host a Christmas party for a small group of friends at their new, isolated and very possibly haunted house. The party is not a success. What’s worse, a heavy snowstorm means that the last remaining guest – a man rumoured to be having an affair with Morag – is forced to stay at the Grahams’ house. Ghostly footsteps are heard overnight and, come the morning, Morag doesn’t wake up. Is it the ghost or one of the two men who is responsible for her untimely demise? Of course, while both of these stories have a supernatural aspect, it’s the people involved that the detectives have to pay attention to as they attempt to unravel the fiendish truth behind the crimes.

While Mitchell’s most famous sleuth, the redoubtable Mrs Bradley, doesn’t appear in her featured story, a number of famous crime-fighting faces do appear in Murder in the Falling Snow. Perhaps most prominently, the dynamic duo of Sherlock Holmes and Dr John Watson feature in Arthur Conan Doyle’s The Adventure of Abbey Grange, which requires the world’s only consulting detective to solve the murder of the detestable Sir Eustace Brackenstall at his ancestral home. The circumstances of Sir Eustace’s death are peculiar, but Inspector Stanley Hopkins believes the murder to be the work of three notorious burglars known to be operating in the area. However, Holmes is convinced that there is something more sinister afoot and his attempts to find out more cause this story to shed unaccustomed light of his view of morality.

For his part, the deceptively astute Father Brown teams up with gentleman thief Flambeau and attempts to unravel the truth behind the death of General Sir Arthur St Clare in GK Chesterton’s The Sign of the Broken Sword. While the fact that the general met his death in Brazil during his regiment’s infamous last stand against the forces of President Olivier is well known, Father Brown suspects there was something more to it. The motivation behind his decision to dig up the past is never really made clear, but his wordy recitation of the gathered evidence to Flambeau allows a sense to dread and intrigue to build throughout what is otherwise a fairly passive investigation.

Rounding off the group of supersleuths, R Austin Freeman’s series detective Dr John Evelyn Thorndyke appears in Mr Ponting’s Alibi, in which he assists a clergyman who is concerned that his fiancée, Miss Millicent Fawcett, has been receiving threatening notes and may be at risk of violence from her impecunious stepbrother, the eponymous Mr Ponting. While Thorndyke sadly arrives on the scene too late to save Miss Fawcett, he does a sterling job of cracking a case in which all the possible suspects have seemingly ironclad alibis. When the whole thing seems impossible, only Thorndyke’s organised method and scientific insight can uncover the minute piece of evidence that cracks the case wide open.

Although an appearance by Lord Peter Wimsey would have been welcome, in Dorothy L Sayers’ Sleuths on the Scent, it is the delightfully named Mr Montague Egg who takes refuge in the bar-parlour of the Pig and Pewter during a snowstorm and finds himself with an opportunity to unmask a fugitive from justice. A number of other people are likewise sheltering in the hostelry and, as their convivial talk turns to the whereabouts of suspected murderer Gerald Beeton, it becomes increasingly likely that the killer might be hiding among them. Unmasking the murderer relies on insight into the life and business of the typical commercial traveller, a character once a staple of crime fiction who has since been erased from the genre by the passage of time.

A similarly chance encounter proves equally fateful in Julian Symons’ Meeting in the Snow, where Francis Quarles offers a lift to a hitchhiker on a particularly miserable winter afternoon and ends up embroiled in a murder mystery. The hitchhiker turns out to be the nephew of Quarles’ old friend John Landon and, when Quarles agrees to accompany his passenger to Landon’s home, the stately Clinton House, the two discover that Landon has been murdered sometime earlier that day. Unfortunately for the murderer, Quarles sees to the heart of the matter before the police even arrive on the scene, which provides an archetypal illustration of the gentleman detective at work.

In a departure from the other stories in the collection, The Reprisal by Michael Innes concerns a theft rather than a murder, although the reputational damage associated with being thought guilty of the crime could still prove devastating. The item in question is a gold salt seller crafted by Cellini for Pope Clement VII, which has been in the possession of Lord Funtington’s family for several centuries. When the salt seller goes missing during a party hosted by Funtington’s wife, Sir John Appleby is called in to investigate. In doing so, he faces the classic ‘country house crime’ scenario and uncovers some of the startling hypocrisy that can lurk behind a façade of respectability.

There’s also a wonderful sting in the tail in Edgar Wallace’s The Chopham Affair, which involves the killing of Alphonse or Alphonso Riebiera, a known cad and blackmailer based in Paris, whose body is improbably discovered on Christmas Eve in an idling car in Chopham Common, London, alongside the corpse of notorious cockney car thief Joe Stackett. Although famed lawyer Archibald Lenton is able to craft a convincing reconstruction of the crime, something altogether different actually happened that night… This is arguably the only story in the collection that can’t be solved alongside the detective, but it still makes for a captivating and convincing mystery.

The final story, Off the Tiles by Ianthe Jerrold, has a similarly dark and twisted plot, even though the death of Miss Lillah Keer after she fell from the ice-covered roof of her house initially appears to have been a tragic accident. Yet, as Inspector James Quy launches an investigation into the matter that should have been merely a formality, he quickly discovers that there might have been far more to the ‘accident’ than meets the eye. There’s only a small cast of characters but, as should be expected when reading a classic puzzle mystery, it doesn’t pay to focus on the most likely suspect. As the sad truth emerges, Inspector Quy is left to muse on the self-sabotaging inflexibility of the criminal mind, which represents an unaccustomed analysis of the psychology of crime.

Although they differ in tone, complexity and outcome, the ten stories included in Murder in the Falling Snow are alike in terms of their ability to entertain and intrigue, with each evoking classic elements of the festive season while turning what is traditionally a time of celebration on its head by introducing shocking, tragic and even sometimes understandable crimes into the mix. As a whole, the collection represents a great means of whiling away a cold winter night.

For another festive murder mystery, check out A Christmas Murder of Crows by DM Austin.